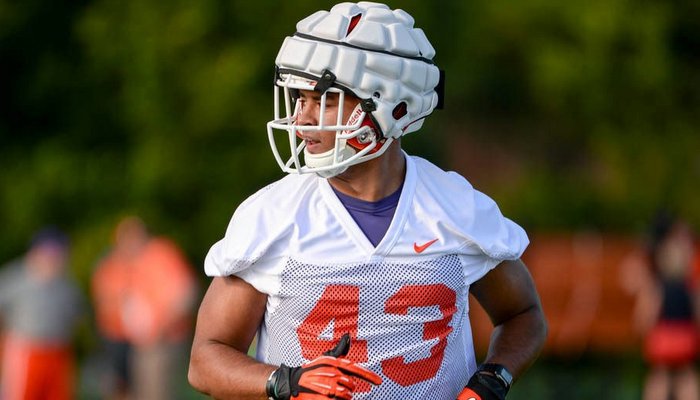 Korie Rogers is "always in a bad humor" according to Swinney

CLEMSON – Bowl practices are usually a time for the players who received a redshirt to get the kind of reps with the coaches with their position coaches that they don’t get during the season, and head coach Dabo Swinney

With that in mind, we asked Swinney his thoughts on the redshirts. We ran the offense last night, so now it’s time to take a look at the defense.

“All of those guys have bright futures if they stay healthy. I'm really proud of how they worked in the power hour group. I just literally went through that today and all of those guys jump out as far as their improvement in all of their numbers. Kendall Joseph is just explosive. He has explosive strength. He's a thumper. Register is a guy that looks totally different right now than he did when he got here. Mentally looks different as well. Korie Rogers is an athlete and arrives in a bad humor every time he goes to hit somebody. Those guys have the right makeup for the linebacker position. Brent did a great job evaluating those guys and getting the right pieces in here. I'm really excited about them and then Jalen Williams

Jalen Williams
Fr. Linebacker
# 6-0, 215
Blythewood, SC
View Full Profile will join us in January. He's another one that has the kind of motor that we like.”

“He is as physical a guy as we have on the roster right now. If you just want to talk about a guy that likes contact, he loves it. He's a big hit all of the time just waiting to happen. Whether it's over there going against the offense or during scout periods or on special teams or whatever, he's a hitter. He seeks it out. He's got excellent ball skills. He could play wideout. He's got good range. He's a guy that physically needs to develop. He did a great job in the power hour. I'm real pleased with that whole group as far as how they've worked. Some guys take advantage of it and some don't, but Jefferie has really been engaged and had a great attitude all through the process. I like his personality and I think he'll be a good leader for us as he goes through his career here.”

“We've got him right there where Vic has been playing for us. He had a little tonsil issue the other day, so today was the first day he really got back going. He's a guy that's got excellent potential. He's a very conscientious young man in everything he does - on the field, off the field he is driven to be successful and he will be.”

“High motor. Big body. Banger. Kind of plays violent inside. He still plays a little too high but Dan [Brooks] will get him coached out of that. He's another one that we're real excited about. He jumped on the radar right in fall camp - quickly, we recognized him. Fast twitch. Has that big body and that big frame and the athleticism that's hard to find. We're looking forward to pushing him this spring. He'll be a guy that's going to have to help us.”

“Both of those guys have worked like linebackers in that weight room, which is what I like. I like to see specialists that get in there and grind. That's what [Chandler] Catanzaro did which is why he was so respected by his teammates. He grinded in that weight room - changed his body. Alex Spence came in here at 183 and he's 199 right now. He's done that since the summer. That doesn't just happen. You have to be putting the work in. That's what he really needed - to improve his strength - and I've seen the results out on the practice field. He's going to be a good one.”