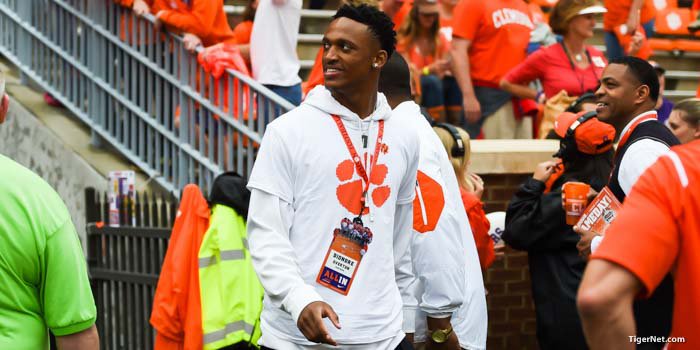 Clemson hosted its biggest recruiting weekend of the season Saturday, welcoming over 50 prospects to Death Valley to witness its division-clinching win over Florida State.

With a No. 1 ranking and an undefeated season, Clemson is gaining the attention of recruits from around the country, but it wasn’t just the 23-13 win over the Seminoles that caught the attention of those in attendance. It was the way the Tigers fought back after the early Dalvin Cook score and the early offensive struggles.

2016 Spartanburg (SC) running back commit Tavien Feaster might have summed up the night the best.

“It was a great win. FSU came out and hit them in the mouth, but Clemson fought back the whole game and they came out on top,” Feaster said

"Man, it was crazy. The atmosphere was insane. It felt like the stadium was rocking."

“It was unbelievable. Every time I visit I get a great feel for the university and the game day atmosphere. It was incredible and gave me chills. They definitely deserve the ranking they have by they way they’re playing.” "That was a very good win for the program considering being ranked number, and they showed why they deserve that number one spot."

"I thought the defense played great the whole game except for the 1st drive and once the offense started going I thought they played well. And I think it's awesome that Clemson is #1 because I think they really deserve it and because I have an offer from the #1 team in the country."

"It was a great experience. I like that they play tall, physical DB's like myself and they are very well coached."

"It was amazing. I loved the fans, and the game day atmosphere! And it was just a great game."

"I have literally fallen in love with Clemson - just the fans, the coaching staff and the players. As soon as I walked into the stadium, I hear fans telling me, 'Hey X, that hill is waiting for you.' I just love Clemson. this school will not leave my No. 1 on my top schools. Not just because of the

football team and that they're undefeated, but because they are building a heck of a program. There are not any more words I can use to describe it. I have literally fallen in love with Clemson. It was straight out guts. Just like Coach Swinney said that's championship football at its best. They did not let the ranking distract them. They just went out and played their hearts out and that's what it's all about."

“The game was great. The atmosphere was hype and the team really played well in the second half to come back and win.”

“That was a big win last night, I was there. It was a great game. That #1 ranking is awesome too, but it means nothing if they don't finish now! Which I think they will.” 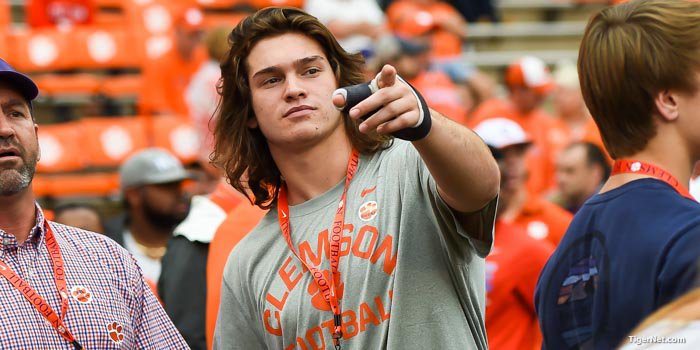 “HUGE WIN! I thought the offense came out slow but bounced back in the second half. I also thought the defense played great, too. Clemson is on track, but they’ve got to move on to next week though.”

“I knew they were going to win. I had no doubt. They proved why they are number one.”

“We're number one for a reason! And every week they prove why! I can't wait to join them next year.”

“The crowd was amazing! The fans are so passionate! You can tell they were really into the game!”

“It was exciting to see them get that victory since I know how hard they have been working and how bad they wanted that win!!!”

“Clemson struggled at the beginning but they never quit. They fought through adversity and in the end they pulled out the win.”

“It was great! My dad played at Clemson in the 80's and my mom went to Clemson as well so I've grown up loving Clemson, but I've never seen anything like yesterday at Clemson before. The valley was rocking! After the game in the locker room was probably my favorite part because I got to see what it was really like in there after such a big win. It was an overall great experience and my best unofficial visit yet!”

"It was great. I had a great time. It felt like the stadium was rocking"

To run down that hill has always been a dream.. #ALLIN

Clemson is so hype

After Having an Amazing Time In Death Valley ???? with My Family, Mom, Dad, & Sister for the first time @ a game, Now I have a serious Top 3!

Enjoyed the game with dad ?? pic.twitter.com/jUUVtdx7TK

Them Clemson boys so lit ??

I am literally in love with clemson. The fans, coaches, players, everything just perfect. Clemson is not leaving #1 on my list . #ALLIN

Atmosphere was awesome on my recruiting visit to Clemson # first class pic.twitter.com/GJeoui2SCv

I see why they call it Death Valley lol couldn't hear nothing . ??

Shoutout to clemson for the great visit

Had a great time On my way home now

Me and the head man himself Coach Dabo Swinney?? pic.twitter.com/ZJ0On2h0pl