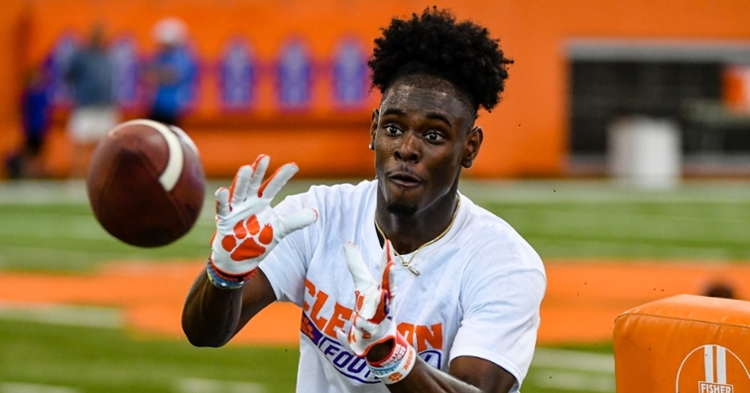 Greene concentrates on a catch this afternoon.

Two down, two to go.

An action-packed afternoon concluded the Thursday sessions of head coach Dabo Swinney’s high school camps, and there is plenty of info to pass along. There are two sessions remaining on Friday.

*As I was walking in, I saw defensive coordinator Brent Venables riding in a golf cart with 2023 4-star linebacker Tausili Akana out of Kakuku (HI). Akana, on a visit with his parents, played in Utah last season after Hawaii canceled their high school season. At 6-4, 225-pounds, Akana is noticeable. As you can imagine, the Pac-12 schools have all offered, along with Ohio State, Texas, and Texas A&M.

He has a huge wingspan, and as an outside linebacker, he has pretty good hands.

*Also working with the linebackers was 2024 athlete Sammy Brown out of Commerce (GA). Brown is listed as running back by some services but plays both ways at Commerce, where his dad was the head coach until recently. Georgia, Georgia Tech, South Carolina, and Tennessee have offered. Clemson staffer Mike Dooley played at Furman with Michael Brown – the father.

Brown can flip his hips and turn on a dime, what you would expect from someone who also plays running back – and showed good hands while working with the coaches.

*Tight ends coach Tony Elliott is always coaching, and a frequent target is current tight end Jaelyn Lay, who has been working with the tight ends this week. Elliott caught Lay talking to someone while they were trying to put out equipment, and Elliott told Lay, "Talk on your own time. This is my time."

Swinney has also ramped up the intensity this afternoon. He simply takes over some drills and coaches everyone from 5-stars to no-stars. As one Clemson staffer has said, the Tigers don't do combines, they simply want the prospects to be better football players when they leave.

*Four-star wide receiver Andre Greene, Jr., worked out his afternoon. The 2022 prospect out of Richmond (VA) St. Christopher’s School has been on campus since last night with his parents, and by all accounts, the visit has gone extremely well. 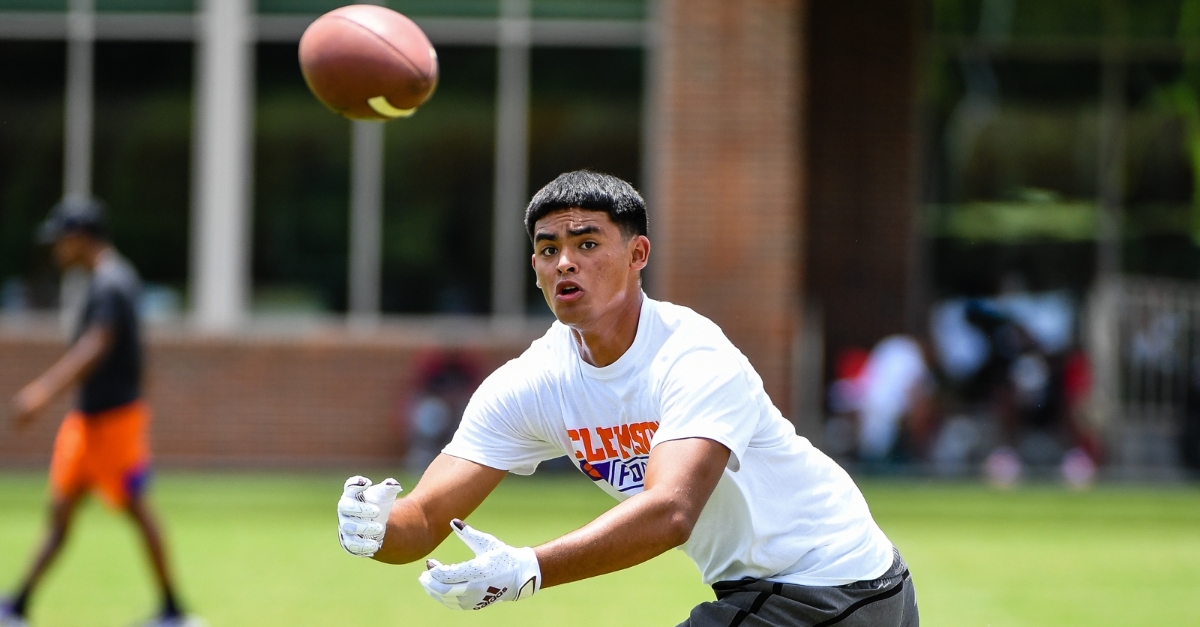 Akana hails from Hawaii and drew interest from Venables.

Another wide receiver who was impressive was Chris Lawson, Jr., out of Cornelius (NC). The 2024 prospect has offers from NC State and South Carolina and is on the camp circuit with his parents. He was offered the chance to play at IMG Academy this season but turned that down in order to stay home. Smooth is the best word I can use to describe his route-running.

I also like to include the under-the-radar guys, and that would be Cole Speer, a wide receiver out of Calhoun (GA). He’s good friends with another Calhoun product – Clemson receiver Brannon Spector – and the two work out together. He ran a 4.38 at the App St. camp last week and later ran a 4.4 at the NC State camp. COVID hurt the chances of a lot of guys to get offers, and his mom said one coach told her he only has one wide receiver spot open because so many players returned for another season.