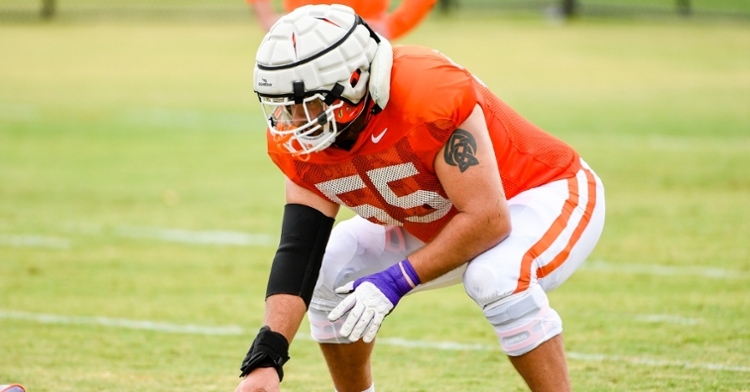 CLEMSON – Redshirt sophomore Tigers center Hunter Rayburn made his first career start Saturday against Boston College, and it didn’t take him long to set personal bests in snaps in a season and in a game. Not bad for a “putty” guy.

Rayburn played 68 snaps in helping power Clemson to 231 rushing yards and 207 passing yards vs. Boston College. The 68 snaps were a career-high, and those snaps enabled him to reach 100 snaps this season, powering past his previous season-high of 57 snaps.

Rayburn has moved around on the offensive line during his career, playing all three positions as the coaches have tried to find the best spot for his talents while also searching for the right combination of five starters. That movement led head coach Dabo Swinney to call Rayburn a “putty” guy.

Rayburn hasn’t always been a fan of being the putty guy and would love to find a permanent home at center.

"Yeah, it's tough. I think I'm more naturally a center, for sure, but it was kind of out of necessity my sophomore year that I had to learn guard and tackle,” Rayburn said earlier this week. "Being my third year here, I know enough to fill in and be functional at each of those positions. At practice, it's basically every couple of periods switching to something different unless the coaches want me to practice one thing specifically."

How did he feel like he performed in the win over the Eagles?

The Tigers were able to do move the ball on the ground better than they have all season, and Rayburn said everyone was on the same page this time.

He agreed with the assessment of the coaches that the play in practice hasn’t necessarily translated into gameplay.

"It's extremely frustrating because we have great practices all week and then just for whatever reason wouldn't carry over," Rayburn said. "But I think we're all kind of growing up, getting on the same page and it's starting to carry over. Obviously, we didn't score as many points as we wanted to and left a lot on the table on Saturday, but the offense performed better, in my opinion."

And, if teams take away the pass, the Tigers have to be able to run the football.

No one knows what the line combination will be when the Tigers take on Syracuse in nine days – right guard Will Putnam is expected to return from a toe injury – but Rayburn doesn’t care. He’s ready to be the putty guy.