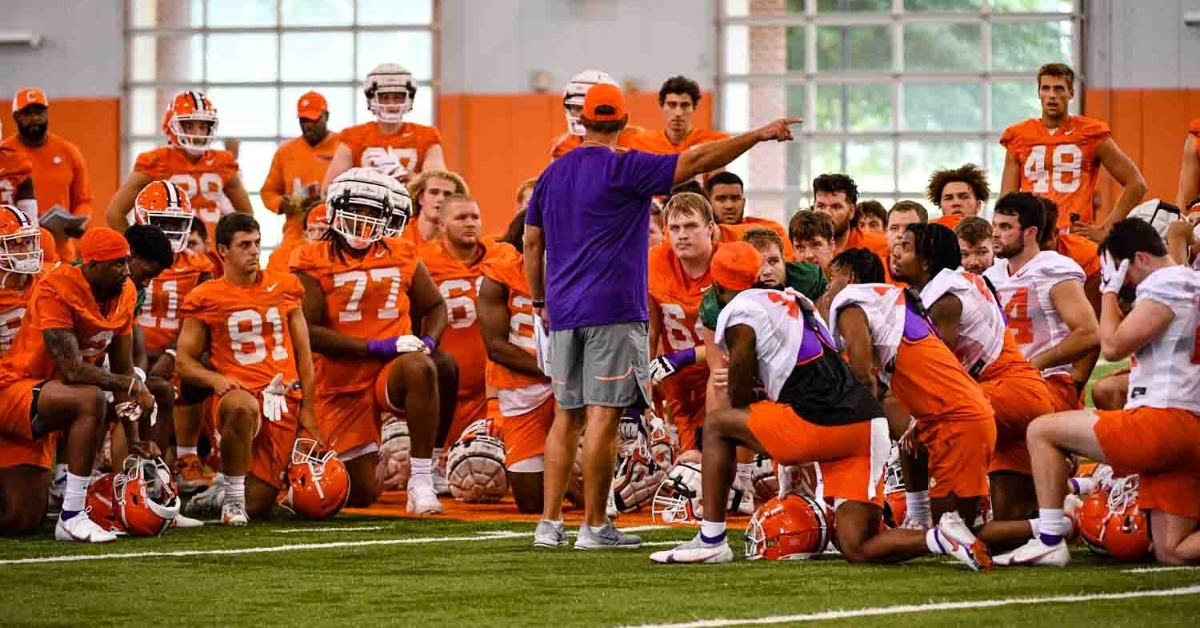 Dabo Swinney talks to the team before Friday's practice.

CLEMSON – Clemson’s fall camp is now in full swing, and with head coach Dabo Swinney graciously allowing the media unprecedented access to practice, there is a lot to report.

We will be back out there later this afternoon for more observations, but we have more to share from Friday’s session. Let’s dive right in.

*We mentioned in Friday’s report that freshman linebacker Barrett Carter flashed at times and his recovery speed is as advertised. Carter, noticeable in his No. 0 jersey, made a one-handed grab of a Hunter Helms pass for an interception that drew the attention of the coaches. He played a few different linebacker spots, so it will be interesting to see where he calls home this season.

*Swinney now has a wireless mic that allows him to communicate with everyone (across both fields and the indoor) at any time, and he took advantage of that Friday. Swinney made sure that everyone knew there was to be no contact during drills and threatened anyone who made contact with expulsion from practice.

*Early on in the skeleton sessions the defensive backs were asked to don boxing gloves to lessen the amount of clutching and grabbing on the receivers. We’ve seen it before, but it’s still odd to see football players wearing the gloves while trying to cover the receivers. Mario Goodrich and Sheridan Jones each made nice plays on the ball despite the gloves, and Andrew Booth showed his athleticism on one sideline pass that he dove and knocked away. 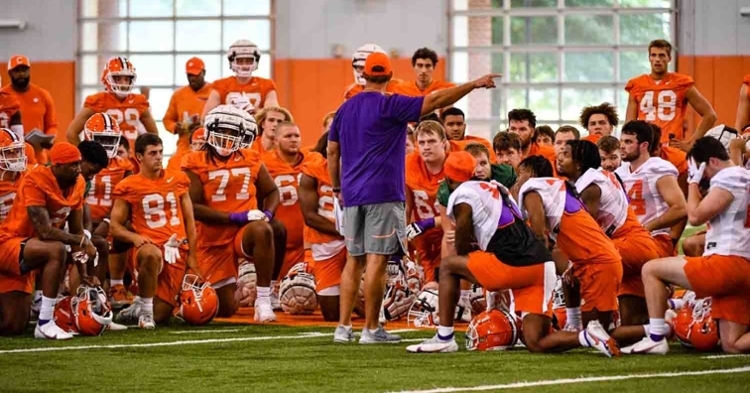 Dabo Swinney talks to the team before Friday's practice."

It was interesting, at least to this observer, that safety Andrew Mukuba drew a few reps at cornerback.

*Working at second-team safety – behind starters Nolan Turner and Lannden Zanders – were Tyler Venables and Mukuba.

*Payton Page and Etinosa Rueben were in green (non-contact) jerseys, while DeMonte Capehart was out with what looked like a knee injury.

*It’s easy for sophomore defensive tackle Tre Williams to get lost in the shuffle with so many great players, but I thought he was one of the standouts in drills I watched. He has made the necessary changes to his body and looks explosive.

*Defensive end Justin Foster wasn’t wearing a jersey when the team stretched, then did very light duty during the practice. Foster is returning from a year off after issues with COVID, and the guess here is that he has to undergo a period of acclimatization before being turned loose.

*With Justyn Ross still out (COVID protocol), the starters at wide receiver were EJ Williams in the slot, Frank Ladson at field receiver, and Joseph Ngata at the boundary. Troy Stellato was second-team in the slot, while Ajou Ajou played the boundary and Beaux Collins played to the field side. Stellato caught a beautiful deep ball over the head of Nolan Turner.

*As I mentioned, we are back out there this afternoon, so there will be more observations (we will have three covering the practice) this evening, with more coming Sunday. Stay tuned.