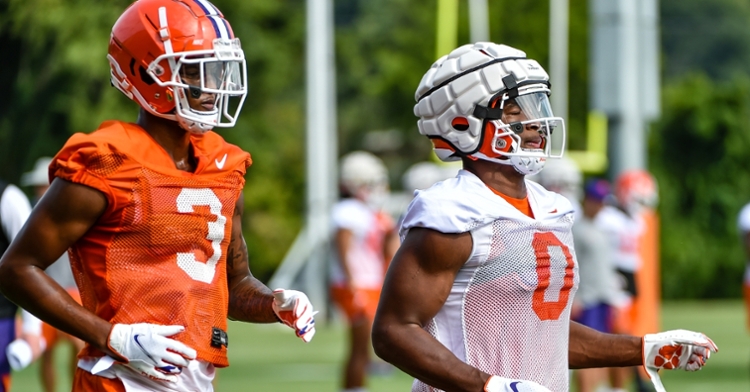 CLEMSON – Tuesday marked the fourth practice of August camp, a practice that ended just as the weather sirens activated and a huge storm rolled over the campus and football facility.

Clemson offensive coordinator Tony Elliott and defensive coordinator Brent Venables were made available to the media, and we have some assorted news and notes to pass along, including the fact that Elliott thinks Ajou Ajou is a bigger version of Nuk Hopkins.

However, we will start with Venables.

*Freshman linebacker Barrett Carter is working at both the Mike (middle) and SAM (strongside) linebacker spots. Venables said that Carter hasn’t taken any reps at safety but thinks he could play there.

*Andrew Mukuba and Malcolm Greene have played corner and safety and done well. Tyler Venables is playing both safety and nickel. Venables said he is super pleased with Mukuba and how he’s playing and where he is mentally.

*Venables agreed with Bryan Bresee about Justin Mascoll being a standout and he expects a big year for him. He said Mascoll plays hard and gets the best out of teammates.

* Venables said the DBs have been disruptive when it comes to swatting balls and picks…although early, he’s seeing the right hunger and mentality to the defense overall.

*James Skalski and Baylon Spector are “ballers” as leaders, players and athletes. “Those guys are really great athletes, but they’re great players and great leaders. Been a backbone for us for a few years now.”

*Mascoll is a great example of development. Explosive, physical, always ready for his opportunity.

*Said it was an emotional moment meeting baseball great Darryl Strawberry. He said growing up in El Cajon, California, everybody knew about Darry Strawberry and that Strawberry was his idol. He said it was great hear the message and he appreciates the transparency and what the Lord has done in his life.

*Elliott says freshman running back Will Shipley always goes to the front of the line, even though he may not know what he’s doing. Says Shipley is an exceptional young man and has bought into the PAW Journey. He wants to be a leader and wants to be great.

*Elliott said he likes what he sees out of the offensive line but can’t wait to see them hit somebody. Likes what he’s seen out of Dietrick Pennington. He said the staff wants to pull center Hunter Rayburn “through the knothole.” He said that is the guy they are really stressing and straining, because he’s 320 pounds and adds “girth” to the line, something they missed last season.

He is anxious to get to Saturday and see them in the scrimmage. He reiterated that they want to play the best five, which means they are bringing Marcus Tate along.

*He said that while Taisun Phommachanh looks great, they still don’t know when he will be available to play but are hopeful it will be this season. Elliott said they are excited about the progress. He said he is encouraged where Phommachanh is mentally.

*Called quarterback Will Taylor “lightning in a bottle” and he has been encouraged with what he’s seen.

*Elliott said while everyone is talking about Shipley, “don’t sleep on Kobe Pace.” Said he is tough and physical and strong and catches the ball well.

*Elliott said Barrett Carter is one defensive player that has caught his eye.

*He said he is pushing Davis Allen and Braden Galloway and that either one of them can run out there first. He also said he’s encouraging them to bring their teammates along with them.

*Loves what he’s seen out of freshman Tristan Leigh. Said every time he sees Leigh, he’s in the playbook and learning. Still has some work to do with his body but the future is bright. Says that Pennington and Tate are physically ahead of Leigh.

*Elliott said that Ajou Ajou “has put in the work and you can tell his confidence is there. He is not perfect and we don’t expect him to be. He is pushing Joe (Ngata). You are seeing us getting back to what we were in the past with that 1-2 punch at the 9-man. It has been fun to watch his evolution. We have to cut that diamond in the rough and cut it so that when the lights are on, it shines.”

He then said that Ajou reminds him of Nuk Hopkins.

“His movements remind me of Nuk,” Elliott said. “But he’s bigger. Might be a little bit faster. He is not there yet from the mental aspect. When you threw it in Nuk’s zipcode, he caught it. I think Ajou has that potential, too. He just has to develop that mindset. But moves similar to Nuk.”

Elliott said Ajou is trending in the right direction.