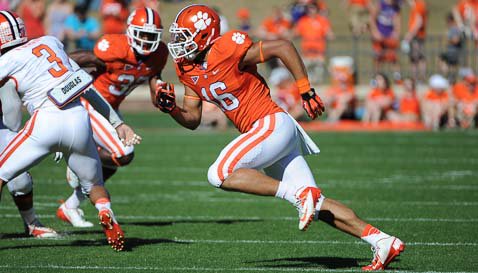 Position battles at quarterback and running back will be closely watched this spring, but one of the more hotly-contested battles just might be at tight end.

Brandon Ford
Tight End (2008 - 2012)
#80 6-4, 240
Wando, SC
View Full Profile led a resurgence at the tight end spot at Clemson, breaking records and setting a standard for those that play the position. Allen set a Clemson record with 50 receptions for 598 yards and eight touchdowns in 2011, before declaring for the NFL Draft as a junior. Ford followed that up with a 40-reception campaign during his senior year in 2012.

The 2013 season was less about one player and more about a committee approach, as five different players combined for 45 receptions. In 2014, the Tigers lose the leadership and blocking ability of Darrell Smith

Let’s take a look at each of the players vying for playing time at that spot.

Seckinger started 10 games and led all tight ends with 21 receptions for 244 yards and four scores. He had the game-winning catch against Georgia and in the Orange Bowl against Ohio State, but also had a couple of critical fumbles. He possesses the size to be a matchup nightmare, but has to be a more consistent blocker in order to stay on the field.

Leggett was second on the team with 12 receptions for 176 yards, but also had the two longest receptions (43 and 44 yards) out of the tight end group. He has the size and speed to be a star, but admitted to the media late in the season that he has a lazy streak and doesn’t give his all in practice. That lazy streak kept him from earning more playing time; however, a 44-yard scoring reception from Cole Stoudt

Cole Stoudt
Jr. Quarterback
#18 6-4, 205
Dublin, OH
View Full Profile against The Citadel and a 43-yard reception on a wheel-route in the Orange Bowl show his potential.

Cooper is the old man of the group – a fifth year senior – who has logged over 700 snaps during his Clemson career. He had a career-high 10 receptions for 93 yards in 2012, but missed the first part of last season while recovering from a torn ACL suffered in the spring. At 6-6 and 250 pounds, Cooper is more of a blocking threat than a receiving threat. His blocking ability was on display in the Orange Bowl – he had several big blocks that helped Sammy Watkins

Sammy Watkins
Jr. Wide Receiver
#2 6-1, 205
Fort Myers, FL
View Full Profile have a career night. It will be interesting to see how Morris plans to use him this spring, now that he is fully recovered from the ACL injury.

McCullough played in nine games and four receptions for 17 yards. He was moved to running back late in the season as the coaches tried to build depth at that position after late-season injuries to Zac Brooks

Dabo Swinney
Head Coach
View Full Profile seemed to indicate during his season wrap-up press conference that McCullough would stay at running back for the foreseeable future as he provides valuable depth at that position.

Greenlee came to Clemson as a linebacker prospect, but during fall camp the coaches moved him to tight end. When we talked to Coach Morris late in the season he said that he was excited about Greenlee’s potential at the tight end position and thinks that he has a chance to make an impact this season.

Riggs is the son of former All-ACC tight end Jim Riggs who played at Clemson in the mid-1980s and spent seven seasons in the NFL. The 6-4, 240-pound tight end caught 34 passes for 610 yards and four touchdowns as a senior at J.L. Mann high school. Riggs red-shirted in 2013 and with his size Riggs could grow into an offensive lineman.

The four-star tight end out of Savannah (GA) Calvary Day School is the nephew of Georgia great Hershel Walker. Richard is a threat in the passing game and spent much of his senior season out wide at the receiver position. The 6-2, 232 pound prospect has very good speed for his size and sure hands. As a senior, Richard had 29 catches for 502 yards and five touchdowns.

Smith was highly-touted prospect out of Columbia (SC) Hammond School who garnered attention from schools like Alabama, but his family’s legacy at Clemson was too much to pass up. Smith is 6-5 and 235 pounds and just like Richard, he has the size and is a reliable receiving threat.