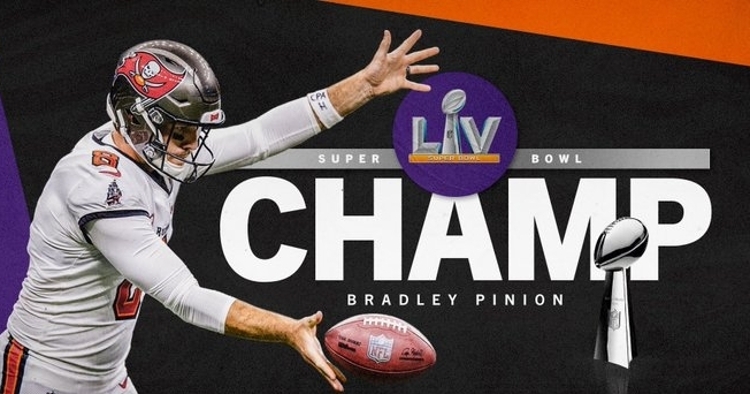 Pinion won a ring with the Buccaneers.

The ball just sounded different coming off his foot, and the sound caused me to turn around. Now, a decade later, the cause of that sound has a Super Bowl ring.

Bradley Pinion won a Super Bowl ring with the Tampa Bay Buccaneers Sunday night, the second Clemson punter and third Clemson player in a row to win a title. As I watched him celebrate with his teammates, it took me back to a hot morning back in 2011 when Pinion showed up at head coach Dabo Swinney’s high school camp so he could get a look and maybe, just maybe, an offer.

I was walking in from the parking lot and Pinion was on one of the outer fields warming up – you have to remember that this was before the indoor practice facility. I bypassed the kickers but heard the “whump” of a kick and immediately turned around. It was different than any other high school players I had heard. I grabbed my notebook and started to write a note to myself when a voice over my shoulder said, “That’s my son, Bradley Pinion. Who are you?”

That was the day I met his mother, Lori, who filled me in on all the details in the punting recruiting world and introduced me to Bradley. She also told me that her son was considered one of the top punters in the region, along with a kid named Cason Beatty and the two were out kicking in camps and looking for offers. Beatty wound up punting at FSU, Clemson offered Pinion and he committed and we’ve been friends since that day.

It’s great to see former players win a championship, but it’s even better to see someone that you consider a friend and an overall good human being, and their family, be able to celebrate. Who knew on that hot morning so long ago what the future would hold, but the sound of the ball off his foot gave a pretty telltale sign that he was going to do big things.

*The Super Bowl was also a sign of just how important an offensive line can be. Patrick Mahomes ran for his life all night and took shots he shouldn’t have taken while throwing up hopes instead of his usual precision lasers. Somewhere, I am sure Deshaun Watson was looking on and thinking to himself, “Now you see what I have to deal with.”

Watson has come under criticism from old-school NFL types who think he should just be quiet and accept what management in Houston does for the team. Sure, that was the way 40 years ago, or longer, before free agency and players understanding that they should have at least a say in how the team is put together. Gone are the days when former White Sox owner Charlie Comiskey sat his players so he wouldn’t have to pay them playing bonuses.

Watson has been a great teammate and leader for the Houston franchise, and he kept his mouth closed when some moron handed Bill O’Brien the head coaching job and then the job as GM. Watson remained mum when O’Brien turned sure victories into defeats, and even came out and supported his coach when the media and fans turned on him. Watson didn’t say much when O’Brien traded away Nuk Hopkins for a box of Band-Aids and a two-dollar bill and continued to support his coach when the calls for his head grew even more fervent.

Watson then spent most of the season running for his football life and dealing with a mid-season coaching change that everyone but the Houston brass knew was inevitable, and when the season ended, a bruised-and-battered Watson simply wanted to have some input on future decisions because it was obvious no one in the front office knows what they’re doing.

Once he saw the future – that things won’t change and his hopes of a Super Bowl in the near future grew dimmer – he spoke up and said he wanted out and a chance to win now. And he’s the bad guy.

Trust me, he’s the good guy and I hope they listen to him (my Denver Broncos would be a good landing spot). And I hope he gets to experience what Pinion experienced Sunday night.

*Don’t forget that softball starts this week, with the Tigers opening the season Friday at the River City Leadoff tournament in Jacksonville, Florida on Friday, Feb. 12 against Illinois State at noon. Baseball starts in 11 days with a home series against Cincinnati, and football spring practice starts on February 24th. With basketball looking like it’s turned the corner and poised to make a run to the NCAA Tournament, we are about to hit a busy stretch of the year.