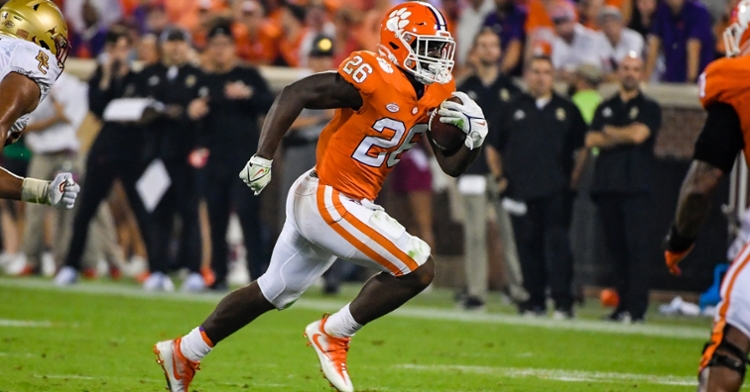 Mafah looks for running room against the Eagles.

CLEMSON – Phil Mafah walked into last Monday’s interview session and had to deal with a smaller than usual media contingent, a cacophony of noise as torrential rain beat down on the roof of the indoor practice facility, and his first look into the TV cameras during his Clemson tenure. Much like he handled his first game action Saturday, he handled it with aplomb and a smile.

Mafah went from redshirt candidate to breakout candidate in one afternoon, carrying the ball eight times for 58 yards in his collegiate debut. That included a second-quarter burst that gained 28 yards, sending the Death Valley crowd to its feet.

The Loganville (GA) Grayson product was having too much fun to notice the crowd.

"I'd say it was pretty crazy," Mafah said. "But you know when you get locked into the game, the outside noise you're not really distracted by that. You just really focused on winning."

Mafah broke his ankle last November and missed the state playoffs and the final few games of his high school career, but arrived at Clemson feeling healthy enough to compete for a spot on the depth chart.

“(Competing) was definitely my mindset during fall camp," Mafah said. "Just do the best I can and try to compete. I just talked to some of the other players and they told me it's (redshirt) not bad. So I embraced that. Then really everything that kept me like consoled is really just praying and just trusting that God's timing when I need to play, I'll play."

Will Shipley, Kobe Pace, and Lyn-J Dixon shared some of the early-season reps, but Dixon transferred out of the program and Shipley went down with a leg injury late in the loss to NC State. Head coach Dabo Swinney and offensive coordinator Tony Elliott hinted that Pace would start but that veterans Mikey Dukes and Darien Rencher would help shoulder the load while they tried to work Mafah into the rotation.

Instead, Mafah was the second running back off the bench.

"When Will got hurt that wasn't a good event for me," Mafah said. "But I just knew if that happened, like I would probably have to step up. So, you know, just that Monday after the North Carolina State game, he just came up to me just said to be ready."

Clemson travels to New York to take on Syracuse next Friday night and Mafah now knows he can help his team come away with the win.

"It gives me confidence, knowing that I can contribute to the team," Mafah said. "But you know, I'm always just trying to stay humble and just do what I can this year to help the team the best way I can. But definitely makes me confident, you know, knowing that the work I put in, was able to be shown a bit on Saturday."