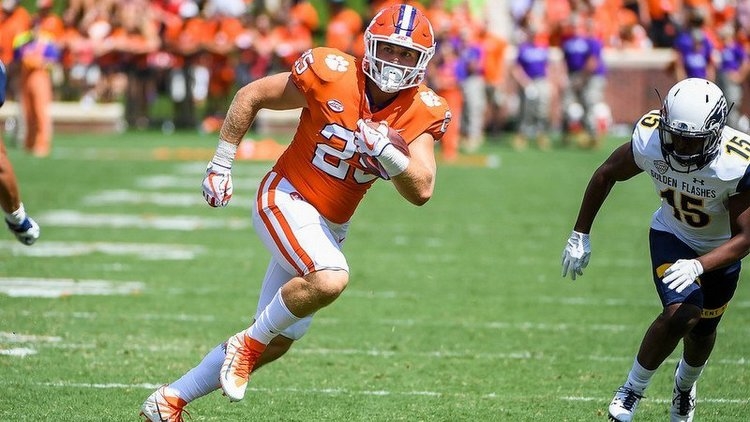 Clemson has been known for its depth at tight end, but after several key departures and the possible suspension of Braden Galloway, Danny Pearman will have arguably his toughest test in quite some time.

Milan Richard and Cannon Smith’s time at Clemson has come to an end, Garrett Williams is still trying to decide about forgoing his senior year and joining the Navy, and Braden Galloway could be facing a one-year suspension by the NCAA as part of the ostarine case.

That leaves J.C. Chalk as the lone scholarship tight end with any game experience heading into the spring. The rising junior has logged four catches for 40 yards in 151 snaps over 24 games, but he will be counted on more than ever in 2019.

In addition to Chalk and Galloway, Clemson brings in Jaelyn Lay – a top-five tight end in the 2019 class according to ESPN and Rivals. He was the No. 165 player and 16th best player in the state of Georgia. At 6-6, he is the tallest tight end in Clemson history.

“Jaelyn had a good camp with us. He did a good job. He'll join us in January,” he said. “It will be a big opportunity for him to jump in there. The thing you don't know is when you put the pads on, what can he do? He has the skillset to really help. How much can he retain of the offense? How can he handle it it physically? The only thing we need there is time to see whether he can do it.”

Clemson also has walk-ons Cole Renfrow (two snaps against Louisville in 2018 after suffering a torn ACL in 2017) – the younger brother of Hunter – and J.L. Banks a transfer from Georgia Southern who played 49 snaps in 10 games for the Eagles in 2015.