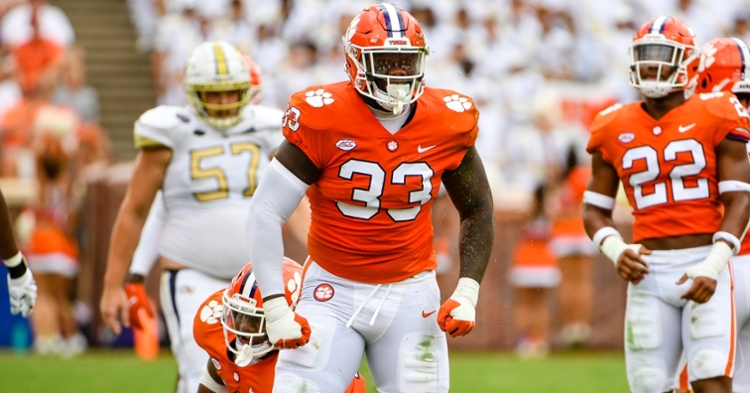 Orhorhoro is expected to make a second start this week against BC.

Ruke Orhorhoro walked into the Clemson indoor practice field to meet with reporters for his media availability on Monday morning wearing a shirt with one word on the front: believe. The word, with letters in Clemson purple and outlined in orange, can serve as a reminder to fans that this season is not over yet.

While the Tigers sit at 2-2 and 1-1 in ACC play now, as Orhorhoro said on Monday, there’s a lot more football left to be played.

“It’s only week five, there’s so much left to be played,” said Orhorhoro when asked about still being able to accomplish all the team goals. “We’re more of an inside-out type of team, not an outside-in. We know what we have to do to get better, and we know what it’s going to take. I’ve been there, done it and seen it. I’ve been a part of a couple really good teams and I know the atmosphere and what it takes. I think this team is really special and this is just a couple road bumps, and we’re going to keep driving over them.”

During fall camp, Orhorhoro gave the media an inside look into one of his best characteristics, his lightheartedness. The Nigerian native said he loves to keep a smile on his teammates' and coaches' faces, something that is coming in even handier the last few weeks.

“People tend to get down on themselves, that’s just human nature,” Orhorhoro said. “Still seeing the smiles on the young guys' faces and them realizing they have to step up now, it’s nice to see. Seeing all the guys still smiling and keeping their composure and not letting the outside noise get us down, that’s really good to see and that’s going to help this team a lot.”

When asked about the expectations coming into this season, Orhorhoro said the Tigers need to keep pushing and find a way to win the next game.

Orhorhoro, who is starting on the defensive line now for the injured Tyler Davis (torn biceps), said it’s hard to see his teammates go down with injuries but the young guys have to step up now.

“It’s really tough to see,” Orhorhoro said. “Especially my guy Bryan (Bresee), out for the season (with a torn ACL). I’m keeping him and his family in my prayers, knowing how hard he worked this offseason, it’s just tough to see. When it comes to starting, that’s what they recruited me here to do, they recruited me here to play. I just have to go out there and play and do me.”

Some of Orhorhoro's best friends on the team are on the offensive side of the ball. While hanging out with guys like Frank Ladson Jr. and Taisun Phommachanh, they remain optimistic and look forward to getting back to playing the kind of offense they know they can play.

“I feel like they’re doing good,” Orhorhoro said. “I hang out with Joe (Ngata) and Frank (Ladson Jr.) and Taisun (Phommachanh) and I see their character and composure. It’s just little mistakes we have to fix. They’re very optimistic and they’ll forever be optimistic because we’re Clemson and we know we just have to go out there and do it.”

While Orhorhoro mentioned there’s a lot of football left to be played this season, if the Tigers cannot get the offense going on Saturday against Boston College -- a seventh straight ACC Championship might be out of the picture.