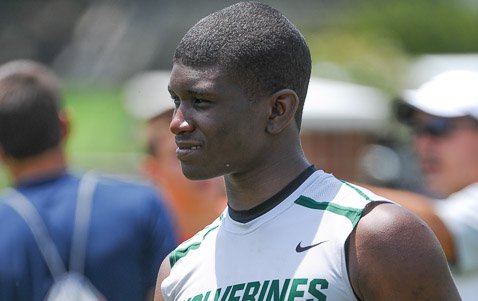 Barnett has Clemson near the top

Gage Cervenka
Defensive Tackle
6-3, 280
Greenwood, SC
View Full Profile out of Greenwood The best guess is that the Clemson coaches will take as many as three or even four more defensive linemen this cycle.

In the second part of this two-part series, TigerNet will take a look at five (in no order) of Clemson’s top targets at defensive end.

View Full Profile , Bamberg-Ehrhardt (SC) Bamberg: Bamberg has always been a pipeline for the Tigers, sending Ricky Sapp, Da’Quan Bowers and Martin Aiken Clemson’s way. The next one up in the pipeline is this 6-4, 218-pound prospect, who TigerNet learned over the weekend will announce his decision next Saturday at a ceremony at his church. Davis has picked up offers from Florida, Kansas St., North Carolina, Tennessee, UCLA and USC. He told TigerNet this weekend that he has a great relationship with defensive ends coach Marion Hobby

Marion Hobby
Assistant Coach / Defensive Ends
View Full Profile , and that he understands the reasons why players like Bowers, Sapp and Aiken have made the trip from Bamberg to Clemson.

View Full Profile , Ridgeville (SC) Woodland: The 6-4, 239-pound defensive end committed to Virginia Tech early in the process, but decided later on that he wanted to look at more options and at the top of that list were the Tigers. Barnett has liked the way the Clemson coaching staff has recruited him, especially when head coach Dabo Swinney

Dabo Swinney
Head Coach
View Full Profile stopped by his school during the winter. Barnett is ranked as the player No. 244 in the ESPN 300, the No. 21 overall defensive end nationally and the sixth-best prospect out of South Carolina.

View Full Profile , Lincolnton (NC): The four-star defensive end can have his choice of just about any school in the country, but when it comes time for him to make a decision, the Tigers will be firmly in the mix. As a junior, the 6-4, 283 pounder had 125 tackles, 10 sacks, 21 tackles for loss and seven passes broken up.

Roseboro hopes to narrow down his list at some point this summer. He is player No. 159 in the ESPN 300.

Byron Cowart, Seffner (FL) Armwood: The No. 2 defensive end in the country and five-star prospect according to ESPN has long been an Oregon lean, but after spending time with Clemson recruiter Tony Elliott

Tony Elliott
Assistant Coach / Running Backs
View Full Profile , Cowart said the Tigers are definitely under consideration. Obviously, Clemson will have some ground to make up, but the 6-3, 254 pounder is giving the Tigers a chance.

View Full Profile , Richmond (VA) St. Christopher: The four-star pass rusher has offers from all across the country, but his relationship with defensive coordinator Brent Venables

Brent Venables
Defensive Coordinator / Linebackers
View Full Profile could give Clemson a chance at landing the 13th best defensive end prospect in the country according to ESPN. One thing that may work in Clemson’s favor is the fact that one of DeBerry’s coaches and mentors attended Clemson.