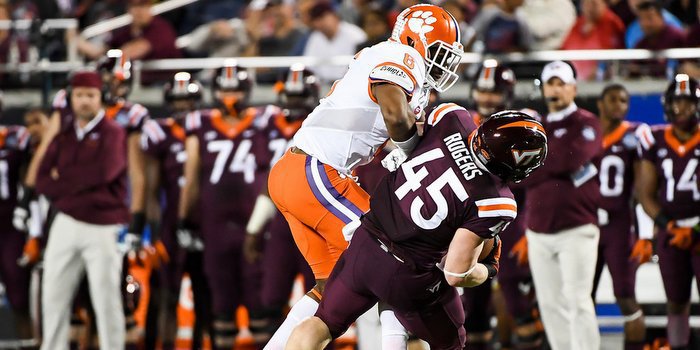 O'Daniel unloads on Sam Rogers, but was ejected for this hit

CLEMSON – No longer feeling like a criminal, Clemson linebacker Dorian O’Daniel is ready to wreak his special brand of havoc on the Ohio St. Buckeyes.

The redshirt junior out of Maryland entered the ACC Championship Game against Virginia Tech on a roll, registering 15 tackles in the previous three games. Clemson’s starting strong outside linebacker, O’Daniel was being counted on to play a big role in stopping the Hokies’ backs and tight ends.

His night ended late in the first quarter, however, after he was called for a targeting foul on Tech running back Sam Rogers. The Tigers led 14-0 at the time, but had to hold on in beating the Hokies 42-35, and it was obvious that O’Daniel was missed.

In his first interview with the media since being ejected, O’Daniel talked about the incident and the upcoming Fiesta Bowl against Ohio St.

“First, it was unfortunate because I felt like I had a great week of preparation leading up to the game. Even on the first two series, I was on everything they were giving me and I was just excited,” O’Daniel said. “It was one of those games that I was genuinely excited to play in. Everything was just going well. I read the play like a book. I knew they loved to get the ball to the backs out of the backfield, so I saw my release and triggered on it. As a defensive player, when you see a hit like that, all bets are off. You have to take your shot. If I could've done anything differently, I probably would've brought my arms up. I feel like if I would've brought my arms, they would've been less likely to call it.

“It was a clean hit; however, our helmets did hit and they did touch, so I do understand why they called targeting. My thing was that it wasn't like it was a small receiver, like a slot. He was a big boy. People will say what they want to say, but I don't think they should've called it, necessarily, but I understand why they did. It was unfortunate that I had to go to the locker room like some kind of criminal and watch it without my teammates. Just being able to watch it inside and getting a different perspective and ultimately being able to celebrate on the field at the end of the game made up for it a little bit.”

O’Daniel was banished to the locker room for the rest of the contest, and he did everything in his power to stay busy.

“I did everything. I went in and showered. Usually, at the end of every game on the bus, we have a meal, so I got my meal and sat down,” he said. “I was chillin' heavy, but I would trade all of that just to be on the sideline coaching up my backup and being with the team supporting them.”

As the Hokies marched up and down the field and later had a chance to either tie or take the lead, O’Daniel learned what it’s like to be a Clemson fan this season.

“I know how normal fans feel whenever they watch Clemson play on TV,” he said. “I was anxious up until the last drive. I was like, 'Now I know how fans feel. Why do we make it this close?' It was a different perspective watching it on tv.

“I knew we were going to pull it out, but now I know how all of those fans felt against N.C. State and all of those other games.”

O’Daniel called it a learning experience, one he hopes isn’t repeated.

“It was definitely a little frustrating. I feel like Jalen Williams did a good job coming in and picking up the slack. I would've obviously loved to have been out there,” he said. “I was more disappointed because I prepared so hard and I felt like I was so locked in on the game plan that it was going to be a really good game for me, but coulda, woulda, shoulda. Just being out there and calling out the plays that I would've done in certain situations. If anything, it's just humbling. I know what's at stake now. I know what I can do differently in situations like that and I just have to try my best not to get ejected.”

Next up is Ohio St., and O’Daniel will once again be counted on to play a pivotal role.

“They're really difficult to prepare for. They're a top-four team just like we're a top-four team, he said. “They didn't get where they are by accident, nor did we. We know they love the run-pass option with J.T. Barrett. He's a physical runner. He loves getting the ball up the middle. No. 4 (Curtis Samuel) is a great player. They love getting him the ball on the edges and they do a good job of blocking on the perimeter. Everyone does their job. Leveraging the ball is going to be important. Run support and gap support, whenever he ducks it back under is going to be critical.”