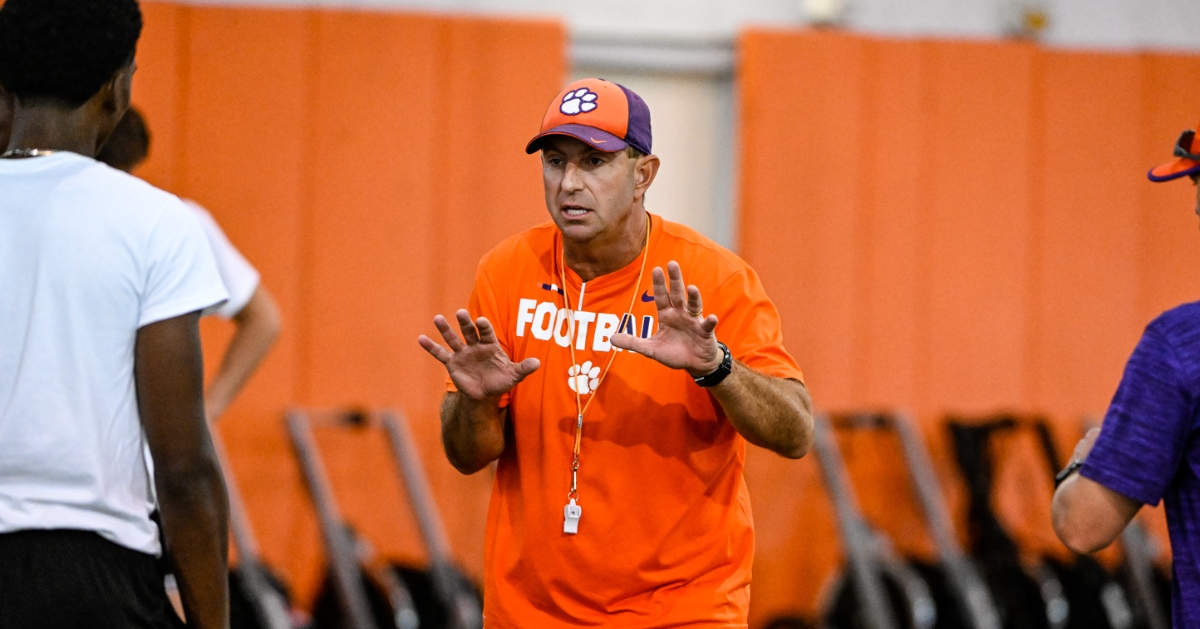 Clemson's recruiting has seen a lot of action around this month's high school camps.

A new baseball coach, commitments coming in almost every day, and a prominent loss in the recruiting department. A lot is going on in Clemson right now at a time of year when it’s supposed to be quiet.

What set the stage for all the drama? Head football coach Dabo Swinney’s high school camps have just ended, Swinney changed course and allowed official visits in June, former baseball coach Monte Lee was fired after the Tigers missed the postseason, and Swinney refuses to back down on his “commitment goes both ways” mantra.

Let’s start with the latter – 4-star wide receiver Nathaniel Joseph didn’t surprise anyone when he announced Tuesday evening that he was de-committing from Clemson. There have been rumors for weeks as Miami and its new head coach, Mario Cristobal, have put on the full-court press. It’s easy to assume that the Canes are promising NIL deals and money, and his high school coach is the famous Luther Campbell, or in the rap world, Uncle Luke. And Uncle Luke has strong ties to Miami.

But in learning more about the situation over the last week or so, it was evident that Joseph wanted to take more visits. Of course, we know that Swinney doesn’t want players who are committed to take visits to other schools – once the Tigers lock in a spot, they stop recruiting at that spot. In other words, the Tigers are committed to the relationship and expect that same commitment in return.

Joseph wanted to visit Louisville this weekend, and now it appears he will get his chance.

In good recruiting news, Clemson landed its seventh commitment of the month Tuesday when Warminster (PA) Archbishop Wood tight end Markus Dixon gave his verbal pledge. Clemson now stands at 10 commitments total in the 2023 class. Five of those latest pledges took officials that first weekend in June, an event that is certainly paying off for the Tigers.

Big-time defensive end Vic Burley of Warner-Robins (GA) announces today, and it looks good for the Tigers there. And there are more to come.

Now, onto baseball. I told everyone early Tuesday afternoon that Athletic Director Graham Neff had centered his search on a new baseball coach in Michigan’s Erik Bakich. Reports started to surface out of Michigan late Tuesday that Bakich has accepted a deal to become the Tigers’ next head coach.

It will be interesting to see who he brings with him as assistant coaches. I was told by a source late Tuesday that it appears, at least for now, that valuable Clemson assistant coach and recruiter Bradley LeCroy will not be retained. There are also reports that Bakich is bringing his top assistant (and recruiter) with him, a guy named Nick Schnabel.

One intriguing name to watch is John Pawlowski. He resigned from Western Kentucky a month ago, and was the pitching coach at Clemson from 1994-98. His staff led the country in ERA in 1996. Of course, Pawlowski also played at Clemson from 1983-85. Pawlowski finished his Tiger career with a 21-12 pitching record and a 3.89 ERA over 54 games. He made 30 career starts, working 240.1 innings with eight complete games, three shutouts and five saves.

I haven’t heard anything that would lead me to believe that Pawlowski would come back, but it is interesting to think about and bears watching over the next few days.