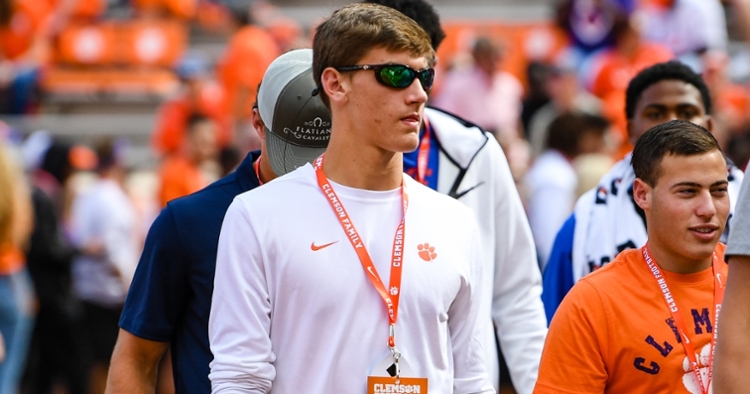 Simpson will make his decision Friday.

Clemson’s top quarterback target for the 2022 recruiting cycle, Ty Simpson, is set to make his collegiate decision next week, and Trevor Lawrence has already been in touch. It was a call that almost didn’t go through because Simpson didn’t recognize the number and thought it might be spam. It wasn’t spam.

Simpson, a 4-star out of Martin (TN) Westview, will be announcing his commitment on Feb. 26 (3 p.m. ET). Simpson appeared on 104.5 The Zone’s 3HL to thoroughly preview his recruitment and said that while he hasn’t made a final decision, he has his reasons for going ahead and pulling the proverbial trigger on his choice.

“So my dad is the head football coach here at the University of Tennessee at Martin. His season got pushed to the spring this year and starts the 21st,” Simpson said. “Family is really big to me. For them to be able to come to see me make my college decision and for us all to be there would be an awesome feeling and an awesome time.

“Alabama, Clemson, Tennessee, Texas A&M, Ole Miss, and Texas are a big part of my recruitment right now just because of the SEC and getting the best out of me and my abilities, the coaching staff, and the relationships. Those are my top schools. I’m just praying to God that I have (six) schools that if I came there, I would have a heck of a time if I went there.”

Simpson said he is looking for a school that will help him hone his talents.

The Tigers have more than one reason why they’ve been able to stay in Simpson’s top group, but a call from a certain future NFL No. 1 overall pick didn’t hurt.

“He (Lawrence) actually called me one time. It was a Georgia number and I thought it was a spam call, but all of a sudden it was ‘Hey Ty, it’s Trevor Lawrence,’ and I was like ‘holy crap, I’m talking to the future No. 1 overall pick.’ It was really cool,” Simpson said. “I asked him ‘Why did he go to Clemson’ and 'Why didn’t you stay in the SEC?’ and ‘How was your walk with Christ there?’ I told him I appreciate what he does from his platform showing kids like my brother, who is a diehard Clemson fan, how a quarterback should act. I just appreciate him and he gave me some good advice. Some things I didn’t realize, so it was cool to talk to him.”

Simpson talked more about his younger brother Graham being a big Clemson fan.

“He was probably six years old and I was probably in sixth grade. I don’t know how it started, but Graham is just a diehard Clemson fan,” Simpson said. “He has a Trevor Lawrence jersey — now don’t let him fool you. He has Tennessee, Ole Miss, Alabama — he’s got a bunch of stuff like that, too. But when it comes to everybody else, he likes some Clemson.”

Simpson then went into detail on the best parts of his game.

“The best part of my game would be my off-platform throws and my escape ability. I’m a baseball guy,” he said. “I thought I would actually play baseball in college instead of football. That was my first love. Growing up I always thought it would be cool to play college baseball at Ole Miss or Mississippi State, where my Dad played. Being able to throw sidearm like (Patrick) Mahomes is really cool. My athletic ability, being able to escape from pressure, I think that’s a big part of quarterbacks evolving right now. Being able to escape and make plays on the run.”

Simpson said he has enjoyed being recruited by the best schools and coaches in the country.

“I really enjoy the process. I want to coach when I’m older, so being able to talk to all of these guys and learn football,” he said. “You know, one day, maybe being able to say, ‘I recruited that dude and I’m going to hire him to be my quarterback coach or offensive coordinator.’ I really enjoy that process and getting to know new people. I’m a very social guy and I’ll talk to a brick wall if I need to, so I’ve enjoyed that part of it.”

Due to inclement weather, and the closing of my school. I will be delaying my commitment announcement until Friday, February 26 @ 2pm/CST at Westview High school.