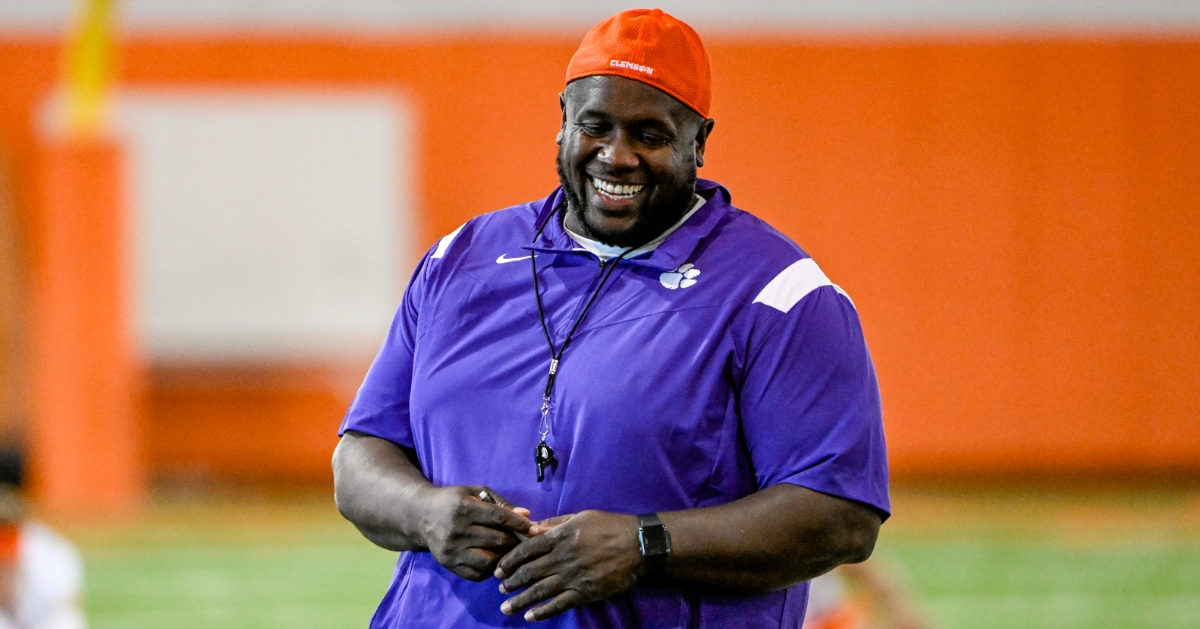 Nick Eason is happy to be back home.

CLEMSON – Nick Eason looked down at his phone and saw that Clemson head coach Dabo Swinney was calling, and it scared him enough that he almost didn’t answer. Now he’s glad he did.

Eason was the defensive line coach for the Cincinnati Bengals in 2019 and 2020 and spent the 2021 season with Auburn. When former defensive tackles coach Todd Bates left Clemson to go with Brent Venables to Oklahoma in early January, Swinney didn’t waste time in calling Eason and offering him the job as the Tigers’ defensive run game coordinator and tackles coach.

For Eason, who was a four-year letterman for the Tigers from 1999-2002, it was a dream come true, even though he almost didn’t answer the phone.

“It has been my dream job. I will give you a little insight into how I got the job,” Eason told the media following Monday’s practice. “I was actually talking to a coach who had the opportunity to become the defensive line coach at his alma mater. But he didn't get the job and he called me looking for some encouragement. So I was talking to him and I told him that sometimes the timing has to be right

“I told him, 'Hey, I've always wanted to coach at Clemson, but they've been winning football games and National Championships and I have a lot of respect for Todd Bates and Lemanski Hall and the entire staff. I love those guys. The timing for me hasn't been right. But maybe the opportunity for me will come down the road.' I looked at the phone and Dabo called me ten minutes later and it scared me. It was out of nowhere. I almost didn't answer the phone. I didn't think he was calling me to offer the job. So to be here is a blessing. I really feel like God ordered my steps for me to be here 20 years later. I am excited and humbled for the experience.”

“We are very talented. I talked to Dabo when we were talking about the opportunity to take this job and he told me, 'Coach, you are going to have the No. 1 defensive line in the country.' So I've seen that so far this spring,” Eason said. “Guys are working really hard and we don't even have (Bryan) Bresee or Tré Williams out there. I am going to be feeling good about myself if I can keep them all healthy. I may be up for the defensive line coach of the year. I have a great group of guys in my room, character guys, and I love 'em like my own sons. They are leaders and I am excited to just have the opportunity to coach them.”

For Eason, the first month will be all about building relationships.

“I may spend the first month or so just getting to know my players. Even though I am a Clemson alumni and these guys have heard my name before, it's important that they get to know me as a person and I get to know them as a person,” he said. “That is where it starts. A foundation has to be built off of that personal relationship with love. I will spend about a month doing that and then I will coach them hard. But if they don't have a level or respect or that personal relationship with you, it can be kind of tough to come in here and lay down the hammer.”