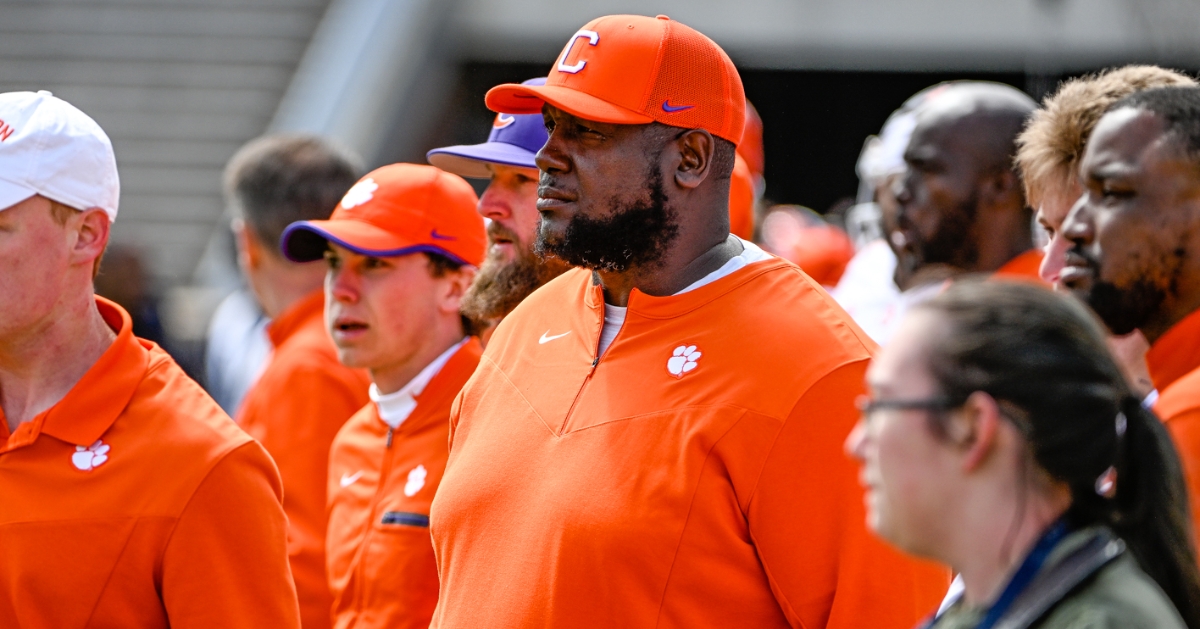 Nick Eason will take his experience in the NFL help his position group.

CLEMSON – Nick Eason is bringing his NFL experience to the college ranks, and he hopes his players learn the value of taking care of their bodies throughout the season.

Eason, Clemson’s defensive tackles coach, spent a combined 17 years in the NFL as a player and coach, and when he arrived at Clemson, he noticed that the Tigers have suffered a multitude of injuries along the defensive line in the past few seasons.

That includes Bryan Bresee and Tré Williams, who each had surgery but are expected to be ready to go for fall camp. Eason has instructed both Bresee and Williams – and his other players – the importance of self-care.

“Bryan and Tré really have done a tremendous job of taking care of their bodies this off-season,” Eason said. “That's going to be a constant thing - they're going to have to continue to work on throughout the year. They will have to learn how to be pros before they become pros. But right now, they have to be the best Clemson Tigers they can be for themselves. And I really have challenged them as they've gotten cleared to play, but I've challenged them to make sure that they do a good job of being more proactive in terms of taking care of their bodies. That comes down to just eating right, getting plenty of rest and spending a lot of time in the training room just kind of being proactive, stretching, and getting in the ice tub.

“Those things are going to be really important for them as they move forward just to prevent those injuries. And as everybody knows, we were decimated by injuries on the defensive line last year, which really hurt the team a lot. So just really been focusing on that. Just really encouraging those guys to kind of take care of themselves like pros.”

Eason said he was pleased with the health of his players as the Tigers set to start fall camp Friday, but he once again says he has cautioned all of them about doing everything in their power to prevent injuries.

“Yeah, we're ready to rock and roll. But like I mentioned earlier, man, just got to do a good job being proactive with our bodies and stretching and doing all the things to prevent injuries, which we had a lot of them at the defensive line position in the past,” Eason said. “So, I've challenged them to do that. They stepped up to the challenge thus far. This has got to be consistent throughout the season.”

Eason said he’s been around the best in the business, and the best are serious about taking care of themselves.

“I think for me, just having professional experience, I've been around a lot of great players. The Willie McGinests, the Shannon Sharpes of the world,” he said. “One of those things that I've learned from being around pro guys that have played double-digit seasons and longer, man, it's all about how you take care of your body. Those guys spend a lot of time in the ice tub and spend more time trying to recover more than anything. They use acupuncture yoga, dry needling, whatever it takes to be able to recover.

“And so that's how you can extend your career. And so. I've taken that knowledge that I learned in the pros and just kind of brought it to the college level. Just kind of encouraged guys, and said, 'hey, guys, I don't know what you think that the pros are about, but here's what I've seen, and here's what I learned over the 17 years that I was there in the league. And so, I just passed on the information, and they trust me at this point in time. So, they stepped up to the challenge, and I see more guys in there working with Dr. Bina (Alex Bina, Director of Applied Science) to take care of their bodies.”