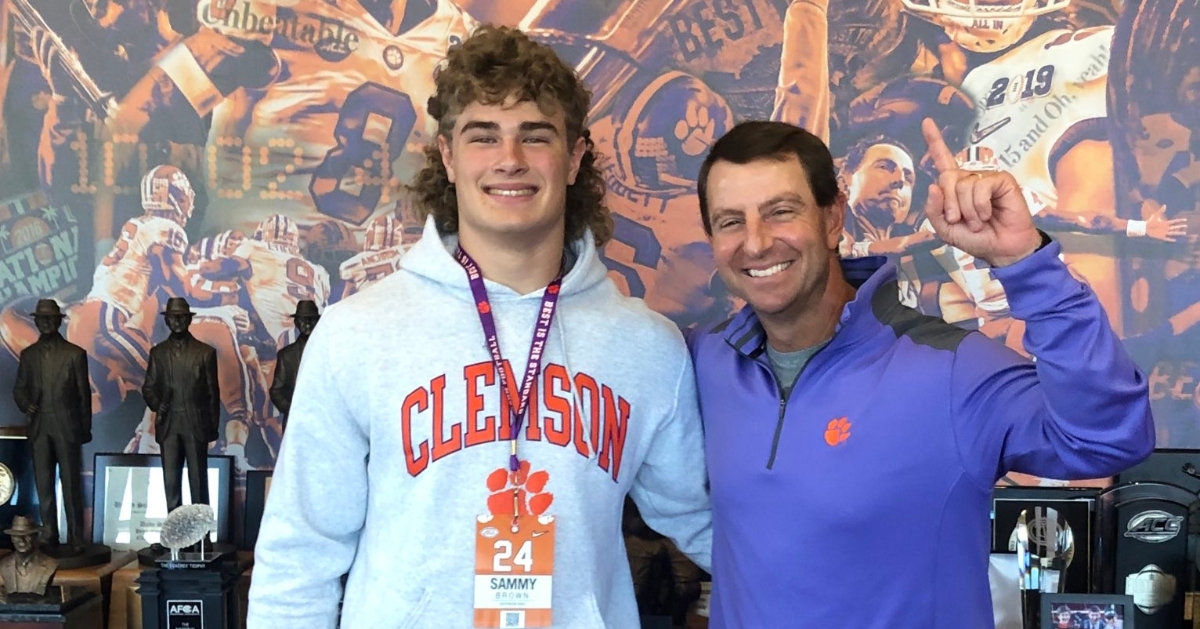 The nation’s top-ranked linebacker for the 2024 recruiting cycle was in Clemson recently and spent more time getting to know Wes Goodwin.

Sammy Brown is the nation’s No. 1 linebacker in his class, per multiple recruiting services. Brown was the first member of the 2024 to pick up a Clemson offer, and that came while he was on campus on March 12. Brown then returned on April 6 to take in Clemson’s final spring practice prior to its April 9 spring game.

Brown (6-2, 220) was on hand for head coach Dabo Swinney’s camp a few weeks ago, but he didn’t participate in workouts.

“My brother was actually doing one of the little kids' camps, so we just kind of made a visit out of it,” Brown told TigerNet. “It's just fun to get up there and meet people and build relationships because it's not like it's super difficult to get up there. It's only about 45 minutes from the house, so I really just kind of went at lunch and helped my brother move in and all that and then met with all the coaches, talked about PAW Journey, and then just watched some camp. So it wasn't really anything special, but it's just good to get up there and talk to all the coaches again.”

Brown is making sure he gets to know linebackers coach and defensive coordinator Wes Goodwin.

“I really like Coach Goodwin. He's a really genuine guy. He's not one of those up-in-your-face kinds of people that's always yelling and screaming,” Brown said. “He's super laid back and I think that's something that I really like. And he's just a regular guy. We always talk about hunting and fishing and all that stuff that I like to do. So, it's not like he's all about football and recruiting. It's kind of what I like, too.”

“We only have one other recruit visit set up,” Brown said of a trip this week. “We're going up to Notre Dame, Michigan, and Michigan State because they're all within driving distance, so that's the only thing we have planned. And anything else is really just kind of played by ear. And then this fall, Clemson is one of those places that if we can pop up, we're free and they have a home game we can just go to. So this fall we definitely want to try to get back to a Clemson game because they have a really good thing going.”

Brown said receiving the Tigers’ first offer meant something to him.

“It's really a blessing, but more than that, it's kind of a motivation,” he said. “At the same time, you're the first (20)24 guy to get the offer, so you have to kind of prove yourself and prove that you deserve that and you earn that.”

“I really like what Clemson is doing. They've got one of the best cultures in college football by far,” Brown said. “When you have a coaching staff that stays for over five years as Clemson does, that definitely speaks volumes of your culture and your environment you've got going. So I think that Clemson's got a great culture and they've got a great thing going, and I really like what they're doing.”

After a great visit and awesome day, I am very blessed to receive an offer from Clemson University!! @Mansell247 @ChadSimmons_ @adamgorney @JeremyO_Johnson @CoachConn @ClemsonFB pic.twitter.com/65yGi7998i