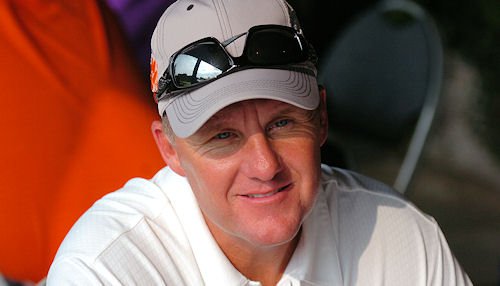 SUNSET, SC – Clemson offensive coordinator Chad Morris said he took a look at the wide receivers he had available during spring practice, and one stark thing stood out to him - a noticeable lack of speed.

Morris spoke to the media Tuesday afternoon at head coach Dabo Swinney’s media golf outing at The Reserve, and he said that lack of speed hurt the Tigers last season and his hopes are that a stellar 2011 recruiting class will help in the speed department.

“Going through our first few practices of the spring, I was very surprised at the lack of speed,” Morris said. “Just the ability to stretch out the defense, and I know our defense has some speed. The only thing I could compare it to was our defense, and it wasn’t even close.

“Then the next thing I had to compare it to was the speed I had at Tulsa, and what we had at Lake Travis [High School in Texas] and here and we just didn’t have the speed. You saw that last year when the safety would squeeze down in the box and give the run defense another hat. He could do that, because he knew no one could run by him. With the guys we have coming in, and the speed we have coming in, we need to that get that speed out of those guys.”

Morris had five full-time wide receivers to work with in the spring – Nuk Hopkins, Bryce McNeal

View Full Profile – and he said that it is time for those guys and the newcomers to come in and prove that they belong.

“We knew we have some great talent coming in, and we have to stay on them,” Morris said. “We also had some guys that woke up on third base and they don’t know how they got there. Without a doubt, we are expecting these freshmen to step in and contribute. But, they have to earn it and prove themselves.”

The new offensive coordinator then said that he already has a job picked out for the older players who don’t give maximum effort.

“Here is the thing I looked at,” he said. “They had 15 days to prove themselves to me in the spring, and I told them that I was going to focus in on the freshman guys in fall camp. Some of these guys came here highly-recruited, and they haven’t cut it. But that’s okay, because there are plenty of water cups that need to filled up on the sideline. If they are gonna play, they have to prove it. They have to be pushed.

“But it’s not just the veterans. Some of these younger guys have been hailed as Heisman Trophy winners and they haven’t even taken a college snap. They will earn what they get, and they will push the veterans. For the veterans, it is time to cut bait or go fish. They are at pivotal points in their careers, and they know the way I feel about this. I love competition.”