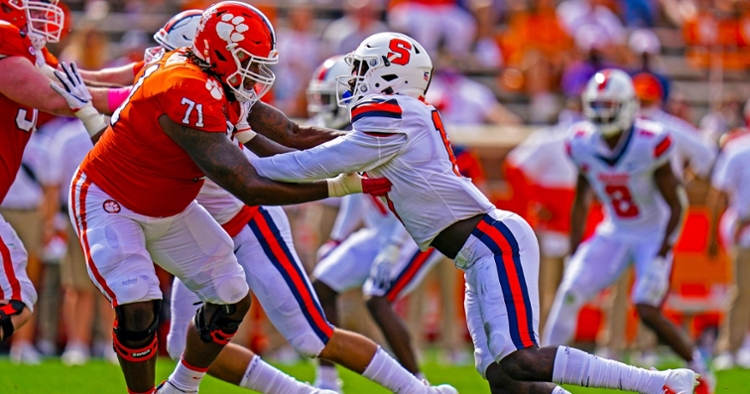 Jordan McFadden has played both left and right tackle during his time at Clemson but started every game on the right side last season. But when offensive line coach Robbie Caldwell asked McFadden to move to the left during spring practice, McFadden was happy to oblige.

"In high school -- and basically my whole football career -- I've played left tackle so it's not necessarily new to me. I've cross-trained at Clemson,” McFadden said. “I honestly feel like anywhere they put me on the offensive line I'll thrive.

"One day right before practice, coach (Robbie) Caldwell was like, 'You're going over to left today.' And I've been there ever since. Just coach Caldwell playing with it, seeing who is good where, and who has the best opportunity to thrive at each position. I think today (Monday) is either my third or fourth practice at left."

That means that Walker Parks moves to the right side.

“Walker is nasty. He wants to put people in the dirt. You got to love that from him. He is an old fashion nasty guy. He is a hard worker,” McFadden said. “Me and him work out together in the weight room and he is one of the hardest working guys I have met in my whole life. He is just a guy that just constantly wants to get better. I definitely think the hype is real.”

McFadden said he wants to take a page out of Parks’ book and get a little nastier.

"Most importantly, I just want to be nastier, moving more people off the ball, putting more people in the dirt— things like that. Just changing my mentality knowing that I can do anything against anybody on the field. Just developing that mentality in the weight room and nobody is going to outwork me,” McFadden said. "The only way we are going to get better as an offensive line, get more physical and move people off the ball, is if I lead. That's been a big emphasis for me this spring-- leading by example."

He also likes what he’s seen out of the younger players on the offensive line.

"Marcus Tate has only had three or four practices, but he's looking good early. We are so much better now than where we were last year,” McFadden said, who then added that Matt Bockhorst’s absence has created opportunity. "Paul (Tchio) has pretty much taken all of the live reps. And Mason Trotter. Those guys getting experience going vs. Bryan Bresee and Tyler Davis is really preparing them to succeed in the long run. Paul is learning so much, he's getting stronger and better mentally and physically and learning so many technique things. I definitely think Matt being out is a blessing for those guys to grow up a little bit."

Another youngster that is standing out is freshman center Ryan Linthicum.

"He's a young guy, of course. It takes a lot to learn. I think he's coming on,” McFadden said. “He's a guy that wants to learn and get better. He's a worker. He still has a ways to go to mentally get everything down, but physically I think he's got the right stuff. He's going to keep getting bigger and stronger. Those are things to look forward to in the future. Once he gets it down mentally, I think he'll be a really good player."

Hunter Rayburn is drawing most of the first-team snaps at center.

"He's a big, athletic guy. This spring, he's gotten a lot more active moving people off the ball. He's physical. His technique has gotten better,” McFadden said. “Hunter understands the offense well. Him being a big body is a big guy inside that takes up space and moves people."