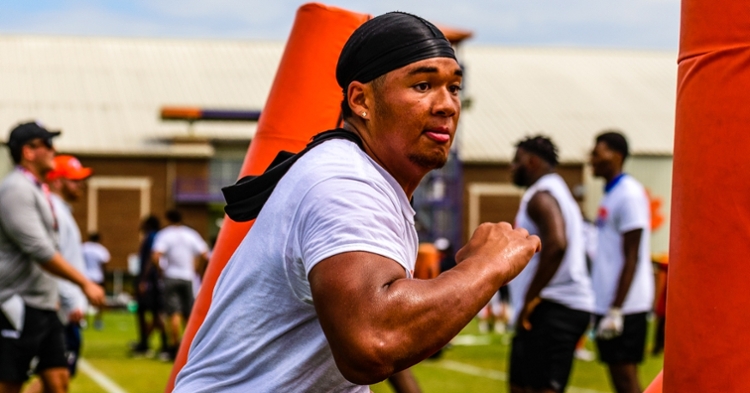 Uiagalelei works out at camp last week in Clemson.

Matayo Uiagalelei is having a summer to remember, making the rounds to see the top football programs in the country. Perhaps the most fun he’s had so far, however, was making a highlight-reel play with another 5-star that went viral on social media.

Uiagalelei is the younger brother of Clemson quarterback DJ Uiagalelei and a 5-star defensive end/tight end out of Bellflower (CA) St. John Bosco. Uiagalelei and his mother made the stop in Clemson last week for head coach Dabo Swinney’s camp, stopped in Athens for a tour of the Georgia facilities, and were in Tuscaloosa Tuesday visit with Nick Saban and the Alabama Crimson Tide.

“It's pretty fun looking at one of the future colleges that I might go to and just seeing what will fit me and what's the best situation for me,” Uiagalelei said. “Probably just seeing the culture of the schools and seeing the different cultures that each one has been the best part. Seeing the area and the people around the schools.”

Uiagalelei (6-5, 265) already boasts 19 offers, including Clemson, Alabama, LSU, Notre Dame, Ohio St., Oregon, Texas, Texas A&M, and Southern Cal, among others. He worked out at defensive end during the morning session of Swinney’s camp last Saturday, then worked out with the tight ends in the afternoon.

It wasn’t long before Swinney came out to get Uiagalelei and led him inside to work out with the wide receivers (at 265 pounds). Then a little magic happened – 5-star quarterback Arch Manning out of New Orleans (LA) Isidore Newman was on campus for a visit and the duo teamed up for the play of the week.

“In the first session, I did the defensive line and then after lunch, I did tight ends in the second session,” Uiagalelei told TigerNet. “In the middle of individual workouts, Coach Dabo pulled me from the tight ends and made me go with wide receivers. We did some more individuals and then some one-on-ones.”

Manning flipped the ball in his hands and then launched a 55-yard, over-the-shoulder strike to Uiagalelei, who was streaking into the endzone. The play quickly went viral.

“It was a perfect ball. He's really talented,” Uiagalelei said. “I would say the top two quarterbacks in my class are Nico (Iamaleava) and Arch Manning. It was pretty cool to see that ESPN posted it. I think it shows my athleticism and all the work I've put in for both positions.”

Uiagalelei, who has been to the Clemson campus many times with DJ, said this visit felt a little different.

“Getting to do the camp and working with the coaches themselves, I definitely got some more information,” he said. "It was definitely exciting to go out there and be with the coaches and even with the players who were coaching us, too. It was good to see their character and how they put us through the camp.”

He enjoyed the 1-on-1 instruction as a wide receiver from Swinney.