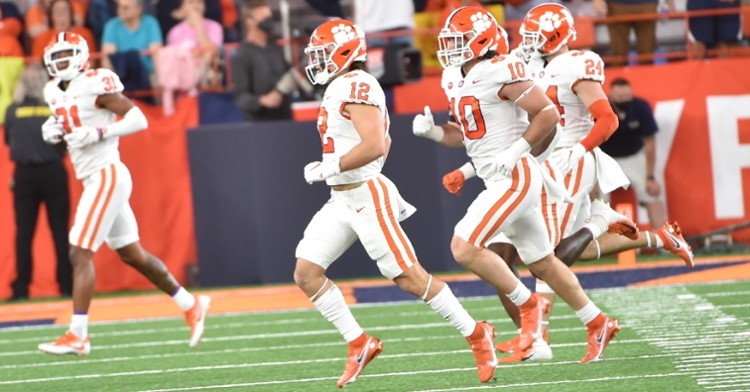 Tyler Venables runs off the field after his interception against Syracuse.

CLEMSON – Don’t expect Brent Venables to get all mushy about the play of his sons. Don’t expect tears of joy and a ton of emotion. A hug in the parking lot will do.

Clemson safety Tyler Venables played a big role in the Tigers’ win over Syracuse last Friday, snaring an interception on an early scoring threat by the Orange. Venables stepped in front of Garrett Shrader’s pass at the six and returned it to the 13-yard line.

It was the first interception of Tyler’s career, but more importantly to his father, it stopped a potential score.

"Well, obviously, it was a huge play in the game," Brent Venables said, "After having an explosive play to come right back and get a turnover in the red zone is huge. Obviously, very proud. He's earned it. He's still learning how to play safety. He played four years of high school quarterback, so I've seen Tyler just get better and better."

Tyler was a quarterback at nearby Daniel High School, playing safety only sparingly, and has to learn on the job. Against Syracuse, Tyler registered five tackles, the interception, and the first sack of his career to help the Tigers squeak out a 17-14 victory. Against Boston College two weeks earlier, he also made five tackles and broke up a pass.

That pass almost turned into an interception.

"But no, it was good to redeem himself from a week ago," Venables said. "He felt, even though we won the game, he had the same opportunity a week ago. But as I told him, it's like you haven't been there to do that, and you only gain that is through experience. The more you play, the better you'll get, and you learn through failure and making mistakes. But huge play in the game, for sure."

Venables was asked how he deals with coaching his two sons – older son Jake is a Clemson linebacker – and if it causes any awkward moments either on the field or at home.

"That part is actually easy for me," Venables said. "I'm not sure if it's easy for them or not, but you're gonna get what you've earned. You're gonna hold them accountable. I would expect that they would want that. That's how they earn credibility with their teammates, and whether that's in the meeting room or on the practice field or certainly in a game. You don’t treat them any different, and probably the hardest thing is to be a dad, during all that process that's not an easy thing to do."

When it comes to celebrating the successes, however, Venables says he knows how to react.

"No time to celebrate his interception," he said. "You have to make adjustments and get ready for the next drive. So, you really don't have that dad moment. You wait until you get home or just go in the parking lot and have a man hug."