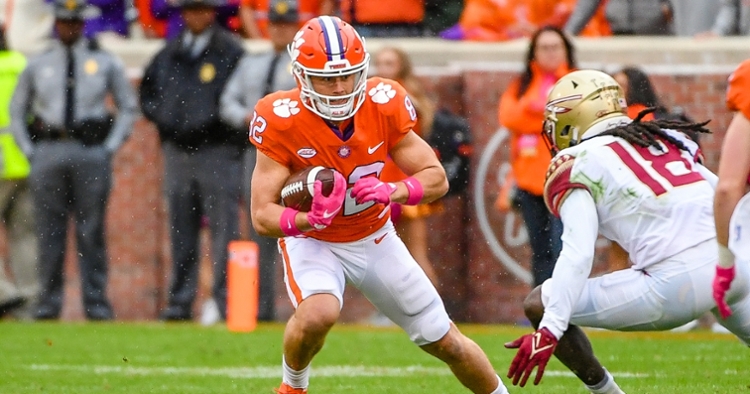 Brown reeled off a career-high punt return against the Seminoles Saturday.

The decision for Will Brown to come to Clemson was a no-brainer. The Boiling Springs native has been a lifelong Clemson fan and knew that Tiger Town was the place he wanted to come, whether that be as a student, or playing on the football field.

After showing up as a preferred walk-on and not seeing much of the field the first couple seasons, Brown stuck with it and battled through the hardships. Now, on Saturdays in Death Valley, Brown can be found returning punts on special teams and making the most of his opportunities this season. Being put on scholarship back in 2019, the redshirt senior graduate has used lessons from his late grandfather along the way.

“I’ve definitely been able to see the fruits of my labor,” Brown said. “I don’t think it’s a coincidence but my grandfather passed away back in January from COVID and his saying to us was always ‘keep the faith.’ That’s been something very near and dear to my heart, to keep the faith, to never give up and to never fold. It’s been really sweet.”

After Will Taylor went down in the game against Boston College with a torn ACL, Brown has since taken over the duties of returning punts. Last weekend against Florida State, Brown recorded a career-long punt return against the Seminoles, slicing and dicing through the punt coverage for a 17-yard return to set the Tigers up with great field position just near mid-field.

“I grew up a Clemson guy, and I’ve been a Clemson guy my whole life,” said Brown. “To finally get an opportunity to contribute and make a difference on the field, it means a whole lot. It’s been a lot of fun too. I’ve been trying to enjoy my last year knowing that I’m going to be hanging them up (his cleats) here in a few months after the season. I’m just trying to have fun with it and enjoy it as much as I can.”

As mentioned earlier, it was an easy choice for Brown to attend Clemson. While he could have gone to another school and earned playing time much sooner, Brown knew his heart was at Clemson and he wanted to be a Tiger from the time he was a young boy.

“It’s been pretty sweet for me to be here and part of the program over the last five years,” Brown said. “I’ve been able to meet a lot of cool things and win a lot of games with a lot of really cool people.”

Brown was also set up with connections to Clemson by his high school football coach at Boiling Springs, Chad Diehl. Diehl played fullback at Clemson from 2007-11 and appeared in a school-record 57 games at the time. Diehl was primarily used as a run-blocking fullback and was key in setting up blocks for “Thunder & Lightning,” James Davis and CJ Spiller.

“I believe the Lord works in very mysterious ways,” Brown said. “When I was going into my freshman year at Boiling Springs, Chad Diehl gets the job as the head strength coach, and from day one, we had a real close connection. There was just something special between the two of us. From day one he believed in me. If I was down or doubting myself, he was always there to tell me to believe in myself and pick me up.”

“He’s obviously one of the connections that got me here,” Brown said of Diehl. “He had those connections with (Danny) Pierman and Coach Swinney and all those guys. He was able to put in a good word for me. For him to go to bat for me to a big program like this, that means a whole lot to me. Chad Diehl has been a huge influence in my life and the reason I am here today.”

Being part of a team where the head coach as well as offensive coordinator both walked on as wide receivers sets a high mark for everyone in the program. Brown knows how lucky he is to be in the position he is, and he is trying to make the most out of every opportunity he is given.

“There’s definitely a standard of being a walk-on here at Clemson,” said Brown. “Coach Swinney always expects above and beyond from a walk-on because obviously we don’t come here on scholarship, so the goal is to one day get on scholarship and be able to play or do whatever we want to do to help the team. If you’re going to be a walk-on at Clemson, you can’t be the guy that’s cutting corners or skipping classes and the weight room. You have to be a grinder, a blue-collar type of guy.”

“If you want to be a walk-on here at Clemson, you have to put your nose down in the dirt and just grind,” said Brown. “That’s what Coach Swinney and Coach Elliott and all the other coaches expect from you.”