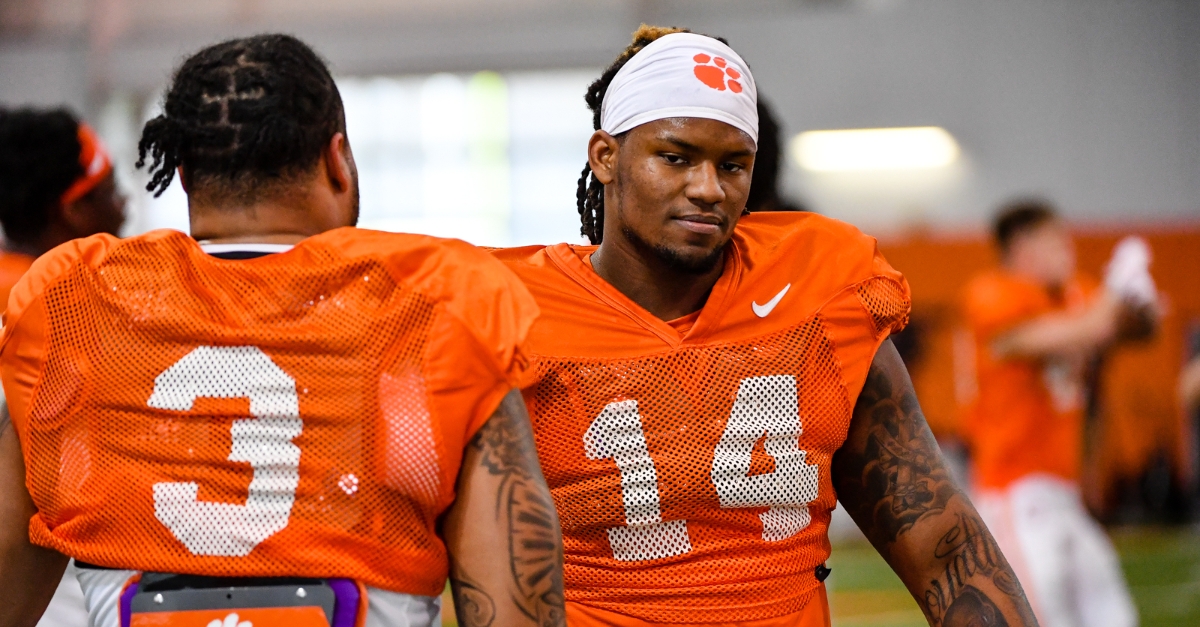 Kevin Swint (14) is expected to play this season.

CLEMSON – While Clemson's group of defensive ends is as good as anyone's in the country, Lemanski Hall is using this spring to prepare for this season and the future.

Hall – the defensive ends coach – will lose KJ Henry, Justin Mascoll, Xavier Thomas, and likely Myles Murphy after the 2022 season, so head coach Dabo Swinney coordinated a plan to give the next group of ends most of the work this spring so they can see exactly where the young guys are in their development.

The next guys beyond the aforementioned group include Zaire Patterson, Cade Denhoff, Kevin Swint, and Greg Williams. Hall knows he needs at least a six-man rotation, so this spring was an opportunity to see where his younger players currently stand and what they need to work on.

"I'm losing four guys next year - X, KJ, Mascoll, and Myles - so in order for that to work, I have to get the young guys some reps," Hall told the media after Monday's practice. "At the end of the day, you have to earn the right to play. I'm not going to put a guy in there that can't get it done because then I'm jeopardizing to the team, and I don't ever want to do that. I would love to go in with six guys and see what happens. That's kind of the rotation. Even this spring, I had a chance to put Greg and Kevin with the first group to see what they can do. They did a great job. The next thing for me is trust. I have to be able to trust that you're going to do what you're supposed to do. You're going to play the technique that's called, the defense that's called. I feel like I can trust Greg and Kevin."

To do that, the older guys have done a lot of watching and coaching as their younger teammates have gotten the majority of the snaps.

"That's what Coach Swinney wanted. He was like, 'Ski, I want you to dial back the snaps for the older guys, and let's get more snaps,'" Hall said. I needed to see Greg. "I needed to see Kevin. I needed to see Zaire and Cade. They were on the scout team last year, so they didn't get a lot of reps during the season. I was definitely able to see from a development standpoint where they are, where they needed to be, and then my expectation. I expect you to be physical. I expect you to have a desire to win a one-on-one matchup. I'm going to beat that guy in front of me. That's my mindset. I'm going to hustle, run on and off the field. I'm going to be violent on the field, a game-rep mentality. When you're on the scout team, sometimes you don't have that game rep. It's not a game-rep mentality because it's about getting looks. I'm just trying to get those guys to process that at a high enough level."

Hall spent time talking about each of his defensive ends and what, specifically, the younger players bring to the table.

"Zaire Patterson is a kid that's a developmental guy. He's done a great job in the weight room and gotten a lot stronger and bigger. The thing with him is he is raw. He's got to learn the system, learn college football, and don't worry about making mistakes. He's just got to play fast. Get in the playbook and play fast. He's doing really, really good."

"Cade Denhoff is a player that has all of the ability. He's an effort guy. He does a good job of playing with all-out effort. He's done a good job learning the playbook, and I'm pleased with him."

"We're moving Kevin around the play multiple positions from a d-end perspective. I've been pleased with him. He knows football and is very smart. I can put Kevin out there, and he can play any position on the field. I can put Kevin on the board and tell me what the position looks like. He can draw it up and articulate it. I love Kevin Swint."

"Greg Williams is another guy who moved from linebacker to d-end and has done a really good job. He was raw when he first got here. He has embraced being a defensive end. He wants to do a good job. Now, it's about putting it all together. Let's work on your get-off, your steps, and your hand placement. Let's get in the playbook. He's done a really, really good job."