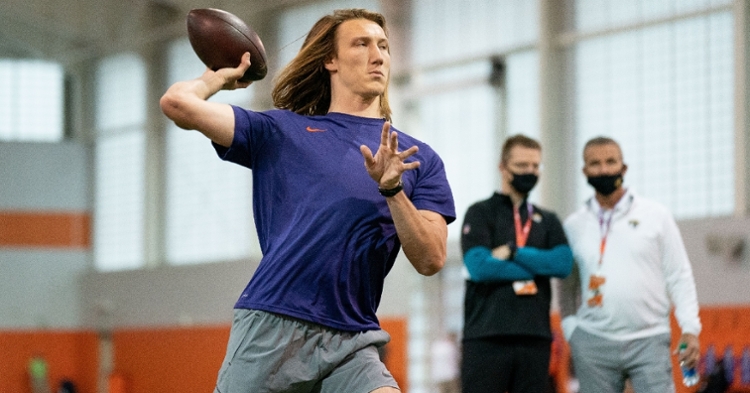 Urban Meyer got a first-hand look at Lawrence during Lawrence's Pro Day.

Tony Elliott thinks Trevor Lawrence is going to be just fine in Jacksonville, and for people that think the Jaguars’ first-round pick isn’t going to be motivated, he thinks they will all be in for quite a surprise.

Lawrence was picked No. 1 overall by the Jaguars in last week’s NFL Draft, but a story that appeared a few weeks before the draft had many questioning whether Lawrence had the drive, the motivation, or the chip on his shoulder to be a great quarterback in the NFL.

“People who are not inside of our program don't understand how we approach things. I think what he was trying to say is that he is trying to be the best version of himself and he doesn't need to create or add any extra pressure on top of that, because that is hard enough in itself,” Elliott said. “Getting up every day in the spotlight and trying to be the best is all the motivation he needs. And I think he tapped into a higher power and some people don't quite understand that and who he is as a person. He is internally motivated more than anybody I've been around and he's able to stay focused on that and he doesn't need to add any pressure.”

The path to success will be a little easier for Lawrence because new head coach Urban Meyer will more than likely run a lot of spread concepts similar to what he ran at Utah, at Florida, and Ohio State. Many of the same principles can be found in the Clemson offense.

“It will be interesting to see because you are transitioning to a different level and the style of play is a little bit different in the NFL as opposed to college,” Elliott said. “What I know about Urban from his college days is that it's a very similar system. A lot of the concepts and ideas that we do are similar to what he did at the collegiate level. He is who he is because of the way he approaches things. I had a chance early in my career to go up to Ohio State when he was there and saw he runs the program, and I think those guys are going to flourish in that environment.”

However, Lawrence has run many of those same concepts since high school and might not have to take as long to develop.

“Nowadays, especially in the NFL, everybody is trying to figure out ways to win and win right now. And so the time to develop quarterbacks is not as long as it used to be, and I think that is why you are seeing more of the concepts going from the collegiate level up, as opposed to in the past when it was going from the NFL down,” Elliott said. “I think it's from the timeframe of trying to get guys ready. And quarterback training starts way beyond the college years and these guys are playing in these styles of systems in high school and they are playing in these systems in their 7-on-7's outside of high school teams and they are running the spread concept. So I think it's more a function of the timetable in order to get a guy ready, so you have to incorporate more of the spread concepts.”