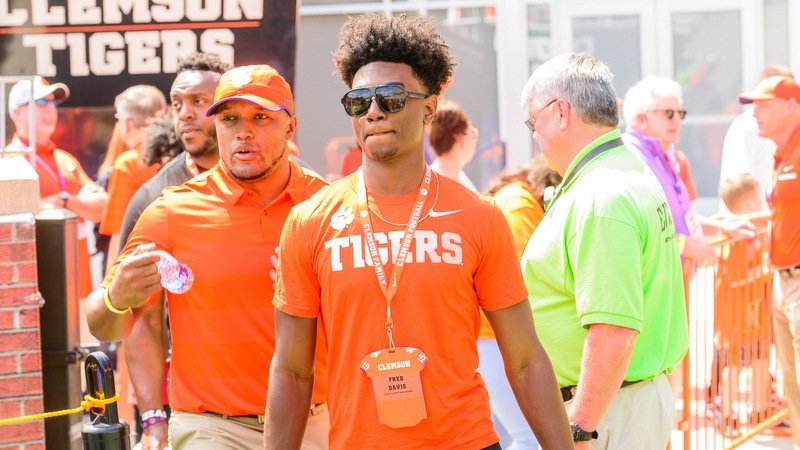 Clemson’s recruiting is on another level right now, and the recent addition to the 2020 recruiting class promises it will get even better.

Jacksonville (FL) Trinity 5-star cornerback Fred Davis II announced a commitment to the Tigers after a visit to campus over the weekend.

He is rated as high as the No. 3 cornerback in the nation and No. 23 overall (Rivals). The commitment is a second out of the weekend for Clemson secondary, joining 4-star safety RJ Mickens and the 11th overall in the 2020 class.

Davis said he was ready to focus on his senior season.

“I’m just trying to focus on just helping the team and practices and training and getting ready for the upcoming season. We have a nationally ranked schedule,” Davis said. “For the next three to four years, I’ve decided to commit to Clemson University.”

“It was the environment there. When I first went, all of the coaches showed genuine love,” Davis said. “It’s just a different type of vibe there. It’s hard to explain. All of the other schools that recruited me and were in my top six, really every school, it was just a blessing for them to recruit me and I’m very thankful. Those top six, they were on me hard. They texted me every day. I talked to the head coach every day. Those were genuinely caring but I just had to make the best decision for me.

“I was planning on making a decision early but I didn’t know if it was before spring or a little after spring, so I just decided to make it early when I was at their spring game visiting. There were like 60,000 people. The fans are crazy. As soon as I walked in, I was signing autographs and taking pictures with the fans. I’ve only been to the spring game and the junior day.”

“I expect to play when I get there. I already knew going into the situation what was going to happen, so be on the lookout,” he said.

The lure of playing for defensive coordinator Brent Venables was too much to pass up.

“Coach Brent Venables, they do an NFL scheme. When you play in his scheme, you’re basically playing NFL ball already because their scheme is the same as it is in the NFL, so you’re getting different variations of defenses,” he said. “Coach Mike Reed, he’s been producing some people and putting some people in the league. Right now from Clemson, Trayvon Mullen is fixing to get drafted.

“But it’s all of the coaches really. That’s the one thing that made me make my decision so early is because they’ve been together for years now and they plan on not going anywhere, so that influenced my decision a lot.”

Davis said he told the coaches his decision Saturday.

“I told them I was going to commit, and everybody jumped up,” Davis said. “And Coach Swinney stood there quiet. And he asked me what this meant to me. This is about loyalty to him. It’s like a marriage to him. He wants you to be all about the decision. But the room went crazy.”

Clemson holds the top average rating per commit of the 247Sports Composite rankings and is now within single-digit rating points of No. 1-rated Alabama in the rankings overall (the Crimson Tide have three more commits as well).

Davis said he expects Clemson’s recruiting to take another jump once he makes the transition from recruit to recruiter.

“This year, I can’t really speak on that right now. For sure, I’m recruiting. I’ve already got some,” Davis said. “They make it clear (who they want). I just have a top two that I’m recruiting but I don’t really want to put that out there. They’re probably watching and listening right now.”

Davis attended Clemson’s Elite Junior Day in January and added an offer in December. Florida, Miami, Ohio State, Auburn and Alabama were also in his top-six schools going into the announcement.

Davis said during his announcement that he is planning to be a mid-year enrollee.

I made sacrifices, I’ve been balling ever since...

The Florida pipeline is strong https://t.co/0SQ4LA451t