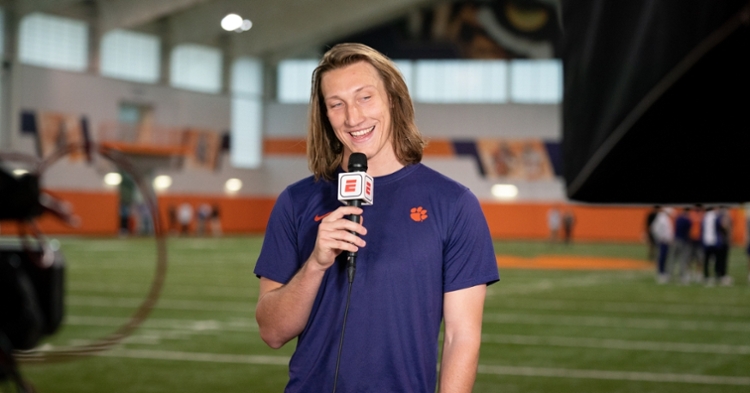 Lawrence should be the No. 1 overall pick (Clemson athletics photo).

Lawrence was a four-year starter at Cartersville High School and began starting in the third game of his freshman year, going 52-2 as a starter in his career, which included a 41-game winning streak and 14-2 record in the playoffs. Lawrence led his team to four region titles and two state titles, had 13,908 passing yards and 161 touchdowns against 21 interceptions in his career. He set state records for passing yards and passing touchdowns that were previously held by former Tiger Deshaun Watson (2014-16). He was 177-of-256 passing for 3,396 yards and 41 touchdowns against one interception in 12 games as a senior.

According to Herbstreit, Lawrence is in a good position even though Jacksonville head coach Urban Meyer is in his first year.

"Well, I think I think he's going into a unique situation with Urban Meyer coming in there in year one," Herbstreit said. "And Urban's went out and hired Brian Schottenheimer and Darrell Bevell, a couple of guys that obviously have a ton of NFL experience, I think that helps him. And Urban Meyer is going to create an energy. I think that falls more on Urban Meyer's shoulders than just the quarterback. I think, obviously, anytime you’re the first pick overall -- you're going to feel some of that way, too.

"But as far as that franchise needing to go in a different direction, I think the timing for him is good because you've got a high profile first-year head coach that is going to have a lot of people every week who are going to be dissecting his every move as much as the quarterback. If he were a Doug Marrone, everything's going to be on Trevor Lawrence because he's been there for a number of years. Is he going to save the day? I think right now it's a combination of Urban Meyer trying to save the day and then of course Trevor Lawrence as well."

Herbstreit said that Lawrence has known this kind of pressure since he was in middle school.

“This is the one guy that was already about 6-4 in eighth grade and it was already, ‘Oh my God, have you seen this kid out of Georgia? Holy cow, this kid can make every throw and he's an eighth-grader.’ He has been in the spotlight and in this quarterback world that now is going down in some cases, to middle school,” Herbstreit said. “That's all he's known since he's been about 14. The guy started as a freshman in high school in a football-rich state. He went 52-2 as a high school quarterback. I'm as impressed with him playing as a freshman in high school with 18-year-olds as anything he's accomplished in his career at Clemson.

"And then he goes to Clemson and he's the savior of Clemson. Deshaun Watson had already been gone and they had a one year with Kelly Bryant. And the very next year, all the media and all the fans were like, ‘We've got a player like Deshaun Watson, if not better.' And so that the bar was so high, and that pressure was so intense.

“And he just never really showed like it was too much for him or he was uncomfortable with it, so I don't think there's anything that he's going to see in Jacksonville that's going to make him feel a weight that he is not already felt and, to be honest with you, he’s already known that weight to a degree or varying degrees since he's been in middle school. And to me, I know that that's probably the area that's probably his greatest strength, is how he'll handle the pressure of trying to turn a franchise around.”

Lawrence recorded one of the most celebrated careers by a quarterback in college football history from 2018-20, leading Clemson to a national championship as a true freshman in 2018 and serving as the face and voice of the sport in the two seasons that followed. He concluded his career 34-2 (.944) as a starter, the third-best winning percentage by a starting quarterback with at least 30 career starts since Division I split in 1978, trailing only Miami’s Ken Dorsey (.950) and USC’s Matt Leinart (.949), according to ESPN Stats & Info. He exited as the winningest starting quarterback in Clemson history, surpassing the 32 career wins held by Rodney Williams, Tajh Boyd and Deshaun Watson, and finished second in 2020 Heisman Trophy voting, tying Deshaun Watson for the highest finish in school history.

Former NFL GM Mike Tannenbaum made an appearance on the ESPN morning show Get Up on Wednesday morning, giving Jags fans an idea of what to expect in their next quarterback. Tannenbaum compared Lawrence to Andrew Luck, who many consider the best quarterback prospect of all-time.

“Big, strong and athletic. Andrew Luck was a better athlete than people realized,” Tannenbaum said. “He could run you over, he could make you miss, he could make all the throws. Trevor Lawrence is the same way (sic). He gets so much credit for his arm strength, which he should. He’s a really good athlete and he’s going to be dynamic in Urban Meyer’s offense.”