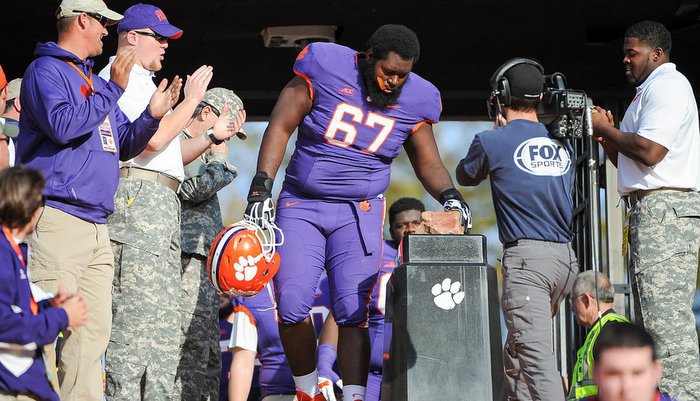 The former Clemson offensive lineman and Chester (SC) native exited his senior season expecting to get a chance with an NFL team, but a recurring back injury kept him off of the NFL Draft boards and scared a few teams away, making his path to becoming a professional football player a little more difficult.

Davis told TigerNet recently, that he was in contact with several teams up until he couldn’t participate in Clemson’s Pro Day, where a herniated disk caused coaches and general managers to not want to take a chance on him.

“I had a herniated disc in my back, the exact thing I had my freshman year,” Davis told TigerNet. “It's just kind of one of those things that builds up over time, so a lot of pressure on it. There's nothing that really sets it off, it's just a build up and eventually hits the breaking point.

“I was receiving a lot of calls before the injury flared up because no one really knew the injury was there. I'm going ahead and thinking that I'm going to get drafted so I start training down in Atlanta with Chip Smith and one day it just doesn't feel right,” Davis said. “The next morning, I couldn't move at all. The injury comes up and I'm running around from doctor to doctor seeing what's up and Pro Day gets here and I can't do anything. I could literally just feel myself sliding off the draft board. During the draft, there were a couple of teams that actually called me and said, "Hey, we don't know if we'll pick you just because of your injury. It's going to be risky and we may not want to make that pick." But, as soon as the draft was over, I was already getting calls and offers.”

However, Davis got his chance when the Denver Broncos offered him a free agent contract, but that opportunity came to a screeching halt when he went through a physical prior to the rookie mini-camp.

“I flew out to the Bronco's because I got an offer from them,” Davis said. “I assumed they had talked to my agent because they would have known I was fresh off surgery. I get there and expect to run through as much as I could, rehab with the team, and start hitting the playbook and learning as quickly as possible. So, they have a big physical that day and the doctors said you can't practice because you won't be able to do anything. I was like, I'll be able to do something because I've worked out on my own a lot too. I will be able to do most of it, I just won't be able to do 1-on-1’s or anything. And they said, you can't lift and you can't do any live work, which is a major part of the mini-camp, then you can't really do anything. I got there, met some players, had a meeting and then I was back on the plane going back to Clemson.”

Despite the concerns from Denver, Davis said he is working out on his own and hopes to pass the physical in July

“I'm rehabbing now in Clemson and I will take another NFL physical at the end of July,” he said. “And if I pass that, my agent says he is still in contact with about five teams, so I'll probably be going to camp with one of those teams. I definitely feel like I'm going to be good to go. I've done a lot on my own and I'm expecting to be fine come camp time. I’m doing mostly stretching and stuff like that.”

In the mean time, Davis is trying to stay mentally sharp so when the time comes he can take full advantage of his opportunity.

“I think it will be a really quick hit knowledge for me,” he said. “Even in talking with the guys from Denver - before I signed a contract - I started studying. I broke down Kubiak's running scheme and he's like a big zone guy. The one cut dark system. I seriously broke down all of the offensive lineman and d-lineman that are coming on, including like the outside backers because they are basically lineman at this point. I think I will really be able to pick up the knowledge and that is one of the most important things that there is. I think I'll be able to do that well."

Davis played every position on Clemson's line except for center, and he hopes that versatility will make an impression on NFL coaches.

“It is definitely going to help me," he said. "The Denver Broncos, actually I've heard they travel nine, which is the most I've heard of any NFL team. But, even with that, being versatile is something that you can't really coach and I know that is a great thing they are looking for.”