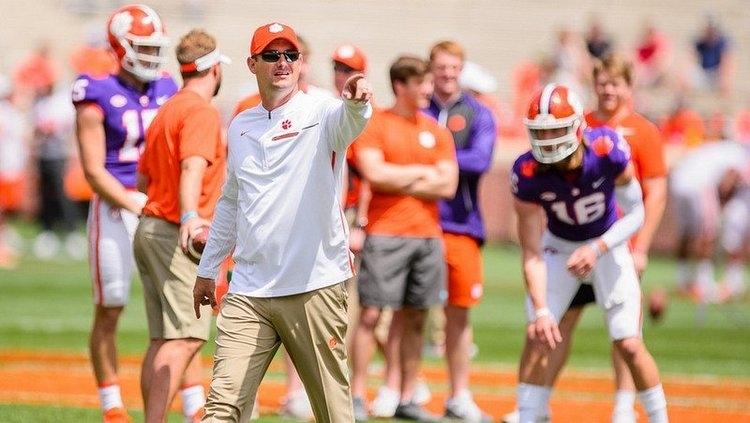 Jeff Scott has been around the rivalry for 26 years

CLEMSON – Jeff Scott has seen both sides of the rivalry between Clemson and South Carolina, from Deshaun Watson’s gritty play to tiger paws painted in his dad’s driveway.

Welcome to rivalry week in the Scott household.

“Getting ready for South Carolina, this is always an exciting week for players and coaches, anytime you're part of a rivalry game,” Scott said Monday. “I've been fortunate to be on the sidelines as a coach's kid, player, coach's kid and then a coach, so I think this is my 26th game going into it. It's always something you look forward to around the year. For us, this is one of our team goals and kind of a season of its own.

Scott’s father Brad was the head coach at South Carolina from 1994-1998, and Jeff says he remembers when Clemson fans painted his dad’s driveway in Columbia.

“One thing I talk about every time we play South Carolina is the year we had tiger paws painted on our driveway when my dad was coaching at South Carolina,” Scott said. “That was a memorable morning for sure and it just kind of speaks to the rivalry. It was up until last year that I had someone admit that they were the ones that came in the middle of the night from Clemson to paint those tiger paws.”

As the son of a coach, a player, and now a coach in the rivalry, Scott has plenty of memories but only a few stand out.

“As a coach, probably the best memory is when Deshaun went out and played on a torn ACL and really kind of turned the streak that was,” Watson said. “His determined spirit that he wasn't going to lose and he was going to help us turn that. That was a pretty impressive performance by him and our team that year. As a player, my main opportunity to play was being a placeholder for field goals, so being able to be a part of the last-second field goal in 2000, that was definitely a memorable experience. Any time you're part of a rivalry, there are always big moments.

“I think the biggest thing I've drawn from being a part of this rivalry for 26 years, the most excited team, the most passionate team is not always the team that wins. It's the team that executes. I can remember when we had our spell and we weren't winning this rivalry game like we needed to. We wanted to but we just didn't execute. We turned the ball over. I think that's a good reminder for our guys. There's no doubt that there will be a lot of juice in this game like there always is, but being able to channel that emotion the right way and really focus on ourselves and our execution is really what's going to allow you to have success.”

“I felt like some of those games we lost when we were on the other side of the streak, I felt like we had a better team overall, but did not play well enough that day,” he said. “They were the better team that day. A lot of it, you can go back and look at the turnovers that we had offensively. I think a lot of it can be credited back to those turnovers. There was a streak at one time that the road team won the game for several years in a row. You can look at a lot of different things but at the end of the day, it shouldn't be different than a lot of teams that you play in that the team that performs the best on that day is going to win.

“The rivalry part of it and the added juice and all of that stuff is fun but can become a distraction sometimes if you let it. I think that's the reminder for our guys is to really channel that the right way and the last few years we have.”

On returning to the Hammond School

“Their defensive front is very talented and they've created problems for most everyone they've played this year. They're physical and I think they play harder than they did in the past. No. 3 (Javon Kinlaw) has been a problem for everybody all year long. He requires a lot of double teams which allows some of the other guys to get some one-on-one matchups. I think it's definitely the best that we've played against South Carolina probably in the last four or five years. It's definitely got our guys' attention and our guys know it will be a good challenge. We hope as our season goes, we'll continue to play some other teams that have really good defensive fronts, so this is just what you come to expect this time of year as when in our Championship Phase.”