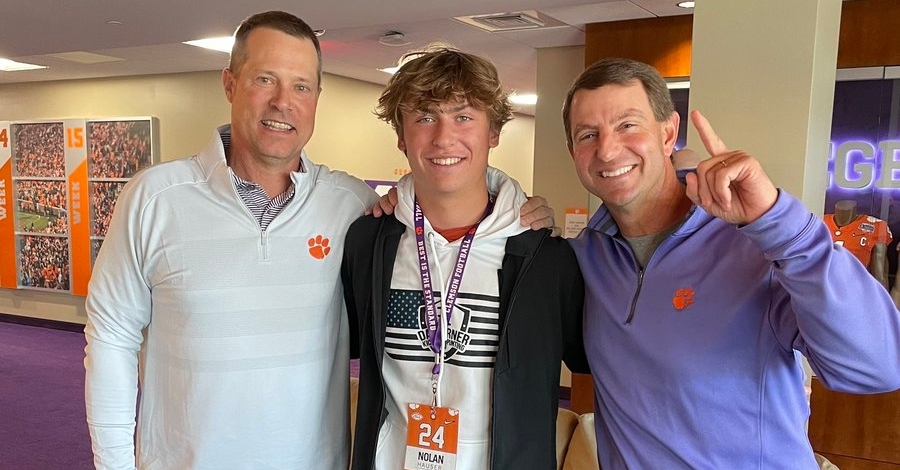 Nolan Hauser committed to his dream school last weekend, and while he sees it as an opportunity to kick for one of the nation’s top programs, he also sees it as carrying on the family tradition.

Hauser visited Clemson last March, then was back on campus for the NC State game in September. He made an unofficial visit for the Miami game earlier this month, when he received the offer. He made the return trip last Saturday to tell the coaches his plans.

“I was there for the NC State game, and they invited me back for another game. I went to the Miami game unannounced, and Coach Swinney offered me after the game,” Hauser told TigerNet. “I came back for the game against South Carolina and committed.”

What led to the decision?

“My family and I talked about it. It's always been a dream of mine to play at Clemson,” Hauser said. “Growing up and watching them play, it's always been a dream. I really figured it out once the offer came through. I was like, 'I can play for my dream school,' which is awesome for me and it's what I've always wanted to do.”

His father, Scott Hauser, played baseball at Clemson, and his mother, Sheri (Bueter) Hauser was an All-American in soccer for the Tigers. She became the Clemson all-time assists leader and is in the Tigers' Hall of Fame. Older sister Ella Hauser is on the women’s soccer team at Clemson.

“It's my legacy. My commitment song was about to be, 'Family Tradition' by Hank Williams, Jr.,” Hauser said.

Hauser said he told Swinney after the South Carolina game.

“I told Coach Swinney himself. He was so happy. He hugged me,” he said. “It was in the locker room, so my parents weren't in there which was unfortunate, but I had to do what I had to do. We talked about it and I told him it's where I want to be and where I want to call home. He was really happy for me, but they were kind of shocked that I committed so early.”

Hauser is the new N.C. High School Athletic Association state record holder for most career field goals after connecting on three attempts in a fourth-round loss at Grimsley last week. As just a junior and with an entire season ahead of him next fall, Hauser has hit 54 career field goals, breaking the previous record of 52 (and four would tie him for the national record).

According to Chris Sailer Kicking, Hauser is a five-star prospect, standing at 6-foot and 170 pounds.

Hauser also reported offers from Maryland, NC State, and North Carolina. Sailer lists Hauser as the No. 6-ranked kicker for the 2024 class.