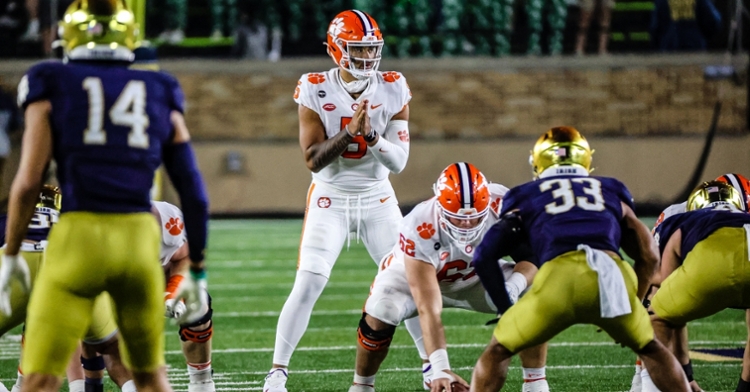 DJ Uiagalelei went on the road and threw for the most yards ever against Notre Dame.

I was sitting in a hotel room before a Clemson road game several years ago and was watching an Alabama game on CBS Sports. Danielson was acting as the color commentator for the game, along with play-by-play man Verne Lundquist. Danielson, who so often has gushed over Alabama head coach Nick Saban and all things SEC (hey, he knew where the money for his paycheck was coming from), was once again straining the limits of believable hyperbole in discussing the greatness of Alabama football.

Danielson said that he didn’t believe any team could win a National Championship running the spread, saying that to win in the modern game you have to recruit great offensive linemen and run from the I-formation and smash everybody on the way to the title. His opinion was that was why Alabama and LSU were competing for titles every season.

Of course, Danielson is an old-school guy, and he once famously told a reporter in 2008 that the spread was quickly going the way of the wishbone, and that teams were going to realize that running a two-back set was the way to go.

“What I said, and it was before the season, was that I think the spread has peaked like the wishbone did in the mid-70s,” Danielson said in 2008 to a reporter in Michigan. “I predict that Michigan will be the last of the top major programs running only the spread. It’s going to go the opposite way, and it’s going to go back to the way LSU, Ohio State, USC and Alabama are using it.

“Instead of teams going more to it, I think you’ll see teams going to it as part of an offense. The top schools can get the best talent. For them, there’s no need to do it ... I love it as a part of my package, not as the only package.”

This isn’t to bash Danielson – he’s great at what he does – but coaches saw the spread as the great equalizer and fine-tuned it with great quarterbacks.

Saban stuck to his guns until Clemson ran up and down the field on his team’s in 2016 and 2017 to the tune of a combined 75 points, 184 plays, and 1,061 yards. Now, the spread game with the RPO (run-pass option) looks is the offense of the here and now. That will probably change at some point – offenses always change and evolve – but now even the best head coaches understand you have to have a dynamic offense to win a title and that you have to recruit defenders that can meet the challenge.

That includes linebackers, where Clemson has used players like Dorian O’Daniel and Isaiah Simmons and now Trenton Simpson as athletic hybrids who can cover in the slot as well as stop the run.

“You're seeing as the game has changed. All these slots, these really athletic tight ends and the RPO stuff, you have to have guys that can cover,” Swinney said recently about the changes in the game. “So you know, having true SAM linebackers, you're limited. Because you're not gonna play much man coverage with a true SAM linebacker on Hunter Renfrow or Braden Galloway.

"And then same thing in the box. You know that WILL backer, what he's got to be able to do and the space of the game... You know, I think it's just evolved. And that is the position that I think that has been affected more than safety.”

The Tigers have Simpson on campus now, and they see freshman safety Andrew Mukuba as the type of player who can fill that role. Another athletic linebacker, Barrett Carter, is slated to join the team in June.

"Everybody now is looking for a little different guy," Swinney said. "You know we've had some of those guys. Dorian and Isaiah Simmons... Trenton. Guys that can, you know, play linebacker but run like safeties and cover a little bit like corners from time to time if needed."

Swinney said that even the safeties are having to play a different game than they did 10 years ago.

“It's a different world. It's so different. You don't have as many people under center. It's option football,” Swinney said. "That is what it is. You have shotgun and ball in the belly, and first-level reads and second-level reads and third-level reads and then boom it's a quarterback run or a pass. It's basically a triple-option attack out of the spread with dudes flying down the field on you. So it's very difficult and it's totally different than it was 10 years ago and it's not even close. So many different formations and tempo and adjustments that you have to make. How you have to read things and adjust things because of the RPO's and how you have to disguise things.

"The game has changed and involved immensely at that position. It's a very difficult position to play in today's game.”