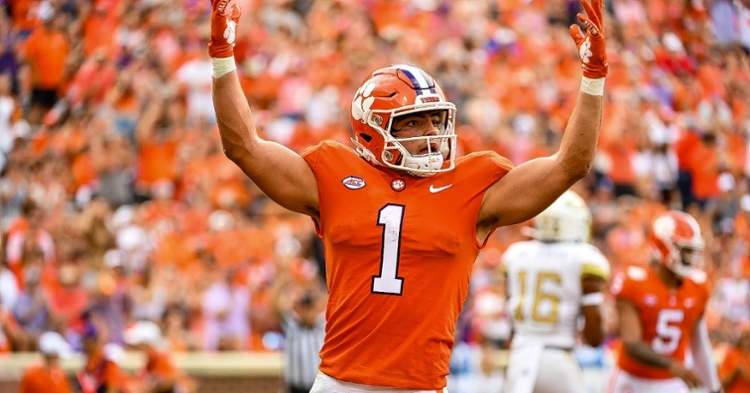 Shipley reacts after an early score.

CLEMSON – From weather delays to multiple reviews and plenty of game stoppages, there was never any flow to the game between Clemson and Georgia Tech, but the Tigers found a way to get the job done.

OFFENSIVE PLAYER OF THE GAME: If he hasn’t already earned it, freshman running back Will Shipley showed why he should be the starter. When nothing else seemed to go right on offense, the Tigers turned to Shipley, who carried the ball and the offense for most of the game.

DEFENSIVE PLAYER OF THE GAME: Linebacker LaVonta Bentley got his first career start Saturday afternoon and continued the impressive play we’ve seen through the first part of the season. Bentley finished with a career-high 13 tackles, including one sack and 2 1/2 tackles for loss.

*Shipley Time – The teams traded punts to start the game, and the Tigers relied on Shipley to get them into the endzone on the second drive. Following a sack by Xavier Thomas that pinned the Jackets at their one four, Georgia Tech punted and the Tigers took over at the Jacket 39. Shipley ran on six of the seven plays and scored on a three-yard run up the middle, giving Clemson a 7-0 lead with just under five minutes remaining in the first quarter.

*Lightning Delay – The game was delayed for one hour and 52 minutes due to lightning in the area, which resulted in a loss of halftime. After the delay, Georgia Tech kicked a field goal as time expired in the second quarter to cut Clemson’s lead to 7-3. The Yellow Jackets promptly received the kick to open the third quarter after a TV timeout.

*Fourth Quarter Drive – The Tigers finally put it together in the fourth quarter. Clemson took over at its own 34, and riding the hot hand of Shipley and a little room in the passing game. The Tigers moved steadily down the field, and a Shipley 15-yard run brought the remaining crowd to its feet. However, Shipley threw off his helmet and rolled around in pain as the stadium held its breath. He eventually popped up and ran off under his own power – to the cheers of the Clemson faithful – and following a seven-yard pass to Davis Allen the Tigers had the ball at the Georgia Tech three-yard line. Shipley ran in behind left guard Marcus Tate and was met at the line of scrimmage, but kept his legs moving and bulldozed his way into the endzone and Clemson led 14-3 midway through the final quarter.

*Late stand by the defense. The Jackets were going for a touchdown late when James Skalski stopped a shovel pass on fourth down at the Clemson two. The Tigers would eventually give the Jackets another chance after an inexcusable safety – but the Tech was unable to move the ball and Skalski’s play stood up.

UP NEXT: Clemson faces its first ACC Atlantic opponent as the Tigers travel to North Carolina State for a 3:30 kick against the Wolfpack. NC State hosted Furman Saturday night.

CJ Spiller to be honored for Hall of Fame next week in Las Vegas
Post your comments!