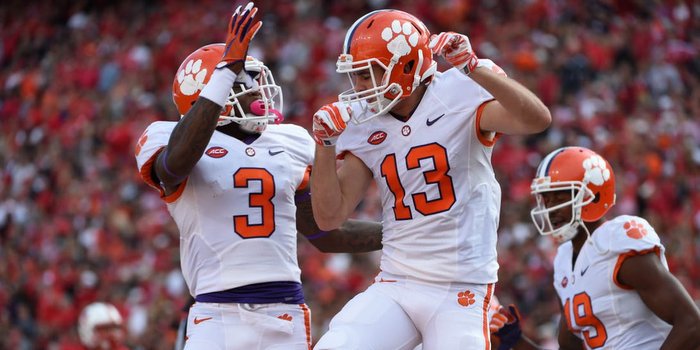 Hunter Renfrow celebrates his first half touchdown with Artavis Scott

RALEIGH, NC – There were plenty of tricks and treats in Saturday’s Halloween matchup between Clemson and N.C. State at Carter-Finley Stadium.

PLAYER OF THE GAME: Deshaun Watson is hands down the player of the game. The Georgia native had a career day, completing 23-of-30 passes for 383 yards and five touchdowns. He also added 14 carries for 54 yards and a score. His quarterback rating was 238.9.

THE GOOD: Clemson’s offense continues to click on all cylinders, despite playing the No. 3 ranked Wolfpack defense. The Tigers found success running the ball and throwing the ball with 624 total yards – 241 yards on the ground and 383 yards passing. Eight different players caught passes. Wayne Gallman had another dominant day running the ball with 172 yards.

THE BAD: Clemson’s defense has been stellar this season, but had their first bad game Saturday night. The Wolfpack amassed 389 total yards – 135 yards on the ground and 254 through the air. N.C. State was two-of-three on third down and scored three times in its five trips to the redzone. Clemson gave up four rushes of 10 yards or more and six passes of 15 yards or more.

The bright spot was that N.C. State had been very good on third down coming into the game, but Clemson held the Wolfpack to just 4-of-15.

N.C. State’s 41 points are the most that Clemson’s defense has given up since the 2014 opener against Georgia, who scored 45 points. In the ACC, the last time Clemson gave up over 40 points was in 2013 when Florida State scored 51.

THE UGLY:Simply put, special teams was a disaster. Kicker Greg Huegel has been very good through the first seven games, and while he made two field goals – 29 and 41 yards – he also missed two extra points. Andy Teasdall only averaged 36 yards on his three punts.

And, then there was kickoff coverage…Clemson responded after N.C. State’s opening drive touchdown only to allow Nyheim Hines to go 100 yards to give the Wolfpack a 13-6 lead early in the first quarter. It seemed like kickoff specialist Ammon Lakip had things figured out until Clemson started pooch kicking late in the third quarter. After the Tigers went up 53-34 with just over 11 minutes remaining in the game, Lakip again kicked the ball short and the State player lateraled the ball to Bra’Lon Cherry who took it 47 yards, setting up another Wolfpack touchdown.

Clemson could get away with the gaffes this week, but probably won’t get as lucky next week against Florida State.

WHAT’S NEXT: Clemson returns to Death Valley to take on Florida State in a winner take all game for the ACC Atlantic game and the right to play in the ACC Championship.

N.C. State looks to rebound next week at Boston College.