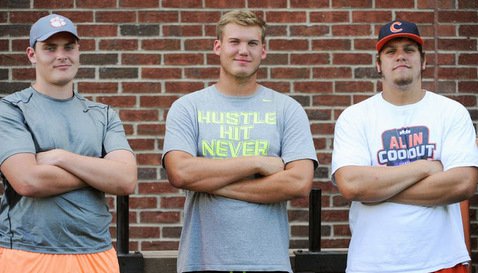 We’ve all heard the clichés, the axioms, adages, maxims and precepts regarding winning football.

Good football teams are built from the inside out. Games are won in the trenches. You get the idea – teams that achieve long-term success are built with a strong foundation on the offensive and defensive lines. For years, Clemson has been able to recruit some of the nation’s best skill players but when going against teams with elite talent has struggled along the lines of scrimmage.

Tommy Bowden
Head Coach
View Full Profile ’s best team. That all disappeared in the early moments of the game when it was obvious that the Crimson Tide was just better along both lines of scrimmage.

Since that time, Clemson has been able to nab good defensive linemen, and that was never more evident than when you look at the 2014 Tiger defensive line, a senior-laden group that was arguably the nation’s best. However, offensive line struggles have a real and constant presence during Dabo Swinney

Dabo Swinney
Head Coach
View Full Profile ’s tenure, and the lack of a punishing run game and ability to take over games on a consistent basis has plagued Clemson’s offense.

That’s why Clemson’s 2015 recruiting class – currently ranked 4th in the nation by ESPN – makes the future seem a little brighter than it already looks.

In the past, Clemson’s recruiting classes have been heavy on skill players and linebackers but lacking in picking up big-time prospects on the offensive line. In 2009, only one lineman cracked ESPN’s Top 150 and that was J.K. Jay, who never played a significant snap at Clemson and retired due to injuries. In 2010, the highest-rated player was Kalon Davis, the nation’s No. 29 tackle according to ESPN. In 2011, the two headliners were Ryan Norton (No. 11 center) and Spencer Region (No. 9 offensive guard). In 2012, the tide began to turn when Jay Guillermo – the No. 1 center in the nation – was signed along with Patrick DeStefano, the nation’s No. 11 offensive tackle. The 2013 class was notable in that Tyrone Crowder – the No. 5-rated guard – was the one notable signee along the offensive line. In 2014, another class heavy on skill players and linebackers – Clemson picked up just two offensive linemen in Justin Falcinelli (No. 27 OT) and Taylor Hearn (No. 35 offensive guard).

Considering the injuries to Giff Timothy, DeStefano and Jay in recent years it would seem that signing just one or two notable offensive linemen per class has led to depth issues along the line. That’s why this class is notable – the Tigers have 21 commitments and a whopping 11 of those are offensive or defensive linemen. On the offensive side of the ball, they are Mitch Hyatt

View Full Profile (No. 32 OT). On the defensive line, the Tigers have six of the nation’s Top 300 players – Christian Wilkins

A recent article about Florida St. remarked that the Seminoles were built for their title run by focusing on four key areas in recruiting - quarterback, offensive line, defensive front and defensive secondary, areas that Clemson’s coaches have pushed heavily the last two recruiting classes. The Tigers also have a strong start on 2016 with 3-star guard Sean Pollard

View Full Profile . If championships are won in the trenches – or any other cliché you wanna throw out there – Clemson looks to be in good shape. The key is continuing to recruit that way and not let it be a one-year deal. Do that, and you’re looking at the kind of success that schools like Alabama have had.