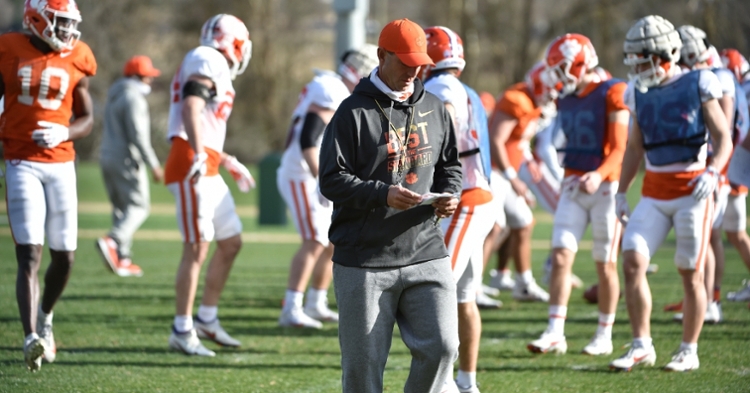 Swinney has pushed many of the right buttons in the past.

That quote resonates with me every time the Clemson program enters uncharted worrisome territory. And make no mistake about it, this is uncharted and worrisome territory as National Signing Day looms, the defensive coordinator is now the head coach at Oklahoma, and changes across landscape of college football (such as Texas, where they appear to be using NIL to buy players instead of actually recruit them) leave many wondering when the next shoe will drop.

During the 2010 season, Swinney tried to navigate his way through a tumultuous season that saw frustrating loss after frustrating loss. One of those losses was at North Carolina when the defense gave up too many big plays, the offense sputtered for most of the day, and the team committed too many penalties.

Swinney didn’t mince words after the game, saying he was embarrassed.

“First off, I’m extremely embarrassed,” Swinney said. “This team deserves better; Clemson deserves better and the fans deserve better. This is just not a very well-coached football team right now and it’s my fault. I’m extremely disappointed in what I saw today. I saw a team that wasn’t very smart, I saw a team that wasn’t very disciplined. I saw a team get a lot of critical penalties, right from the beginning of the game on the first play.

He then went on to say something he has said several times throughout his career – keep trying and eventually you will bust through. Not long after, he hired Chad Morris.

A year and change later, I stood in the Clemson locker room after the Orange Bowl while then-defensive coordinator Kevin Steele scratched his head and called the loss, “ugly.” Ugly was not even the right word, and while Steele searched for answers I strolled into Swinney’s press conference, and he said those words again after he was asked if he was confident the program was in good shape.

““I'm as confident as I was last year, standing here in a press conference at 6-7 and telling you we'd fix it,” Swinney said. “I'm confident in that we'll be better. We'll be better, no doubt in my mind that.”

Brent Venables showed up soon after.

The Tigers returned to earth a little in 2014 – injuries played a key role – but beat Oklahoma in the bowl game after Tony Elliott and Jeff Scott were named co-coordinators. And, except for a hiccup here and there, the ride has been smooth.

The 2021 season has been one of injuries for a team that is offensively challenged. Losing Venables, seeing recruits question their commitment, having another coordinator interviewing at a few schools, and current players wondering what is going on, the program now faces perhaps the most critical juncture of Swinney’s tenure.

More critical than 2010? Than 2011? Absolutely. Clemson was still in the valley back in those days. No mountaintop had been scaled. That mountaintop has been scaled, facilities have been built, and money has been spent to put a fantastic coaching staff together. What happens next – whether it’s in recruiting or in whatever hires happen – stands as perhaps the moment we will all look back on one day as the defining time in the program.

He has sworn he will fix it before. He is telling people it will be fixed now. And the coming days and weeks will tell the tale if that happens.