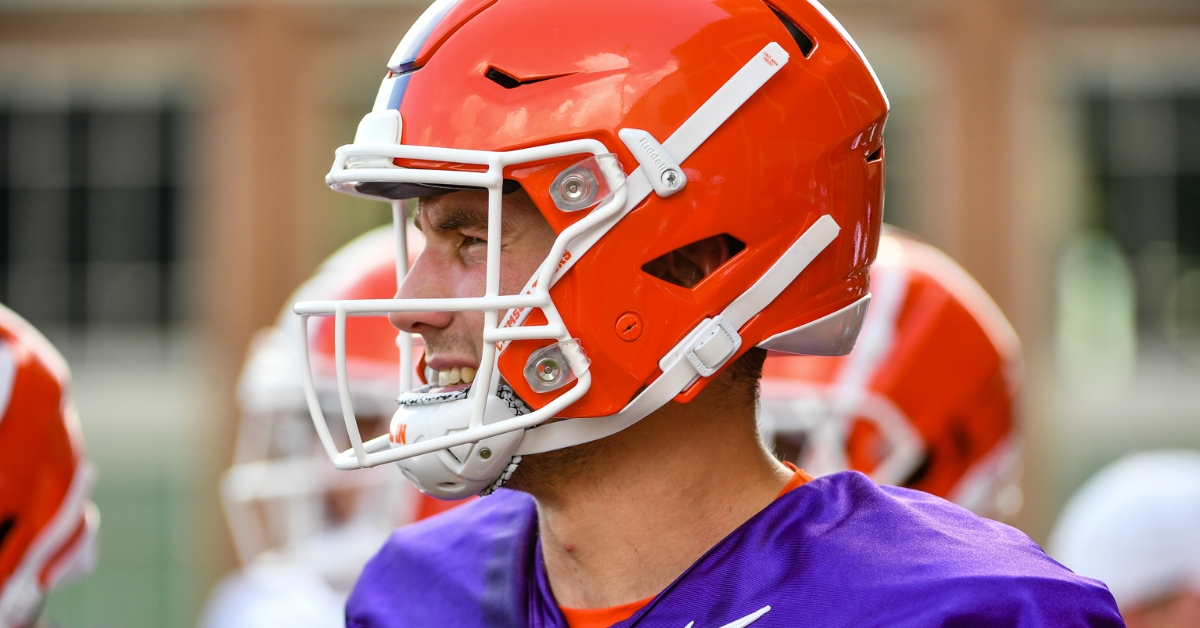 CLEMSON – Hunter Johnson looked like he was having fun, something that head coach Dabo Swinney confirmed. In fact, Swinney says Johnson is living his best life.

Practice ended as dusk settled over the practice fields Wednesday afternoon in Clemson, and each one of the Tigers’ six quarterbacks stayed late to get in extra throws. One by one they drifted away, leaving only sixth-year transfer Hunter Johnson. Johnson threw route after route to receiver Blackmon Huckabee, with Huckabee lining up on the hash and breaking right or left and into the endzone. Throw after throw was on the money.

After a few dozen throws, Johnson nodded at Huckabee, grabbed his football and jogged towards the locker room before turning around and looking once more at the practice field. The upper deck of Death Valley’s North Stands juts above the trees that line the field, and Johnson gazed that way before smiling and walking through the doors and into the building.

Swinney was asked if Johnson, who is here to mentor the Tigers’ younger quarterbacks and add valuable depth in his final season, is already in coach mode. Swinney said no with a smile as he watched Johnson throw.

Johnson is living his best life and he’s found his joy after a journey that took him from Brownsville, Indiana, to Clemson, to Northwestern, and then back to Clemson.

“He’s just soaking it up, man, “Swinney said. “I think he’s really living his best life right now. He loves Clemson and being back here in a completely different experience and perspective. Life brings perspective as you get older. He’s just very self-aware, very knowledgeable and so confident. He gets it on every level. He’s experienced just about everything at that position. He’s just having fun and taking advantage of his reps. He’s super talented and I think he’s kind of found his joy.”

Swinney then said that Johnson is a better quarterback now than he was then, more experienced, and understands the nuances of the game and the position.

“It’s been fun watching Hunter,” Swinney said. “The game is so much slower to him from the last time I had my eyes on him on a football field. He’s a great leader.

Swinney then delved into the quarterback room as a whole, from starter DJ Uiagalelei to backups like Johnson, Cade Klubnik, Billy Wiles, Hunter Helms, and freshman Trent Pearman.

“It’s valuable to have his voice and his arm and his feet,” Swinney said. “As we all know, that position is critical. We’re just really, really blessed and I mean really fortunate to have the guys that we have because I think they can all play. Obviously those three guys (Johnson, Uiagalelei and Klubnik), but Billy Dimes (Wiles) can play and Hunter (Helms) is smart as crap, he knows every detail of everything and is an accurate thrower.

“All of them can go play and I’m super excited to have Trent joining them, so it’s just a really, really good, functional room. And we have not had that type of functionality, we’ve had to kind of create it here and there, but it makes a big difference.”