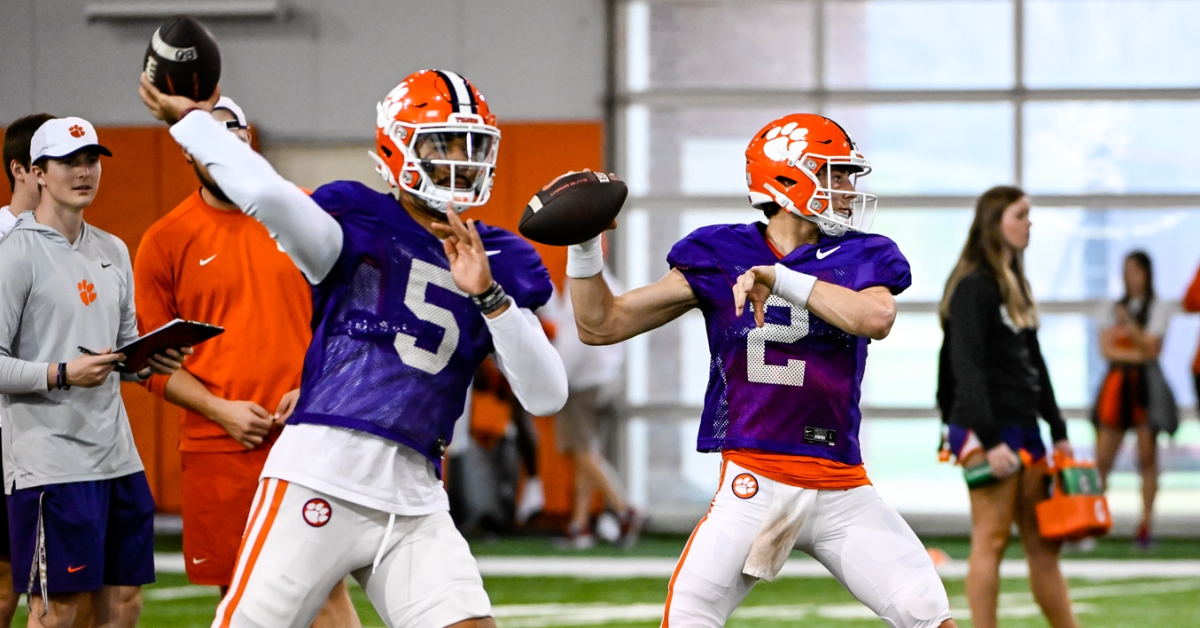 Quarterback will be a spot to watch in that potential rebound.

There has been much written about what went wrong with Clemson’s offense in 2021. I won’t make you suffer through all the details of those struggles again but suffice it to say that every single position group on the offense either disappointed or was severely limited by injuries.

Can it all be fixed in a year? Well, there are a lot of new coaches trying to do just that. Let’s look at what will have to happen and who will have to do it for the Clemson Tigers offense return to a championship-caliber of play.

As we all know, Clemson went from having the eventual No. 1 pick of the NFL draft to having one of the bottom-rated passers in the ACC. QB DJ Uiagalelei was a blue-chip recruit who looked excellent in two games as a freshman, which made his struggles rather surprising. Determining the cause is a bit of a chicken and egg situation as Uiagalelei’s accuracy and pocket presence were clearly issues, but so were many things around him (which we’ll dive into).

The good news is that it almost certainly will get better, it is just a matter of how much better. His supporting cast is primed for improvement even if it is simply a matter of better health luck. With a full year of experience, an off-season of healing from knee and finger injuries, and a new slimmed-down frame, he should up his game as well. If he doesn’t, new five-star freshman Cade Klubnik is waiting in the wings. With a fallback option available, QB-play at the level we saw last year seems exceedingly unlikely.

Since Hunter Renfrow graduated, the Tigers have not had a reliable presence in the slot. Last year, they moved Justyn Ross, a tall outside receiver, there but the experiment was unsuccessful. Eventually, true freshman Beaux Collins filled the role and had some strong performances, but not really in the traditional way that the slot position is intended to be used.

This year, there are a whole host of options that weren’t available last year. Brannon Spector has been at Clemson for three years and returns for his redshirt junior season with a chance to finally make a big impact on the field. He likely would have started last season if not for respiratory issues that necessitated a redshirt. With that thankfully cleared up and his fitness level back to playing shape, 2022 feels like his big year.

Troy Stellato is a player worth getting excited about. Injuries prevented him from making a big splash last year. He may have even started the final few games of the season if not for a bone bruise on his heel. Instead, like Brannon Spector, he redshirted.

He was a four-star recruit with offers from wide receiver factories Ohio State and Alabama. A 247Sports scout said back in high school that he “thrives working the short to intermediate passing game” and that he should develop into a Power 5 starter.

Of course, don’t forget Will Taylor who the Tigers used as a gadget running QB until a torn ACL ended his football season and delayed his Clemson baseball debut. Now, he is fully moved from QB to slot receiver. The rising sophomore has a chance to become a two-sport star and big-time fan favorite.

Adding to all those options is incoming four-star freshman Antonio Williams. He had offers from Notre Dame, Georgia, Auburn, Ole Miss, and plenty of other major Power 5 programs. He is 6-foot tall and known for his speed. I seldom expect an impact from true freshmen, but he seems pretty good as a fourth option here.

There’s really no excuse for this problem to not be resolved in 2022. This may be the issue that I’m most confident gets fixed simply because there are so many ways it could be done.

Last year, Clemson’s receivers struggled to get separation and give the QB easy targets. To compound the matter, they didn’t win a whole lot of 50-50 balls either. In fact, there were some cases where it seemed they didn’t battle for them enough. There were also communication issues with the QB. All this makes it easy to assume that it has to get better, but I’m still a bit hesitant.

Justyn Ross, despite his issues, was Clemson’s best receiver per PFF grades last season and now he is gone to the Kansas City Chiefs. Frank Ladson was never a significant contributor so his transfer to Miami doesn’t raise a lot of concern, but the remaining list of options is scant.

Joseph Ngata, EJ Williams, Dacari Collins, and Beaux Collins are the four primary names we’ll hear about in fall camp battling for starting positions. While four players for the lone slot receiver role sounded good, four players for the two wide-out positions seems a bit thin. I was hoping Clemson would be aggressive in the portal and add to these options – perhaps with someone like Jermaine Burton who went from Georgia to Alabama – but it was not to be.

For the first half of last season, Ngata looked ready to emerge as a top pass-catching option, but injuries yet again ruined his season. EJ Williams was just a sophomore last season, but injuries prevented him from building on a strong freshman campaign. Dacari and Beaux Collins both showed flashes at times last year but will be just sophomores and as such have little track record. The Tigers don’t just need one of these players to step up, they need several. That’s where you start needing things to break in your favor.

One thing that could help the cause is the expanded roles of Coach Streeter and Coach Richardson. Over the past few seasons, Clemson has really gotten away from the tempo that former offensive coordinator Chad Morris installed back in 2011. Although we didn’t see it in the spring game, Streeter has said bringing that back is a focus for the offense.

Whenever the offense was forced into playing with tempo at the end of halves, they seemed to find a better rhythm. It was as if they stopped overthinking and their talent took over. It was vexing that they couldn’t do it more often after seeing it work in those situations. It seems that Coach Streeter will try to bring that tempo back and perhaps that will allow the QB and WRs the sync up in a way they seldom did last season. They’ve also talked about cutting back the number of plays and instead giving receivers more post-snap options. This seems like a very positive change that could help the passing game overcome some of the issues they encountered last season.

Jordan McFadden is one of Clemson’s most underrated players. He is back at left tackle and Walker Parks will play opposite him at right tackle. Those are solid bookends, but there are a ton of questions about the interior offensive line.

The O-line struggled immensely in 2020 so coming into 2021 we were heartened to hear about the strides they made in fall camp and how they would be so much better. That never came to fruition. In fact, that hope was painfully dashed right in the season opener when they allowed a whopping seven sacks to the Bulldogs.

Now Clemson has lost their top two options at center (Mason Trotter and Hunter Rayburn). In what feels like a re-run of Matt Bockhorst’s ill-fated move from guard to center, Will Putnam will try to make the same switch. Marcus Tate, Mitchell Mayes, Dietrick Pennington, Bryn Tucker, and Trent Howard will compete for the starting guard positions. Those are certainly talented players who have loads of potential, but experience and depth are king on the offensive line and having more players with more experience at their given position would lend more confidence. Clemson tried to land a transfer but was unable to close the deal.

Perhaps Thomas Austin, the new O-line coach, can get this unit to play at a level we haven’t seen in a few years. While they could take a step forward, I’ve been burned here before and am reluctant to be optimistic about this always mercurial position.

Clemson ended the season with a three-headed monster at running back as Will Shipley, Kobe Pace, and Phil Mafah all got carries. That makes it easy to forget the trouble and acrimony the RB room faced during the season. Chez Mellusi transferred to Wisconsin just before the season. Lyn-J Dixon was in the doghouse early in the year and then transferred mid-season as did Michel Dukes. All that to say they had their issues last year, but headed into 2022, this looks like one of the biggest strengths for the offense. If the offensive line struggles, the staff will have to get creative and find ways for this group to be impactful because they absolutely cannot be wasted. The running backs are some of the offense’s brightest stars.

This is one of the most interesting positions for Clemson in 2022. Braden Galloway was suspended for the 2019 season due to a positive ostarine test. He came back in 2020 and posted 27 receptions and 369 yards across 12 starts. It stood to reason he would be a big part of the 2021 offense, but instead he regressed immensely. His drop rate shot up, his pass blocking was lacking, and he didn’t find himself open very often. He was targeted just 10 times and only had four catches all season. After three games, he lost the starting job to Davis Allen. Galloway separated his shoulder against Pittsburgh to end his season.

Fortunately, Davis Allen was able to step in adequately but didn’t post huge numbers, finishing the year with 28 catches for 208 yards and 3 TDs. True freshman Jake Briningstool also had a few flashes late in the year too. Overall, it was a disappointing year for Clemson tight ends, but there’s reason for hope. Davis Allen is back, and rising sophomore Jake Briningstool led the White team with 58 receiving yards in the spring game. The duo should get nearly all the meaningful snaps at tight end and give Clemson their best season from the position in years.

Clemson’s offense was beyond disappointing last year, and unfortunately, it wasn’t just because the QB play was poor. The QB play should be better, but I would stop short of expecting it to fully return to elite levels. The slot receiver position should be an area that gets a lot better, but there may still be issues with the boundary (9) and field (2) receiver positions. The offensive line could get better, but with players switching positions and the failure to land an impact transfer, it is far from a lock.

Running back should be a strength of the team if they can stay reasonably healthy and with Allen coming back after starting 10 games and Briningstool behind him the tight end group may finally return to being a big part of the offense.

All in all, it’s hard to imagine the offense not taking some big steps forward, but it still may be a gear behind where it was during the 2015-2020 seasons.