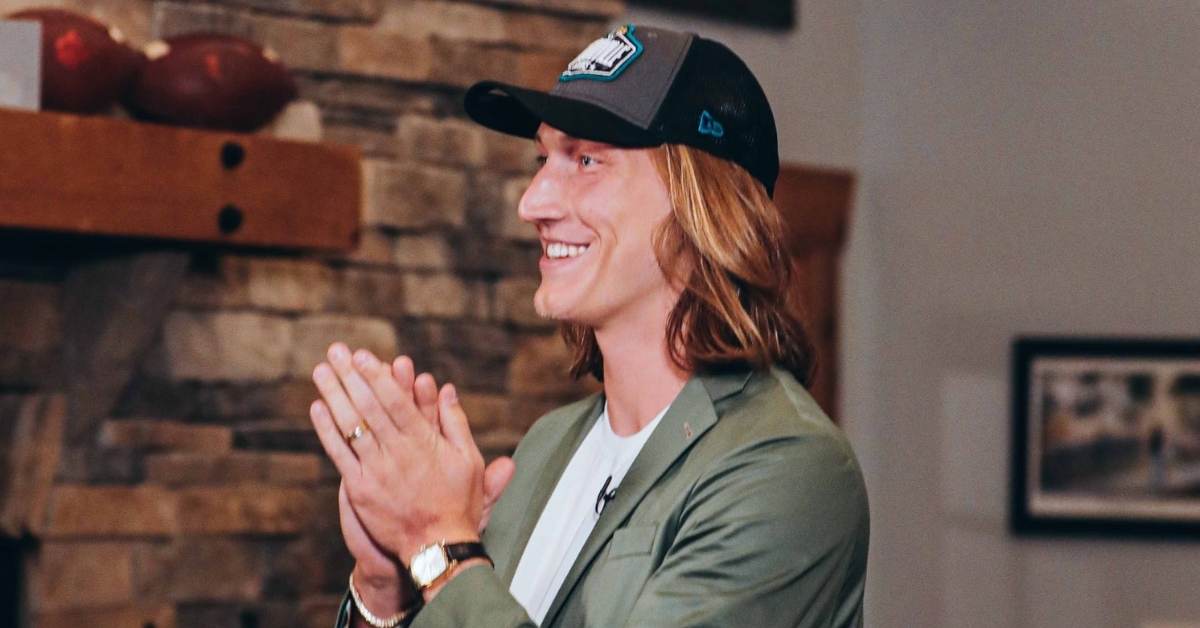 Trevor Lawrence leaves quite a legacy in Clemson and is ready for a lot more in the NFL (Photo per Lawrence's Twitter).

Trevor Lawrence made some long-awaited Clemson history Thursday night as the school’s first NFL draft No. 1 overall pick. The Jacksonville Jaguars made the long-expected selection to kick-start their rebuild under new coach Urban Meyer.

Lawrence, who celebrated the occasion in the Clemson area, leaves town as the winningest QB in school history and a national champion. He joins Mario Williams (NC State) and Jameis Winston (Florida State) as the only three ACC football players to be chosen with the No. 1 overall pick.

"It's pretty surreal. Obviously this has been the dream for the past few years," Lawrence said. "And like I've said before, I didn't even dream this as a kid. Really special and having all the people I care about here and watch -- it's really hard to explain honestly. I was super-nervous before and so excited to be a part of the Jacksonville community...I'm super-excited to get down to Jacksonville and be with you guys. I'm ready to get to work."

Lawrence marks the 14th first-round selection under Dabo Swinney -- and a sixth in the last three drafts (college and now pro teammate Travis Etienne was the seventh later in the night).

“The Jaguars are getting a winner, capital W-I-N-N-E-R, WINNER,” Clemson coach Dabo Swinney said in a school news release. “They’re getting a great human being, great leader and a highly skilled football player.”

The Cartersville, Georgia product tossed for 10,098 yards with 90 touchdowns to 17 interceptions as a Tiger. He also rushed for the fifth-most career rushing touchdowns by Clemson quarterback (18) with 943 total rushing yards.

"This kid has been on the big stage his whole life and this is not going to be too big for him," NFL Network's Daniel Jeremiah said.

He finished second in the 2020 Heisman voting to tie a school-best with 3,153 passing yards and 24 touchdowns to five interceptions and also eight rushing touchdowns.

“I can’t say enough good things about Trevor Lawrence and what he’s about not only on the field but especially off the field," Clemson QB coach Brandon Streeter said in a school news release. "Obviously, his talent that we all see is ridiculous, but in all areas he has performed so well. I’m just excited about his opportunity to move on to the next level. I think his locker room presence, him being an unbelievable teammate and just his character in general are off the charts. His perspective on life is exactly what you want. I’m so proud of him and excited for this opportunity in his life.”

The Jaguars are coming off of a 1-15 season and last fielded a winning campaign in 2017 after a run to the AFC Championship Game.

- Clemson extended its streak of consecutive drafts with at least one selection to 19 since 2003, representing the second-longest streak in school history behind a 24-year streak across the 1951-74 NFL Drafts.

- Lawrence became the 65th player to have played for Head Coach Dabo Swinney to be drafted into the NFL, including the 14th first-round pick of Swinney’s tenure.

- He represents Clemson’s 35th first-round pick in the NFL Draft all-time, dating back to Banks McFadden’s selection by the NFL’s Brooklyn Dodgers with the fourth overall pick in the 1940 NFL Draft.

- Lawrence became the second Clemson player drafted by the Jaguars since the franchise’s debut in 1995. He joins defensive end Andre Branch, whom the Jaguars selected in the second round (No. 38 overall) in 2012.

- He became Clemson’s 13th Top 10 pick all-time and, including the No. 4 overall pick of Clelin Ferrell in 2019 and the No. 8 overall pick of Isaiah Simmons in 2020, gave Clemson three consecutive drafts with a Top 10 selection for the first time in Clemson history. Prior to the current run, Clemson had previously twice had Top 10 picks in back-to-back drafts, including 1982-83 with Jeff Bryant and Terry Kinard and 2014-15 with Sammy Watkins and Vic Beasley.

QB @Trevorlawrencee finished his @ClemsonFB career with a 34-2 record, the third-best winning % by a starting quarterback with at least 30 career starts.

"He can do [it all] and his best traits are his leadership ability and ability to connect with teammates." - @BuckyBrooks pic.twitter.com/5JqfyjodiK

LETS GOOOOO!!!!!!! So excited to be in Jacksonville. The best is yet to come. #DUUUVAL

The long presumed No. 1 pick is now OFFICIALLY the No. 1 overall pick!

Trevor Lawrence is the No. 1 pick in the 2021 #NFLDraft@ClemsonFB | @Jaguars pic.twitter.com/lKYCbs6nZa

A CFP national title as a freshman. ????

Back-to-back trips to the #NationalChampionship.

Congrats to @ClemsonFB's @Trevorlawrencee, who is headed to the @Jaguars as the first overall pick in the 2021 #NFLDraft.#DUUUVAL #AllIn pic.twitter.com/WCcrlGMEvk

Looks good on ya, @Trevorlawrencee!