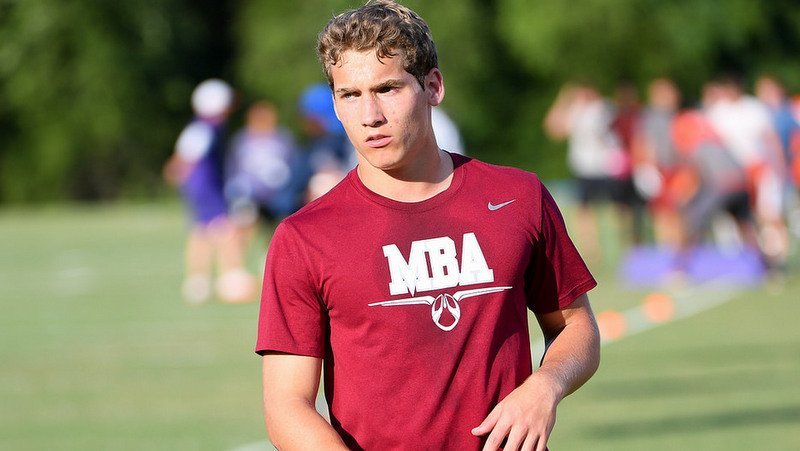 Jake Herbstreit and Tye Herbstreit grew up visiting the best college campuses in the nation, but also grew up with the legacy of a grandfather and father that both played for Ohio St. The twins grew up loving the sound of a college football Saturday at The Horseshoe in Columbus as the Buckeye faithful cheered at full throat.

When it came time to make their own decision for college, however, Clemson head coach Dabo Swinney and the Tigers were too good to pass up.

Jake is a 6-0, 175-pound defensive back while Tye is a 5-11, 160-pound wide receiver at Montgomery Bell Academy in Nashville, Tennessee. They are the sons of ESPN/ABC college football analyst Kirk Herbstreit.

Kirk Herbstreit hasn’t made his admiration of Swinney a secret, and it was a conversation between the two families that led to a Clemson offer for Jake and Tye.

“I think my parents were talking to some coaches. I don’t really know if they had been working towards that,” Jake told TigerNet. “But they said they were really impressed and Coach Swinney said that they might be willing to give us a preferred walk-on spot. They were really excited and I was super excited obviously.”

Tye said that plenty of schools made overtures, but Clemson is the perfect fit.

“We had a lot of schools on our minds. I guess just after we went to Clemson football camp,” Tye said. “It was definitely one of the schools I wanted to go to and I wanted to check out. At the end of that camp, Coach Jeff Scott came up to me and said he was going to offer us preferred walk-on spots. I thought that was really cool. We also got preferred walk-on offers after that. That kind of led to other preferred walk-ons and interest from other schools like USC but after meeting the coaches and going on our unofficial visit and meeting Dabo we just think it is the perfect fit for us. We are just really blessed to possibly be a part of such a great program.”

The twins’ grandfather, Jim Herbstreit, was a captain on the 1960 Ohio St. football team. Kirk later became a captain as a quarterback for the Buckeyes from 1989-93 before taking over as one the nation’s top analysts for ABC/ESPN.

Jake and Tye grew up loving the Buckeyes, but both also wanted to make their own mark on the world. Clemson gives them a chance to do just that.

“All my life I have grown up being a Buckeye fan,” Jake said. “Going to the games and all that. My dad and my grandfather both played there. I’ve always loved the Buckeyes, but I just kind of wanted to choose my own path and go out and have a different experience other than up north.”

“I’m excited. I’m still a Buckeye fan at heart, but I’m excited to rep some new jerseys and I’m just really excited to be a part of Clemson. It’s really amazing,” Tye said.

Jake said he started taking notice of the Tigers because his dad had such high praise for the Clemson program.

“Death Valley is such a cool place to watch a game, but it is even better to play,” he said. “It’s just so cool with how steep it is and just how loud the stadium gets. It’s right up there with Ohio State, one of the biggest stadiums. I just think the fans love it too and it’s really cool after every game, win or lose, the fans rush the field which is awesome.” A preferred walk-on offer is no guarantee of playing time, but both only have to look at players like Hunter Renfrow and Greg Huegel to know that hard work and effort can translate into a spot on the depth chart.

“They definitely have shown that walk-ons can succeed in this system,” Jake said. “I did a few unofficial visits and I just noticed how welcoming everybody is and everybody is treated as equal. The way it should be. It’s just a great place to be especially for a walk-on.”

As for Tye, an unofficial visit for Clemson’s win over NC State helped seal the deal.

“I came in on an unofficial for the NC State game, Tye said. “But before then, I kind of made the conscious decision this is where I want to go.”

Jake told TigerNet that receiving a Clemson offer was an honor, but now he’s ready to call the foothills of South Carolina home.

“Obviously when the offer came in, that was crazy,” Jake said. “I knew they had heard of me, and when I came to camp and was able to perform for them and impress them, that was something special. I have always loved Clemson and Coach Swinney because he has always done such a great job. I knew right away that was the place for me.”