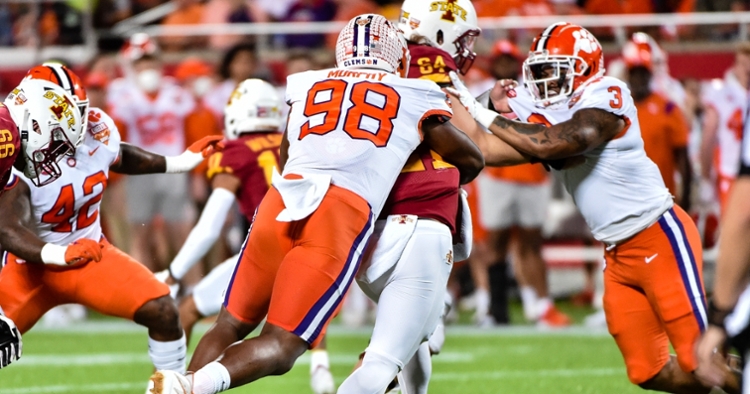 CLEMSON – Defensive ends coach Lemanski Hall plans to use a six-man rotation this season, but he is still expecting a huge season from rising junior Myles Murphy.

Hall heads into the summer feeling good about the depth he has at his position – Murphy, Justin Mascoll, Xavier Thomas, and KJ Henry have all started games for the Tigers and bring a wealth of experience to the position.

However, Hall has plans for Kevin Swint and Greg Williams – both are converted linebackers – to join that foursome to make for six players he feels like he can count on.

“I would love to go in with six guys and then see what happens,” Hall said. “That is kind of the rotation this year, even this spring. I had a chance to put Greg and Kevin with the first group just to see what they can do. They did a great job.”

Hall has a reason for wanting to get Swint and Williams valuable snaps during the season – Murphy could elect to declare for the NFL Draft if he has a solid season, while the others are out of eligibility after this season.

That means he needs to learn to trust those less-experienced players.

Hall made sure that both Williams and Swint saw extended action this spring, along with redshirt freshmen Zaire Patterson and Cade Denhoff.

“In order for that to work, I have to get the young guys some reps. That is my mentality going in,” he said. “At the end of the day, like Coach says, ‘You have to earn the right to play.’ I am not going to put a guy in there that cannot get it done. Then, I am jeopardizing the team, and I don’t ever want to do that.”

As for Murphy, Hall thinks the Georgia native is poised for a breakout season.

“I think about Myles Murphy, for example,” Hall said. “Myles is in better shape. He’s gotten more powerful, explosive. His point of attack has been tremendous. His pass-rush has gotten a lot better. He’s become more of a leader, and I’m excited about that.”

A second-team All-ACC selection in 2021, Murphy was credited with 43 tackles, a team-high 14.0 tackles for loss and 7.0 sacks, two forced fumbles and two pass breakups over 13 games (10 starts).

“He is what I thought he would be when we recruited him,” Hall said. “I expect Myles Murphy to have double-digit sacks this fall.”