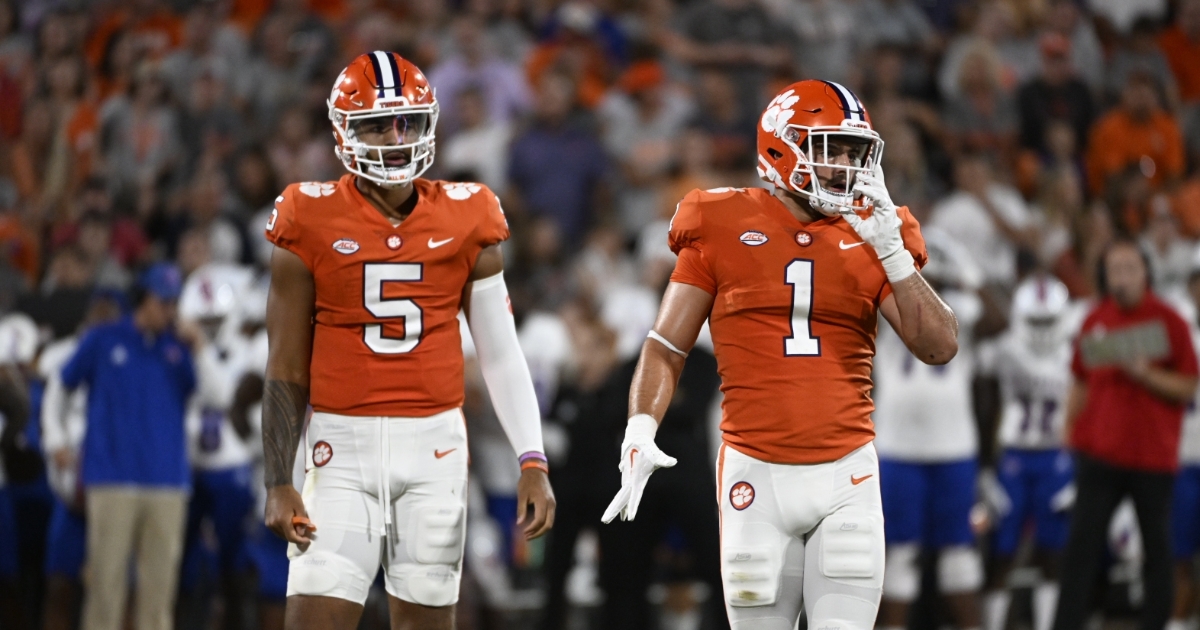 CLEMSON – The only thing pretty or exciting about the first half of the game against Louisiana Tech was Clemson’s entrance and pre-game light show.

Many of the concerns that Clemson fans have had through the first two games continued to manifest themselves as Clemson trudged out to a 13-6 first-half lead over the Bulldogs.

PLAYERS OF THE HALF: Clemson quarterback DJ Uiagelelei looked as confident and comfortable as we have seen him since his freshman year. He was 12-of-20 for 144 yards and carried the ball six times for 42 yards.

*Freshman Antonio Williams continues to impress, making his one target count by hauling in a 38-yard pass from Uiagalelei.

*RJ Mickens has been impressive on defense. Mickens got the start in place of the injured Andrew Mukuba and came up with a big interception in the first quarter on a trick play.

STAT OF THE HALF: Clemson’s defense has five tackles for loss for 12 yards.

WHAT’S WORKING FOR THE TIGERS:

*Droppin’ Dimes – Uiagalelei had his deep passes dialed in during the first half. On Clemson’s first-quarter touchdown drive, the junior signal caller connected with Joseph Ngata for 41 yards. Two plays later, Will Shipley found pay dirt.

On Clemson’s first drive of the second quarter, Uiagalelei completed a 38-yard pass to Antonio Williams that led to a BT Potter field goal and a 13-3 Clemson lead.

*La Tech One-Dimensional – All of the Bulldogs’ first-half offense came through the air. Three Louisiana Tech rushers combined for four yards on 10 carries.

WHAT’S NOT WORKING FOR THE TIGERS:

*Special teams’ gaffe – Clemson’s Payton Page blocked a 56-yard field goal attempt by the Bulldogs that linebacker Barrett Carter picked up to try and return. Carter had it knocked out as he was going to the ground giving Louisiana Tech an extra possession.

*Big play busts – Clemson’s defense played well for most of the first half but gave up big chunk plays that led to points for the Bulldogs. Louisiana Tech quarterback Parker McNeil had completions of 31, 38, and 19 yards. Those 88 yards constituted over half of the Bulldogs' first-half offense.

WHAT THE TIGERS NEED TO DO WIN: Clemson needs to make the most of its offensive possessions because it's obvious that, just like last week, possessions are going to be hard to come by. Uiagalelei and the offense played with a good tempo for most of the first half and were very balanced.

I thought tackling was much better during the first half than we have seen so far this season. If the defense can clean up some of the mistakes in coverage, they should be able to keep Louisiana Tech in check.