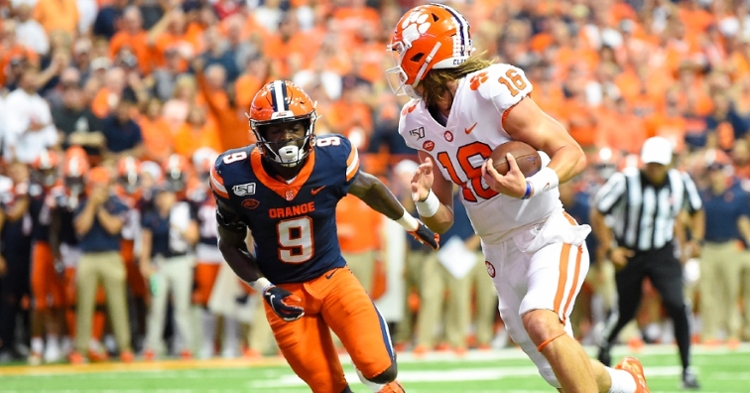 Trevor Lawrence looks back as he scores (Photo by Rich Barnes, USAT)

SYRACUSE, NEW YORK – After a half highlighted by sloppy offense, lots of penalties and superb defense, No. 1 Clemson finds itself leading Syracuse 17-6 at halftime in The Dome.

There were too many dropped passes and empty plays for Clemson’s offense to be efficient as the Tigers ran 38 plays for 248 total yards. Syracuse ran 33 plays for 127 yards.

PLAYER OF THE HALF: Tee Higgins has been Mr. Clutch for Clemson in the first half making big catch after big catch. Higgins was on the receiving end of a 35-yard pass from Trevor Lawrence on Clemson’s second scoring drive of the game. In the first half, Higgins caught seven passes for 150 yards.

STAT OF THE HALF: Amari Rodgers caught a touchdown pass in front of the first sellout crowd at Syracuse since his father, Tee Martin, quarterbacked Tennessee at Syracuse in the 1998 season opener. Tennessee won that game 34-33.

*Defense – Save for one drive late in the second quarter, Clemson’s defense was phenomenal in the first half. The Tigers pressured Cuse quarterback Tommy DeVito and didn’t allow him to get into any sort of rhythm.

*Amari is back – Clemson’s offense is more efficient and smoother with Amari Rodgers in the game. Rodgers – who tore his ACL in the spring – caught his first touchdown pass of the season and looks to be quickly getting back into playing shape.

*Too many short drives – Clemson had five drives of six plays or less. Four of those drives ended in punts, while the other one ended with a B.T. Potter field goal.

TURNING POINT OF THE HALF: Each team punted on its first possession but the Tigers went right to work on their second possession. Lawrence threw a ball up that Tee Higgins high-pointed for a 16-yard gain on third down, and a few plays later Amari Rodgers took the top off the defense and gathered in a 16-yard pass in the end zone for a 7-0 Clemson lead.

WHAT CLEMSON NEEDS TO DO TO WIN: Offensively, the Tigers need to find some balance. So far, Clemson hasn’t been able to get the running game going, rushing Etienne and Lyn-J Dixon just a combined 11 times.