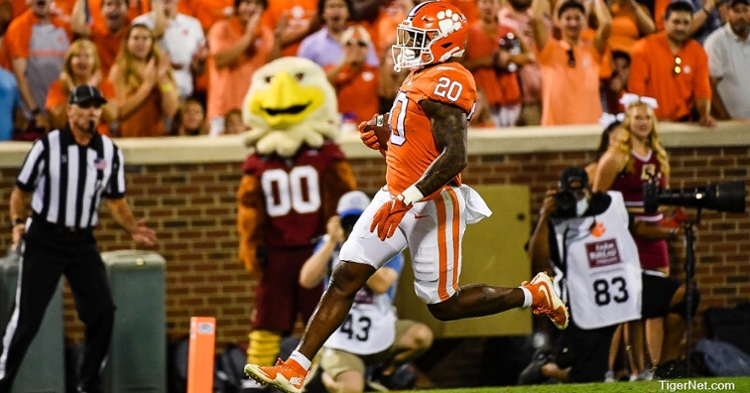 CLEMSON – Injuries, ejections, and lineup changes were all big stories on Homecoming Saturday evening, but Clemson overcame the odds and fashioned a 13-6 lead over Boston College at the half Saturday in Death Valley.

PLAYER OF THE HALF: The running backs. Clemson has struggled to get its running game going this season, but the combined efforts of Kobe Pace and Phil Mafah sparked the Clemson offense in the first half. Pace returned to starting duties after Will Shipley's injury against N.C. State and Mafah got his first carries of his young career. Pace had six carries for 76 yards, including a 59-yard touchdown. Mafah added four carries for 50 yards.

STAT OF THE HALF: Clemson has 255 yards of total offense, just 31 yards shy of what the Tigers managed in the entire game against Georgia Tech.

WHAT WENT RIGHT: While the Clemson offense didn't put up a lot of points, it definitely looked better than it had through the first four games. There were more pre-snap motion and more plays – screens, pitches to running backs, downfield throws – that we're used to seeing from the Tigers. Moving Matt Bockhorst to right guard has opened up holes on the right side of the line for the running backs. The line as a whole and the wide receivers are blocking better. DJ Uiagalelei looks more comfortable than he has all season.

Defensively, Clemson just continues to do what they do despite the injuries to Tyler Davis and Bryan Bresee.

WHAT WENT WRONG: Injuries and targeting continue to hurt the Tigers. Tight end Braden Galloway left the field after an injury following the first drive, and on the second drive, Will Taylor went to make a cut and slipped on the new Death Valley grass. He was taken to the tent and never returned. Then, on a Clemson punt, starting tight end, Davis Allen was called for targeting and ejected, meaning both of the Tigers' top two and most experienced tight ends were out.

WHAT THE TIGERS NEED TO DO WIN: On offense, the Tigers need to finish drives. The failed fourth-down conversion was on the tail end of a promising drive, and two more drives ended with BT Potter field goals. On defense, the Tigers have to continue with the pressure on BC quarterback Dennis Grosel. Grosel has had way too much time on a few throws, and the Eagles are leaking the tight end across the middle, and he's been wide open more than once.