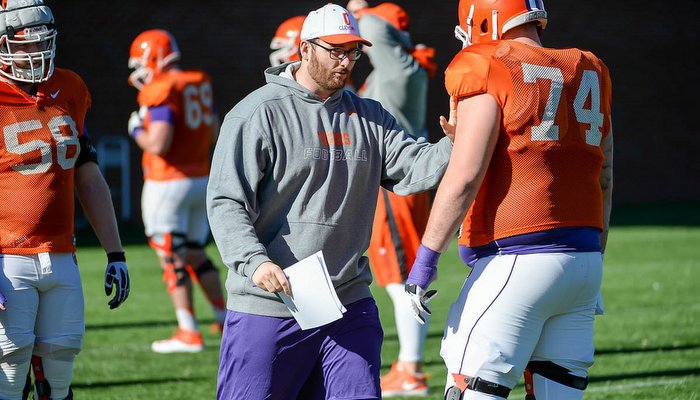 Jay Guillermo
RS So. Center
#57 6-3, 314
Maryville, TN
View Full Profile ’s surprise when he walked into the WestZone to begin bowl practice two weeks ago and found out his boyhood idol would be his coach.

When graduate assistant Dustin Fry decided to follow former offensive coordinator Chad Morris to SMU, Thomas stepped into the breach and will help coach the centers and guards, including Guillermo.

“It is awesome. Like I've told a bunch of the guys, he was my idol in eighth and ninth grade,” Guillermo told TigerNet after practice last week. “He was like my screen background on my phone and everything. It is awesome to have him come and coach. He is such a good coach and he's taught me so much stuff.”

He said the addition of Thomas caught him by surprise.

“I didn't know until last week. The day he got here, I didn't even know,” Guillermo said. “ Ryan Norton

Thomas is known for being soft-spoken, and Guillermo said it’s a nice change of pace to offensive line coach Robbie Caldwell

“Coaches need to be up in your face. But there comes a point when you are trying to teach the technique where they need to just slow down and teach you the technique,” he said. “That is the thing - I haven't seen him get upset yet. He is always so calm and he can walk you through everything. To me, that is the best part about it. And that is what I think already makes him a great coach.

“Coach Caldwell - in my eyes - is the best line coach in the nation. Hands down. And to have a guy who is like Coach Caldwell and knows so much about football and is such a great coach, and then to have a young guy like Thomas gets the NFL aspect into it they complement each other so well.”

Guillermo then mentioned that he hasn’t told Austin about the phone background or the fact that Thomas was the screensaver on his computer.

“I am trying to stay cool with it. I am trying my hardest,” he said with a smile. “Every day I come into the film room and he is sitting there just watching film. And I am like, 'Oh man, this is awesome.' I am kind of star struck.”

Guillermo has battled injuries this season, and said that he hopes the bowl game will be a springboard into a healthy junior season.

“It's been tough with the injuries and everything. But it's football. Injuries happen. So you can't let it get you too far down,” he said. “Never let your highs be too high and your lows be too low. It's been tough, but there is great leadership on this team and I have family members I can call and talk to at any time and they tell me to keep my head on straight and that good things will happen.”