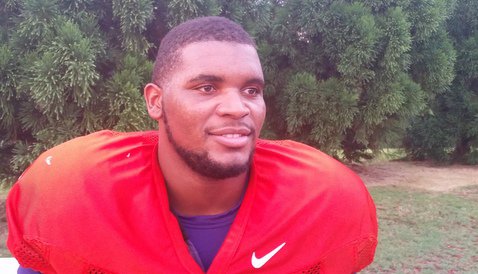 Joe Gore
RS Jr. Offensive Tackle
#73 6-5, 283
Lake Waccamaw, NC
View Full Profile would be out at least the next two weeks after having an emergency appendectomy Wednesday afternoon.

“Joe Gore got appendicitis and they had to take him to the hospital and actually do surgery at five o’clock,” Swinney said. “Everything went well.”

Gore has started three of the four games so far this year and has averaged 47 plays per game. He was not slated to start against NC State, but was to see significant playing time as a backup.

“I know this might sound crazy, but I am glad to know that something was wrong,” Swinney said. “Because he hasn’t been quite the same, and I knew something just wasn’t quite right with him. And he knew something wasn’t right. But I am thankful it all came to a head and we can get him back on track. We need Joe Gore. He had a great camp for us. He had taken a step back the last couple of games and just wasn’t quite where he needed to be. He just said he hasn’t been feeling right. I know the surgery went well. I haven’t spoken to the doctor, but most of the time they can do that laparoscopically, and if that’s the case he can be back sooner. But if they had to cut him it will be a longer recovery time – but I know he is out this week and next week.”

Swinney said the Tigers will have to mix and match on the offensive line.

“It could. It certainly could, and we have talked about that,” he said. “We would really love to hold those two big boys if we can. We are really excited about them. Maverick Morris

Maverick Morris
RS Fr. Offensive Line
#69 6-4, 291
Broxton, GA
View Full Profile is a guy that we still aren’t ready to win with him but we are getting closer to that point.”

“We limited him today and are going to try and let him do a little more tomorrow. He feels a lot better, and it’s a situation where he got some inflammation from that scope he got in camp. For him, it has been a little frustrating, but mentally he is feeling better. We really felt like if we didn’t take a time out right now, it might cost us down the road. He was ready to play last week but we tried to not play him. We will take a look at him tomorrow and see where we are going into this game. I am really going to kind of leave that up to him. I think he knows how he feels better than anybody and we will make that decision tomorrow.”

“Coop is going to play. He has had a good week. He is over the top excited because he is going to be a captain for us. He has continued to be a great leader for us, and even though he couldn’t play he continued to stay engaged and travel with the team. He has gone above and beyond to keep everybody dialed in.”

“I hope so. Choice, we wanted to feature a little bit last week and he got a deep thigh bruise. We have had to limit him a little this week. It can be very painful. Gallman, we kind of have to grow him up. Sometimes he is so fast he is out of control, and we have to trust him. Sometimes with a young guy you get in the heat of battle and you lose your guts a little bit. He had a couple of big mistakes early and Tony (Elliott) just lost confidence in him a little bit.”