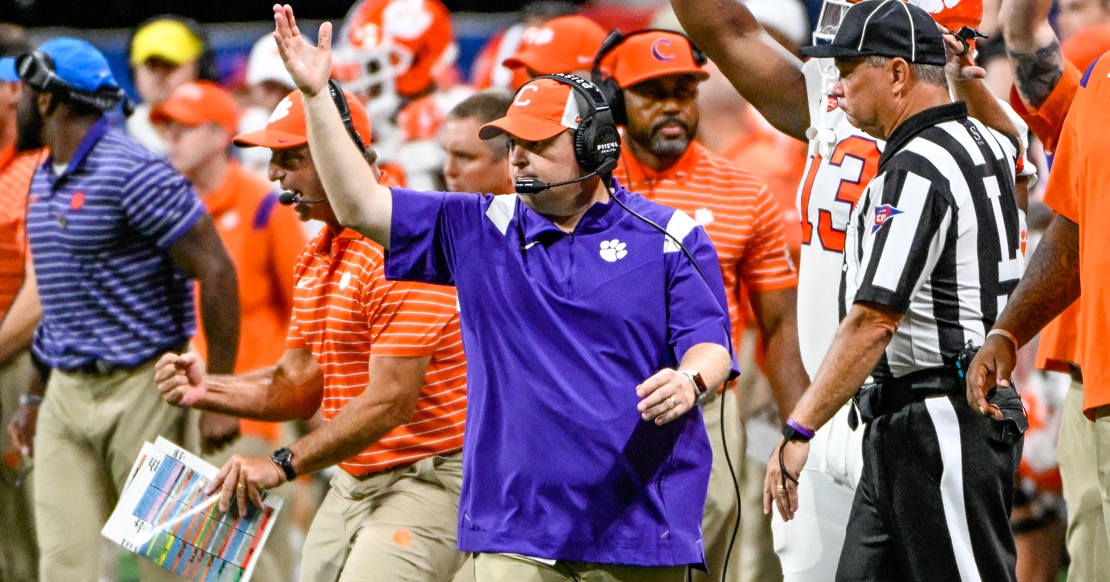 CLEMSON – There were so many screens in Death Valley Saturday afternoon that it felt like a home improvement warehouse, and defensive coordinator Wes Goodwin is expecting more of the same this weekend against Louisiana Tech’s Air Raid offense.

The Bulldogs, coached by former Texas Tech quarterback Sonny Cumbie, have thrown for 556 yards this season, with six touchdowns against four interceptions. Senior Parker McNeil, who came from Texas Tech with Cumbie, took most of the snaps last week against Stephen F. Austin and is likely to start this week against the Tigers. He has completed 18-of-34 passes for 339 yards with five scores and an interception.

Goodwin said the Bulldogs have a challenging offense.

"I think it's going to be a good challenge for us no doubt. The quarterback (McNeil) came with the coach from Texas Tech, so he's a system guy and understands what they're doing and knows where to distribute the ball,” Goodwin said. “Running back, they have a downhill runner and a short-area, twitchy guy as well. Up front, they have three that return with experience.

“Center and guard really solid players. Tight end has really good speed and first two games he's taken two slants to the house. No. 3 (wide receiver Tre Harris) has good size, catches the ball well in traffic and does a lot of things well. Have a short-area slot guy we'll have to get our hands on too. Obviously the coach is an Air Raid guy, so have to be alert and make the in-game adjustments."

Both Furman and Georgia Tech have taken advantage of the Tigers’ aggressiveness with multiple screens and quick passes to the perimeter. Goodwin expects more of the same against the Bulldogs.

"Oh yeah most definitely,” he said. “That's what all these guys do, running backs and receivers, quick game, mesh routes. So have to be prepared."

"We came out well and then gave up the big play on the first third down, and it's crazy sometimes how you give up a big play and it completely changes the momentum and energy,” Goodwin said. “We'll be excited to get back in the Valley on Saturday night and we'll definitely be juiced up ready to go."

What went wrong against the Paladins?

“The completion percentage (30-of-39) was too high. We have to do a better job of press man,” Goodwin said. “Twenty-five of 31 completions were within five yards of the line of scrimmage, so the ball was coming out quick, and we need to do a better job of filling the screens. When you're an aggressive front, people will screen you to death.

"Ball is coming out so quick, but we have to do a good job of contesting all the quick-game throws, whether getting our hands up up front or playing tighter coverage. Have to catch and absorb those routes and be tighter. A couple of times we didn't hug the back in man coverage. Have a pressure call, you're coming free for a reason, so you have to slam on brakes and react."