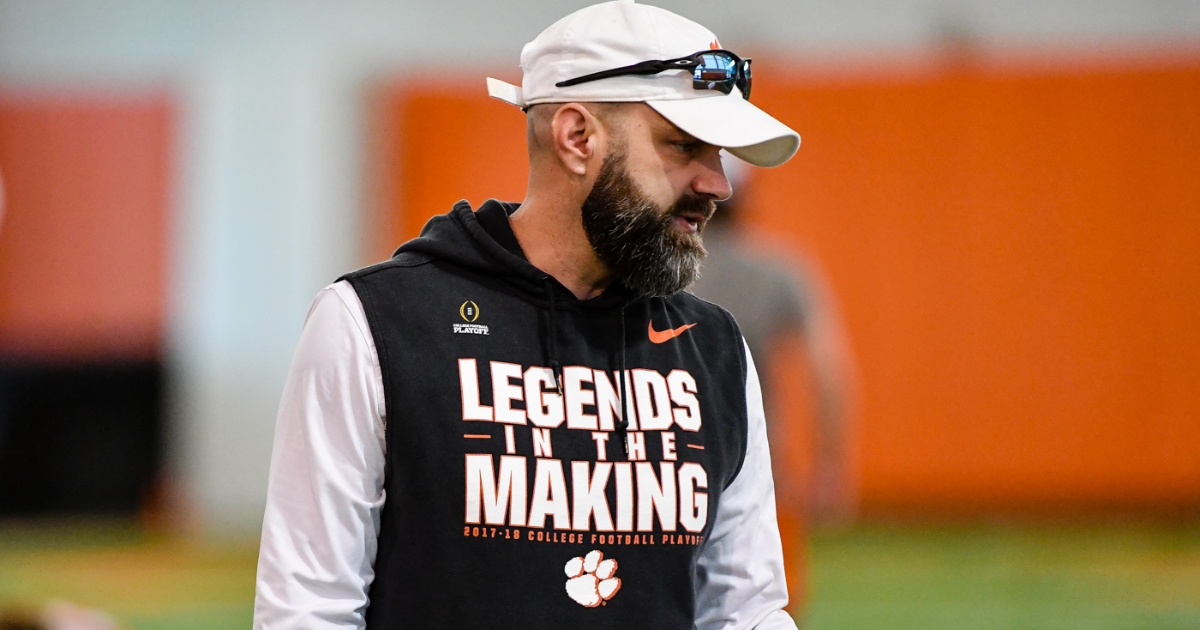 Clemson head coach Dabo Swinney says that Godwinks are a higher power’s way of saying that some things were meant to happen, and new tight ends coach Kyle Richardson thinks a Godwink kept him in Clemson and out of high school football.

Richardson was formally named as Clemson’s passing game coordinator and tight ends coach on Dec. 14, 2021 prior to Clemson’s victory against Iowa State in the 2021 Cheez-It Bowl. Although he is entering his first full season in an on-field role at Clemson, 2022 will represent his seventh season on Clemson’s staff.

Richardson served in numerous capacities at Clemson prior to assuming his current position, including tenures as Senior Offensive Assistant and Director of Player Development and Freshman Transition. He was also a key off-field contributor to Clemson’s offensive success in support staff roles from 2016-21. Clemson’s balanced attack resulted in the Tigers being one of only three teams in the country with at least 16,000 cumulative rushing yards and at least 23,000 total passing yards across those six seasons.

However, Richardson’s passion is on the field as a coach, and when the college football regular season ended, he eyed a return to the high school ranks, where he was successful during a tenure at Northwestern. At Northwestern, he led a program that won a pair of Class 4A-Division II state titles during his five-years.

Following the 2015 season, however, Swinney hired Richardson away from Northwestern to become an offensive analyst with the hope that Richardson would one day take over as an on-field coach. However, Clemson’s offensive coaching ranks stayed stable except for when Jeff Scott took over at South Florida a few years ago. He was replaced by Tyler Grisham, and Richardson began to despair of ever getting a chance to get back on the field.

One particularly attractive job opened up in December – likely Dorman – and Richardson decided to pursue the opening. Then the Godwink happened.

"There was one high school job in South Carolina, and I won't name it, but if it opened up, then I thought to myself if I still haven't gotten on the field at Clemson yet, I am going to take it,” Richardson said. “Well that job opened and I looked at my wife and started telling her I was going to go after that job. I was done not coaching and done not making an impact with these kids. Crazy enough, about an hour and a half down the road, a day or two later, Virginia hired Tony Elliott. That was a Godwink to me, the timing of it."

Richardson’s new job includes the title of passing game coordinator, and he’s worked with offensive coordinator Brandon Streeter to introduce new passing concepts into an offense and a passing game that had grown stale.

“We lost our confidence last year, and once we lost it, it was hard to get it back,” Richardson said. “I think the biggest thing is me and Streeter sitting down together and kind of talking about, all right, where do we want to go in the future with this? We don’t want to throw it all out the window, but the flip side of it is where do we want to go and grow this thing?

“I think the biggest thing is let’s get back to the basics, where the basics were we put the ball in playmakers’ hands in space and they went and made plays in the passing game. The second thing was maybe we need to simplify some things. Maybe some things have kind of stacked on top of each other year after year after year, and then all of a sudden simple concepts become complex concepts.”

Richardson was all smiles during the interview, happy to be back in his happy place as an on-field coach.

“For me to be able to get back on the field and to be a part of coaching a position, have position meetings and have a position, it’s been a lot different,” Richardson said. “You don’t forget how to coach, but you’ve got to kind of get back on the bike and start pedaling and get used to some things.”