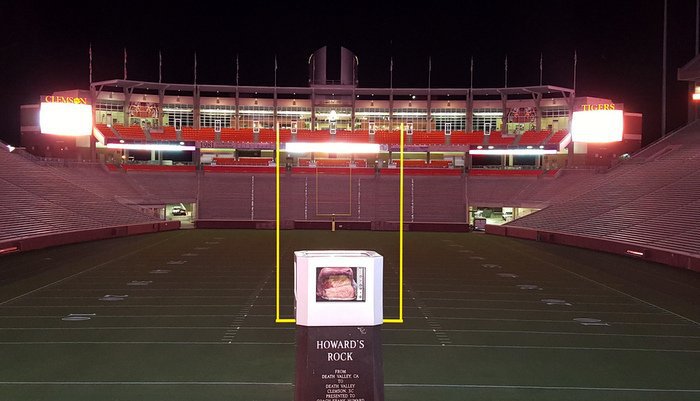 CLEMSON – The afternoon sun that beat down on Clemson’s campus gave way to dusk, and as the last of the August light filtered out through the trees and turned into evening I walked around Clemson’s Death Valley and one thought kept popping up: It’s the same Death Valley, but it’s different.

Nikki and I had spent part of the afternoon at the Tigers’ football practice, and once practice was over we headed to the Hendrix Student Center to upload the videos and write about which freshmen would escape a redshirt this season. Once the working duties were over, we headed back out to the car to take in a gorgeous Clemson evening, and that led to an impromptu tour of the campus we see every day.

However, sometimes we get too used to the things we see. Sometimes we don’t see the things with the eyes of wonder we did at first. We get comfortable and familiar. That all changed last Friday, but let me start from the beginning.

Death Valley is as much a part of Clemson lore as the Tiger Paw, Frank Howard and 1981. It’s where the magic happens.

I wrote this last year about the stadium and our thoughts:

Death Valley at night is electric. It’s loud. It’s an overload of sight and sound, the senses overwhelmed by the swaying of the stadium, the releasing of the balloons; it’s the glare of the lights and the explosion of the fireworks. It’s Tiger Rag and it’s Howard’s Rock and it’s the sound of 80,000 throats in full voice, an orange explosion of emotion.

In a word, it’s breathtaking. Photographers have tried to immortalize the great players and the plays, artists have tried to paint it and writers have tried to describe it. Season after season it moves grown men to the point of tears, and there have been times it feels like the very earth itself has moved.

The entrance is called the Most Exciting 25 Seconds in College Football, and it’s so riveting that “Even Georgia had to take a peek.”

Fast forward to Friday. The media had a chance to talk with Athletic Director Dan Radakovich

Dan Radakovich
Director of Athletics
View Full Profile on the fourth floor of the WestZone, and following a quick Q&A we took a tour of the new press box and club seating areas. In a word…WOW.

Changes have been occurring around the stadium for years…the first few phases of the WestZone turned a metal bleacher section into a thing of beauty, and we’ve all witnessed the changes to the player lounges, recruiting areas, team meeting rooms and dining center. The changes have been nothing short of program changing.

Now we have another game changer.

We walked off the elevators on the second floor outside of the old press box – an area that used to be on an outside concourse – and found ourselves in air-conditioned and enclosed comfort. The area that used to house the main press box and some club seating has been transformed into a premium seating area, complete with full kitchens and storage lockers. Walking around on the inside of a concourse made me think of all the big-time stadiums I’ve been to, both college and NFL.

To be sure, the media’s “areas” have once again changed under Radakovich. No longer is the media given priority at the expense of money, much like when we were moved from press row at Littlejohn Coliseum into the rafters. Up there, it took binoculars and a lot of imagination to believe you knew what was going on down below. The seats on the court were taken away so the school could make money, and the media room at Littlejohn was taken away so the school could make money.

Football is a little different, however, and I wondered what the new press box would look like. No more seats between the 40’s – the press box runs from about the 15-yard line into the back of the end zone, and no longer will the media sit behind a pane of glass. The media will now sit a level below the old press box and directly behind the student section and in the elements. The seating will remain about the same, but there was no doubt an upgrade of some sort was needed.

As proud as we all are of the stadium, we like for others to think it’s special as well. Two years ago, following the Tigers’ win over Georgia in the season opener, I heard two prominent national media members saying they hoped they never had to come back to Clemson because the press facilities were “a dump.” Ouch.

The ACC isn’t known for its great stadiums, but the truth was that when it came to suites for the fans and premium seating and even amenities for the broadcast, web and print media, Clemson had fallen far behind. Schools like Wake Forest, N.C. State, Virginia Tech and Florida St. were all nicer places to go cover a game. No more.

As Nikki and I walked around the stadium and noticed the Oculus and the way the WestZone is rounding into shape, I couldn’t help but notice that the outside of Death Valley has helped morph Clemson Memorial Stadium into one of the top facilities in the country. That includes the NFL.

We then walked to the gate in front of Howard’s Rock, and I took a picture of the stadium under the night lights. The field was bathed in an amber glow, and as I looked across the field memories began to flood my thoughts.

I looked toward the WestZone and saw the corner where Georgia quarterback James Jackson was tackled for a safety in 1987; I saw the spot where C.J. Spiller

James Davis
Running Back
# 6-0, 205
Atlanta, GA
View Full Profile took in the cheers of the crowd during the win over South Carolina in 2008; I saw the spot on the sideline where Rod Gardner made his catch; I looked to the middle of the field where Rodney Williams ran the sprint draw to perfection; I saw Homer to Perry in the corner of the endzone; I saw where DeAndre McDaniel

DeAndre McDaniel
Safety (2007 - 2010)
#2 6-1, 180
Tallahassee, FL
View Full Profile pointed to Christian Ponder and hearing “We Will Rock You” and I remembered Charlie Whitehurst

Danny Ford
Former Head Coach
View Full Profile taking a knee and picking at grass as he pondered his next move, and I remember the electricity of GameDay in 2006.

It’s the same Death Valley, and those spots where those memories occurred are still there. But our stadium now has an oculus and looks different on the inside and the outside. But it’s the same Death Valley, and in 12 days the Clemson faithful will once again flock through the gates in anticipation of another season, a season that could prove to be magical. The old memories are still there. Now it’s time to make some new ones.