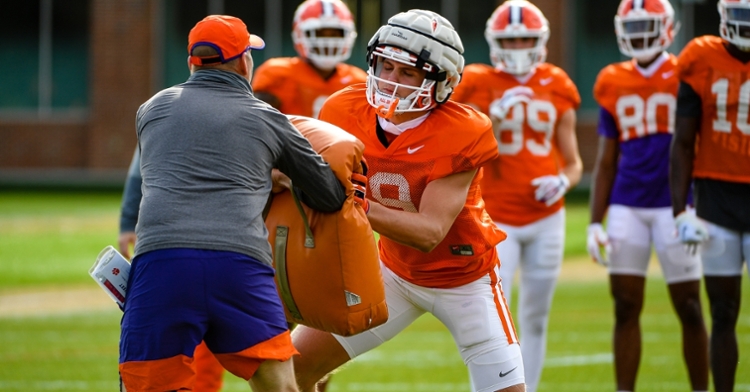 Briningstool has been impressive during spring practice.

Several younger players continue to stand out and receive praise, while one veteran is making life miserable for the offensive line.

The Tigers practiced for a little over two hours Monday evening and have just one practice remaining ahead of Saturday’s spring game. The teams will be decided Thursday during film study, and Friday will be a walkthrough, simulating a normal game week.

In the meantime, it’s never too early or late to talk about the freshmen who have excelled in camp. One of those is tight end Jake Briningstool, who has drawn extra snaps due to injuries suffered by Braden Galloway and Sage Ennis.

“He’s been great. Jake oozes with talent. He’s a great route runner. Really advanced game,” Allen said. “I think in general, him coming in as an early enrollee, I’ve been impressed with his basic understanding of the game. Obviously, it is a learning curve for him. Just a new offense and everything like that, so anything I can do to help, tips or things that I do to help me remember different things, I tell him that.

“But overall, I have been really impressed with him. He brings a great attitude every day. He works hard. He is a really hard worker both on the field and in the weight room. He is going to be something special.”

Ennis, who has a broken bone in his hand, is also showing off.

“I really truly believe that he has a bright future.”

We also spoke with tackle Jordan McFadden, who told us that he has spent the last four or so practices at the left tackle spot after being approached by offensive line coach Robbie Caldwell. During our interview session, McFadden gave his thoughts on freshman center Ryan Linthicum.

“He is a young guy, of course, and it takes a while to learn. It took me forever to learn,” McFadden said. “I think he is coming on. He is a guy that wants to learn. He is a guy that wants to get better. He is a worker. He is strong and he is big. I think he will be a very special player throughout the year. On the offensive line, he has a ways to go before, especially as an offensive line, before you mentality get everything down, but physically he’s got the right stuff.”

“Walker is nasty. He wants to put people in the dirt. You got to love that from him. He is an old fashion nasty guy. He is a hard worker,” McFadden said. “Me and him work out together in the weight room and he is one of the hardest working guys I have met in my whole life. He is just a guy that just constantly wants to get better…I definitely think the hype is real.”

We were able to ask McFadden about defensive tackle Bryan Bresee, who has received a lot of praise over the last two weeks for his play. McFadden said he hates trying to block Bresee, but he also calls it a blessing.

“I have to block him every day. I love him being on my team. Last year, you guys saw him come out and dominate every week,” McFadden said. “He’s just continuing to get better. He is getting bigger. Bryan is one of those guys that will out work people. He is so quick… Shooting gaps, passing rushing, he is a guy that is constantly making plays each and every day.

“I hate it at the moment, but that is what you love to see, especially from a guy like that. Supposed to have a big impact every year. A young guy. It is really just impressive watching him on film and in practice each and every day. It is really a blessing, honestly.”