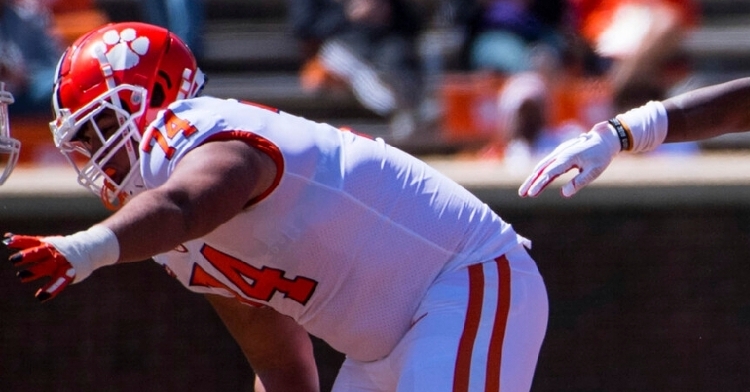 Tate gets in a block Saturday (ACC photo).

Marcus Tate is easy to spot in a crowd of regular-sized people, his 6-6, 290-pound frame enabling him to tower over most of Clemson’s students. On Saturday in Death Valley, in a crowd of people his own size, he was also easy to spot. He was the one delivering crushing blocks to the opposition.

Tate, the youngest member of the Tigers’ football team, is supposed to be enjoying the final months of his senior year at NSU University School in Sunrise, Florida. Instead, he graduated early and enrolled in Clemson in January so he could get an early jump on the competition along the Tigers’ offensive line.

That decision has paid off, according to head coach Dabo Swinney, who says that Tate has earned a spot on the two-deep depth chart.

“He’s one of those guys that looks like he’s been here for a year or so,” Swinney told the media after the game. “So, we’re really excited about Marcus. He’s going to help our team. He’s easily a guy that’s in our two-deep right now, and he’s earned that.”

“He’s an unusual kid in the offensive line,” Swinney said. “He’s still technically a high school senior as a midyear. But he’s unusual, and physically he’s gifted, and he’s further along than most freshmen coming in, in the OL. It’s an incredibly difficult position to play.”

“It’s really not easy to do. It’s definitely not the norm,” Swinney said. “He’s very uncommon when it comes to that part of his development at this point. You never know until you start coaching a guy where they are. Some guys physically have got to get better, or some guys mentally are a ways away. Some guys, it just doesn’t come as easy to them. It’s so much, especially at that position. It’s the hardest position out there, and he’s just been natural.”

Offensive line coach Robbie Caldwell likes to cross-train his players at multiple positions, so while Tate has the frame of a tackle, he can play either inside or outside.

“He can play left tackle, he can play either guard, he can play right tackle,” Swinney said. “So, he can play four positions on our team, and that’s huge for us to not just go play him physically, but mentally he’s really gifted with how he can process things. So, going through the summer for him is going to be huge, getting down in the weight room. But he’s a real bright spot.”